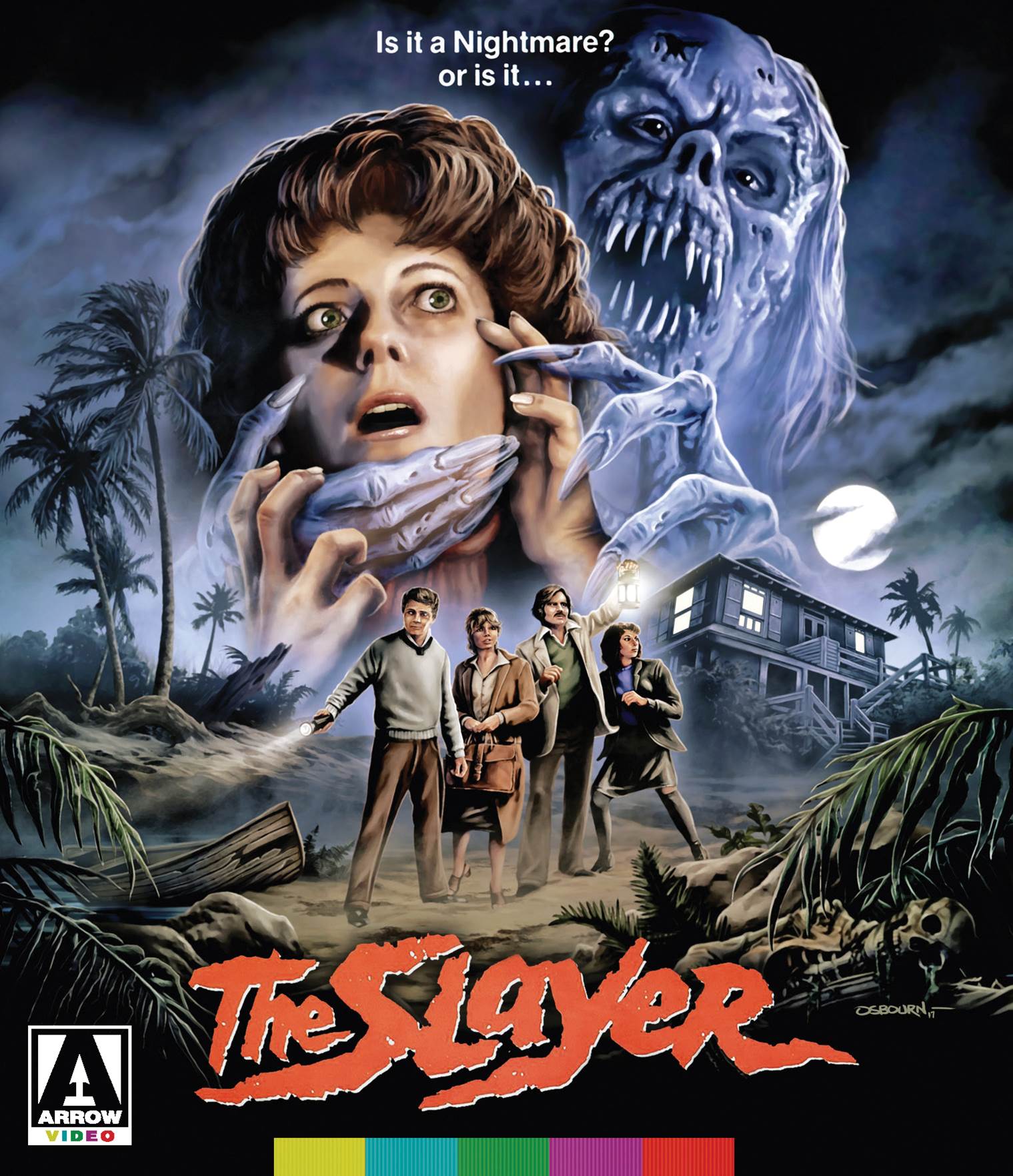 Kay is a depressed artist (aren’t they all?) and is forced to go on vacation with her boyfriend, brother and his wife. She doesn’t want to go, but she ends up saying yes anyway. After they arrive on the island, Kay starts having some vivid dreams of her friends dying, and when she wakes up the person is missing. Is Kay crazy or is there a killer on the loose? Watch the movie to kind of find out.

The Slayer is a longlost and forgotten slasher film from the ’80s that has been saved by Arrow Video. But should it have been saved? Hell yes! The Slayer is a fun, quirky slasher flick that provides the viewer with one story idea and then throws a different idea at you before saying screw it! Here’s another crazy twist!

The Slayer was produced in 1982, which was a few years before Wes Craven’s masterpiece A Nightmare on Elm Street. The reason I mention this is because The Slayer uses dreams as a plot device for the murders. It also has a scene where the main protagonist is trying to stay awake with coffee and cigarette burns to her hands. Of course, I’m not saying ANOES ripped off The Slayer, just that it’s an interesting piece of trivia.

The Slayer isn’t a masterpiece, that’s for sure. It’s got issues, but nothing that makes you cry into your blood pudding. I was disappointed that the body count was so low, but thankfully the murders that do happen are fantastic! One kill in particular actually provided the film with its cult status, so you know it’s going to be amazing.

I was also thrown off track a little bit with the way the story played out. Nothing is ever explained come the end of the flick, and I’m sure that final scene is really going to make a few people angry. I personally have an idea on what exactly went down in this movie, but I won’t spoil here; I would be interested to see if others have the same opinion. If you do, please join the conversation in the forum.

The Slayer was forgotten, but now it has been found, and I am really thankful to Arrow Video for giving everybody the chance to check out this wacky horror film.

There are only a few kills in this movie, but the ones we do get are pretty awesome-looking. One kill scene will be remembered long after the credits have finished rolling.

Besides a frosty glassed shower scene, there really isn’t much to be gawking at in The Slayer, which is odd seeing how it’s an ’80s slasher flick. Maybe that’s why it was lost for so long?

Arrow Video has restored The Slayer with a 4K scan of the original negative. The flick looks fantastic for the most part, with only a few bits of degradation and softness in the transfer. Overall, though, the film comes out looking phenomenal.

Audio is presented in Original Uncompressed Mono, and no issues were popping up when I watched the movie. I did have to crank the volume up a bit to hear some of the dialogue, but that’s more an issue of my viewing environment than the actual Blu-ray.

The Slayer’s biggest special feature is the 52-minute making-of which goes into great detail on the background of the film and the work that went into everything. There is some dedicated talk about that special murder scene and some discussion on the effects. The other significant feature is the Tybee Theatre screening, which is the filming location for The Slayer. You have an opening to watch and a post-Q&A to enjoy. The disc also provides plenty of audio features, such as two audio commentaries, an isolated score and the Tybee audience track.