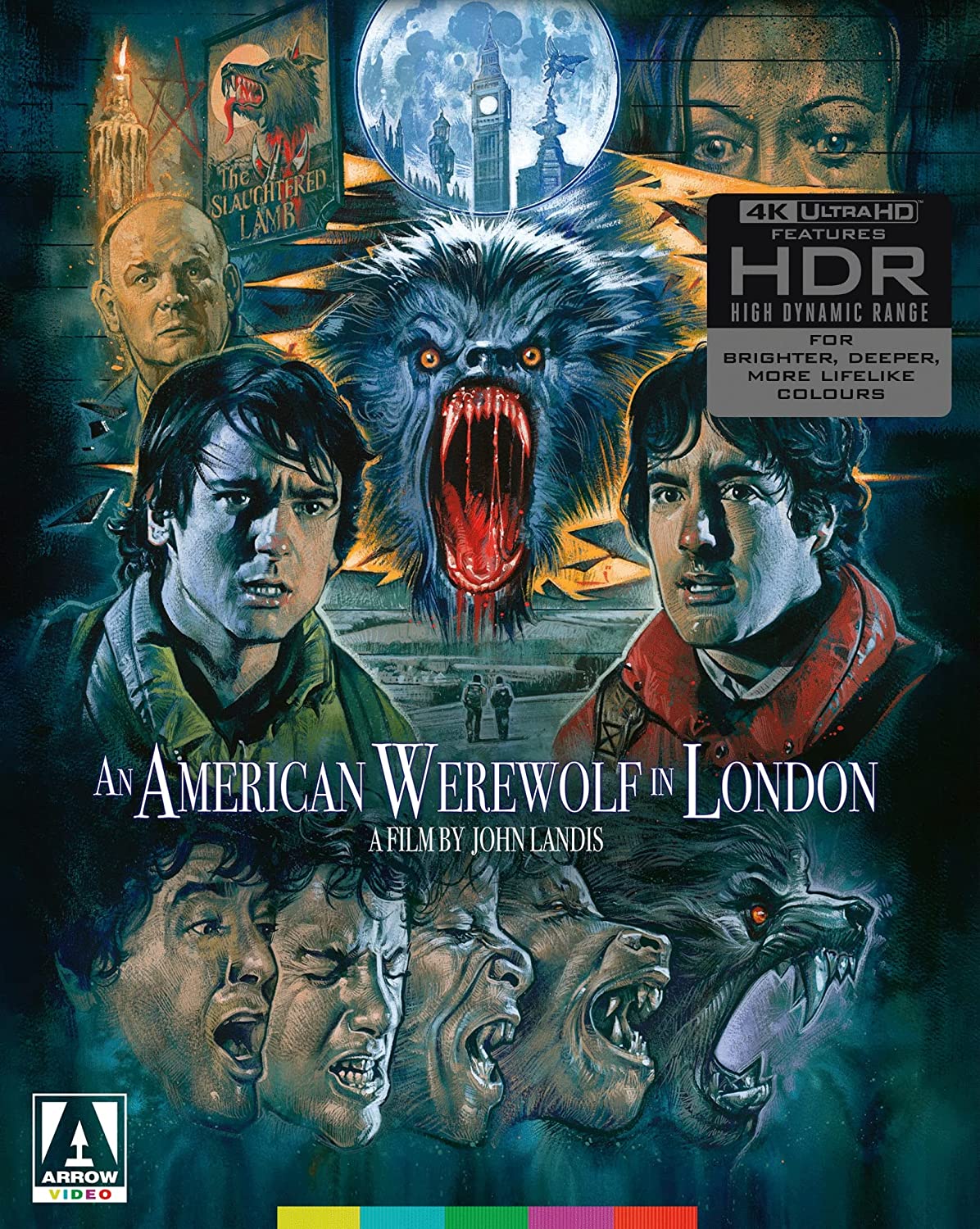 Back in 1981, two of the best contemporary werewolf films released virtually back-to-back. Joe Dante’s The Howling was first in March 1981, followed quickly by John Landis’ An American Werewolf in London in August. While both had their similarities, the differences are numerous as well; whereas The Howling is much more focused on cult-like elements and the relatively rural setting, Landis takes things to the city with an American transplant backpacking through Europe who has a haphazard encounter with a werewolf, then goes to stay in London to make the impending massacre that much worse. An American Werewolf in London helps define the modern werewolf elements we know and love, moving past the historical “man-turned-manwolf” storylines for a look at a truly terrifying transformational experience.

Listen to the Blood and Black Rum podcast episode on the film.

The film follows David (David Noughton), the aforementioned traveler who winds up in a London hospital under the care of Dr. Hirsch (John Woodvine) and nurse Alex (Jenny Agutter) after a wolf – or, as the town calls it, maniac – attack that leaves his friend (Griffin Dunne) dead and David in a coma for three weeks. Once he wakes up, he begins experiencing strange dreams involving running through the wild and eating deer, as well as waking hallucinations of his friend coming to him in various states of undeadness and advising him to kill himself before he fully turns into a werewolf. But hey, at least David finds his true love in Alex!

Prior to An American Werewolf in London, John Landis had successfully broken through with his raunchy frat romp Animal House, succeeded by an entirely different brand of comedy with The Blues Brothers. It must have been a surprise when he released what may be one of his bleakest films directly afterward; An American Werewolf in London expertly transitions from dry humor to horror in the same scene, aided by Noughton’s ability to tackle the everyman role with emotional catharsis. Ultimately the film is a fairly straightforward approach to the inevitable turning that most vampire and werewolf films follow: the protagonist is warned of their fate, given time to rectify it in which they fail to do, and find out firsthand the curse that has befallen them. Here, Landis expresses that in the form of a romance that blossoms rapidly, as though fate has handed David his true love in truncated fashion to allow him to finish out the arc of his life.

That romance drives An American Werewolf in London forward, because Agutter and Noughton have great chemistry and their passion overrides the rapidly oncoming dangers. But more aggressive than love is the painful transformation that Rick Baker’s practical effects display in excellent ways. Landis’ take on werewolves truly emphasizes the curse; here David is not just sprouting unsightly hair and nails, but completing a full body horror deformation that is agonizing. Bones pop, crunch, and shift, the face grows into a snout; hands and feet expand, pulling the skin and nails with them. It’s all managed by excellent editing to show the transformation in real time while cutting away at the opportune moment, showcasing various degrees of effects in progress instead of the usual dissolves associated with werewolf changes.

Finally we get to the film’s conclusion, in which David prepares for the end knowing he can’t massacre any more people. In the film’s abrupt ending, Landis shows the inevitable cliffhanger of David and Alex’s romance, having her there to experience the death firsthand. And then the film simply ends, a chilling display of the way fatal, unavoidable things can just happen with no warning. It’s easy to see a symbolic link to cancer in the werewolf – metastasis, a body in revolt, the uncontrollable changes that inevitably spiral – but An American Werewolf in London is simply about fatalism itself; it just ends.

Arrow Video has released An American Werewolf in London on 4K UHD as a follow-up to their previous limited edition Blu-ray box, which can either excite or enrage depending on whether you previously purchased the prior upgrade. This release does not include the Blu-ray either, meant as a standalone 4K UHD disc that Arrow has been doing of late.

The new 4K scan from the original camera negative looks gorgeous, sporting original aspect ratio of 1.85:1 as well as Dolby Vision-capable HDR. Fine details are strong while retaining a nice medium-bodied film grain, most evident in the busy background shots of Picadilly Circus and the subway signage showcasing various fast food advertisements. An American Werewolf in London is not always visually robust, but here the UHD highlights some of the strong cinematography. The verdant and foggy moors are displayed with strong color timing that uses the HDR to full effect; notably the reds, too, are extremely vibrant, specifically making note of David’s red vest during the film’s first scenes. Even the makeup detail on Jack’s face directly after his attack is strong without being too revealing. No real noticeable damage to report. Occasional stronger grain is apparent in outdoor sequences and sky shots, but nothing extremely obstructive. The film does not have a lot of very dark scenes, but the HDR black levels are used to full effect when they are employed. Overall, this 4K UHD is a very strong transfer for the film without detracting from the magic of its practical effects.

Audio is presented with both the original DTS-HD Master Audio 1.0 mono track as well as a reworked DTS-HD Master Audio 5.1 surround option. Purists will most likely want to use the mono as the most authentic way to watch the film, and it does sound strong with everything very centered. However, the 5.1 surround is also a solid contender here, since it sort of manages the best of both worlds – it keeps the dialogue very centered as in the 1.0 mono, but utilizes the satellite speakers for additional sound effects during particular sequences, sending growls, shattered glass, and other sound effects to the particular end of the balance. Either way, you won’t be disappointed. English subtitles are also included.

Extra features are all ported over from the previous Blu-ray release, which were numerous. There’s a feature-length documentary on the Universal werewolf films that interviews multiple people including Landis and Joe Dante; another feature-length, Beware the Moon, highlights An American Werewolf in London specifically. Also included are previously new interviews with John Landis, Corin Hardy and Simon Ward, a special effects tribute with Dan Martin, and more (see features list). Multiple archival interviews are collected, as well as outtakes, trailers, and extensive still galleries. Audio commentaries contributed by Paul Davis and David Noughton & Griffin Dunne provide additional incentive to watch the film again.

New to this release is a double-sided foldout poster as well as a collection of six double-sided lobby cards. A booklet with essays on the film by Craig Ian Mann, Simon Ward, and various archival reviews is also included. All of this is housed in a hardback box.

An American Werewolf in London is a must-have for any werewolf fan’s collection, and this release from Arrow Video is probably the most definitive to own thus far. While it’s not absolutely necessary to upgrade if you already own their Blu-ray limited edition release, the strong 4K UHD transfer and HDR element make this worthy of a double-dip, along with the additional physical paraphernalia. Definitely recommended. 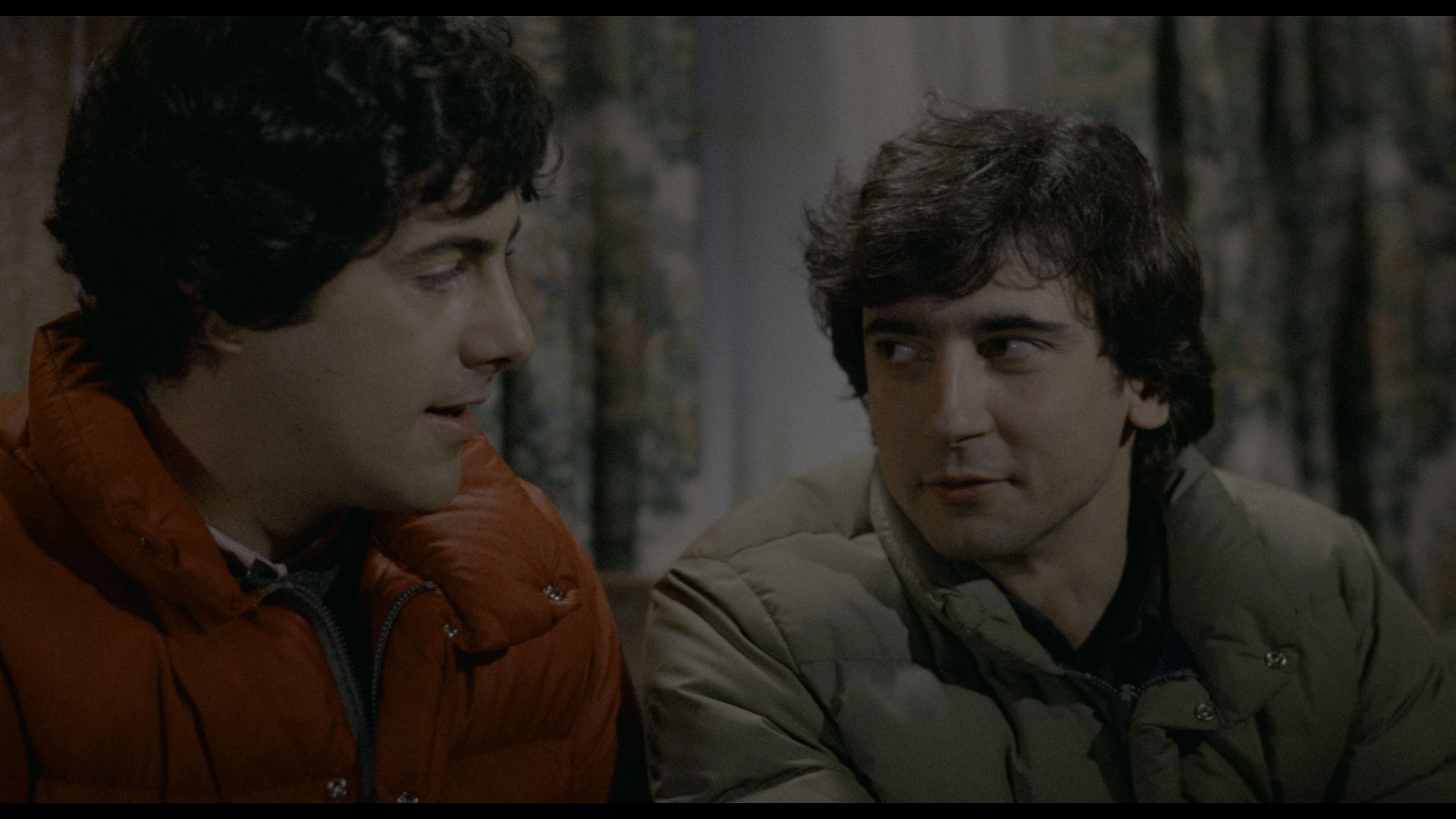 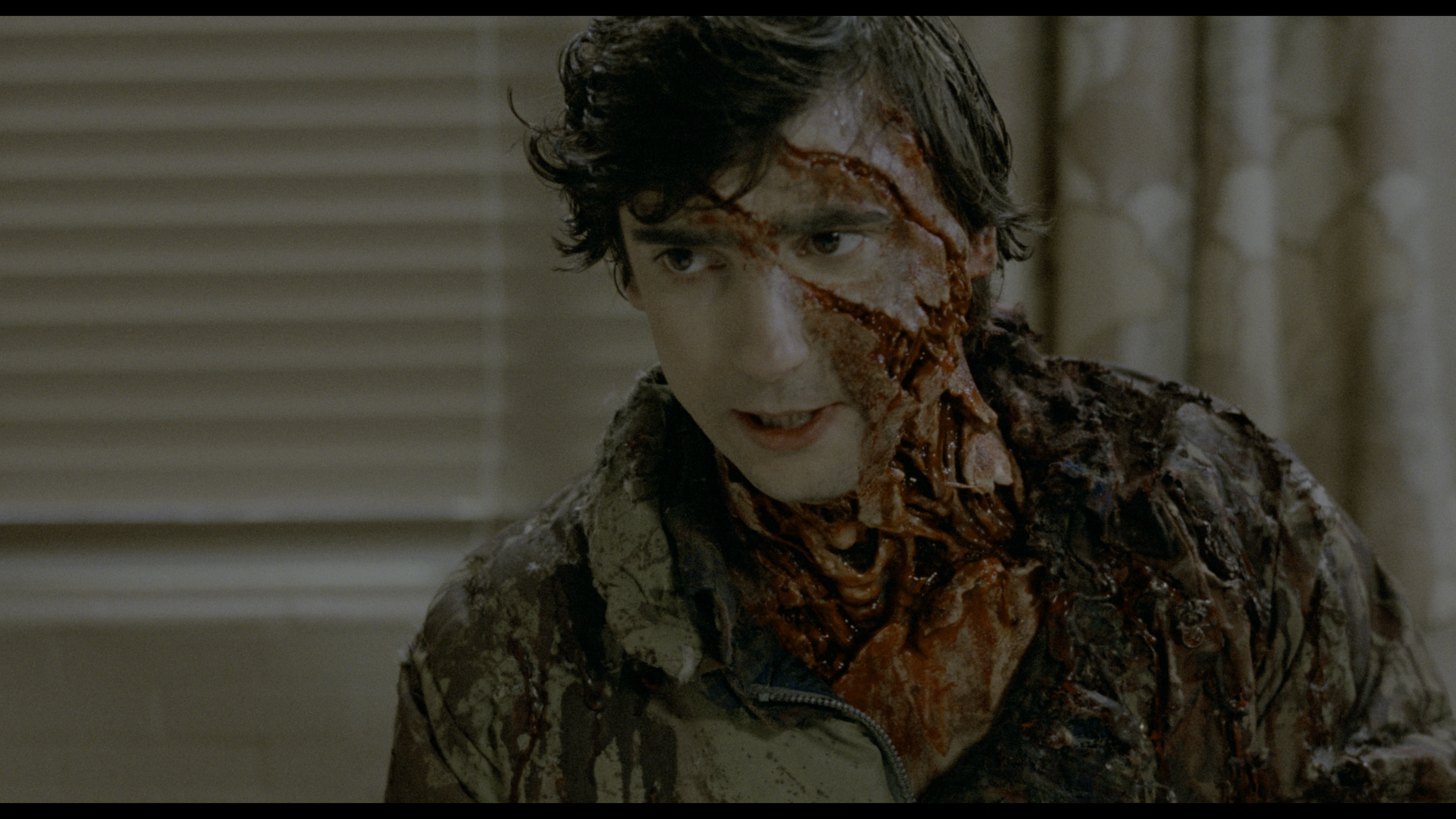 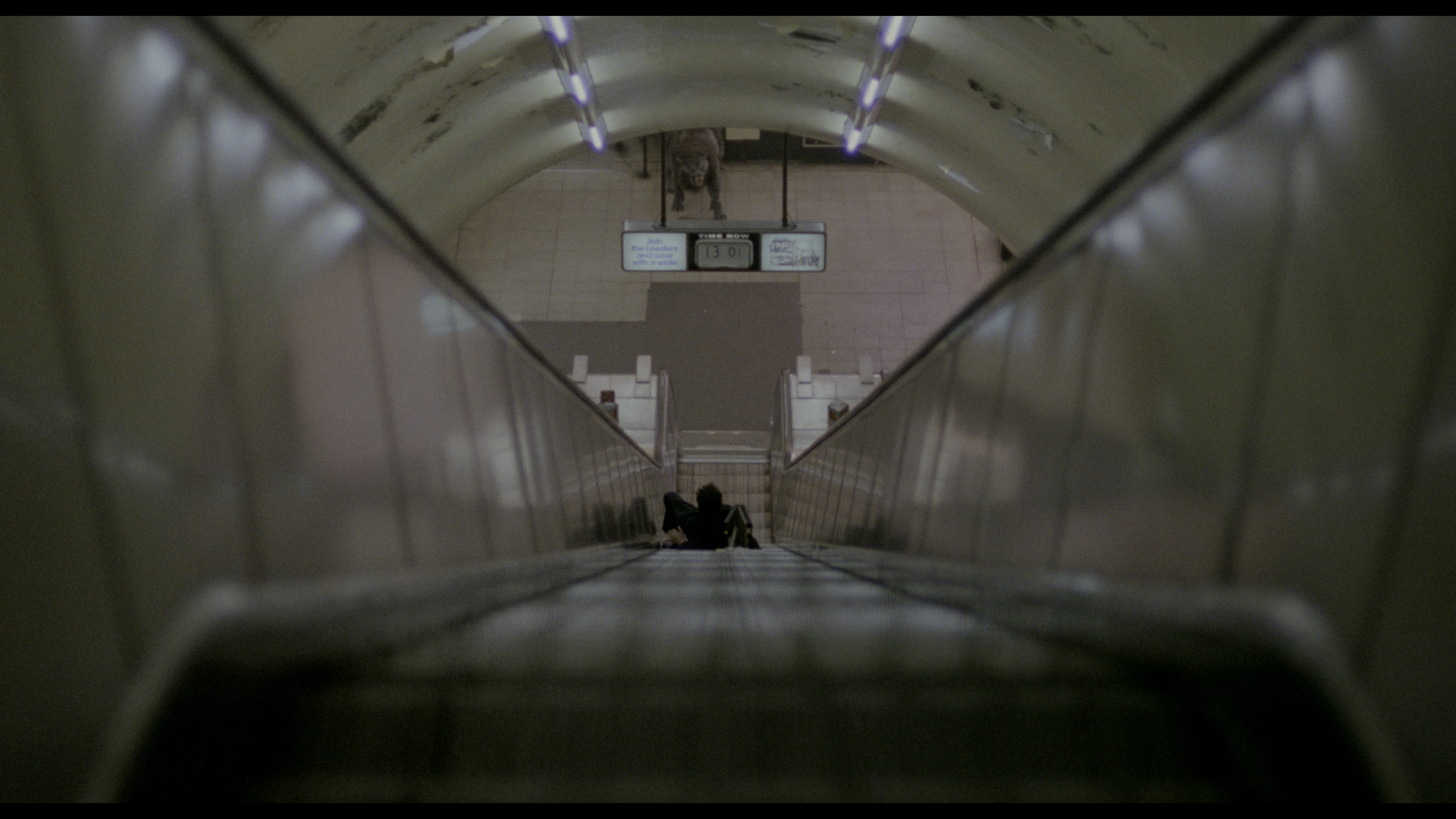 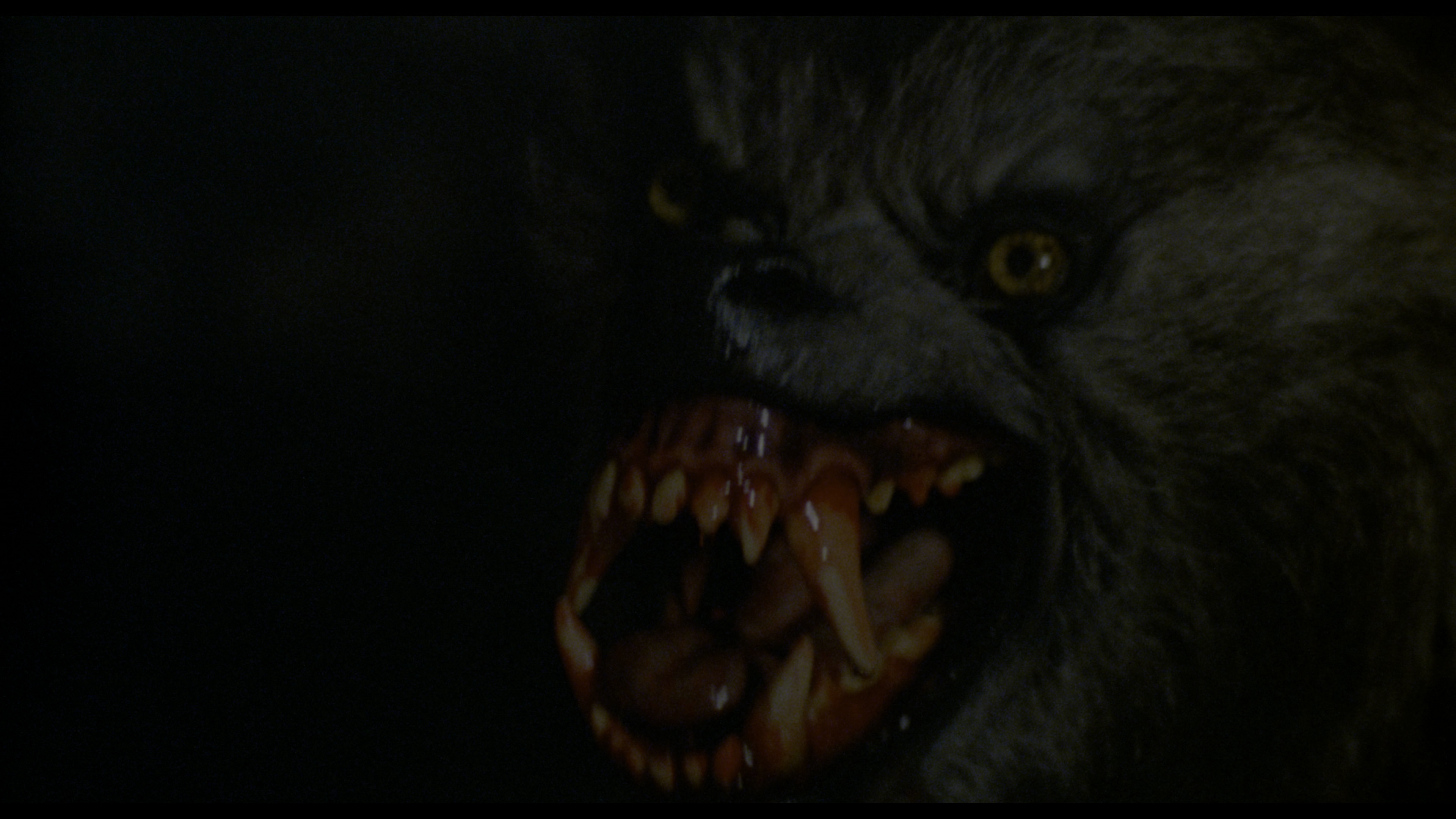 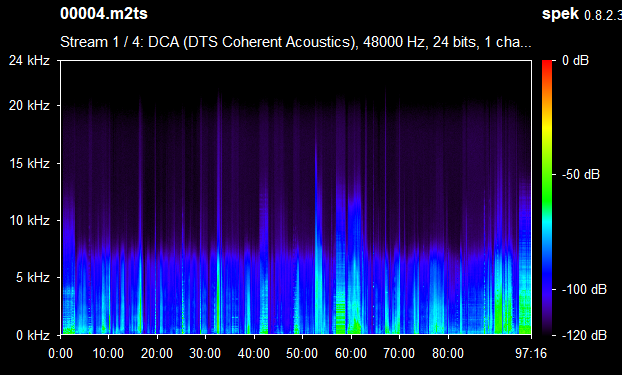 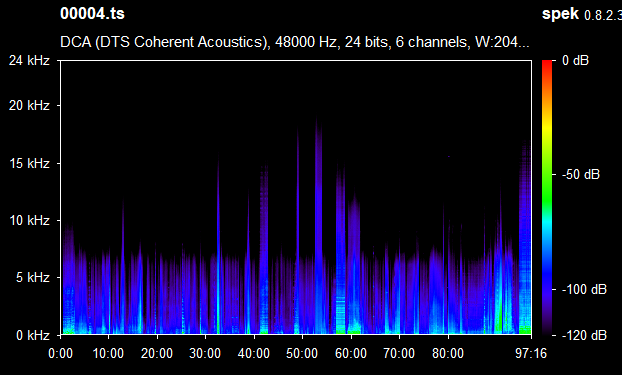 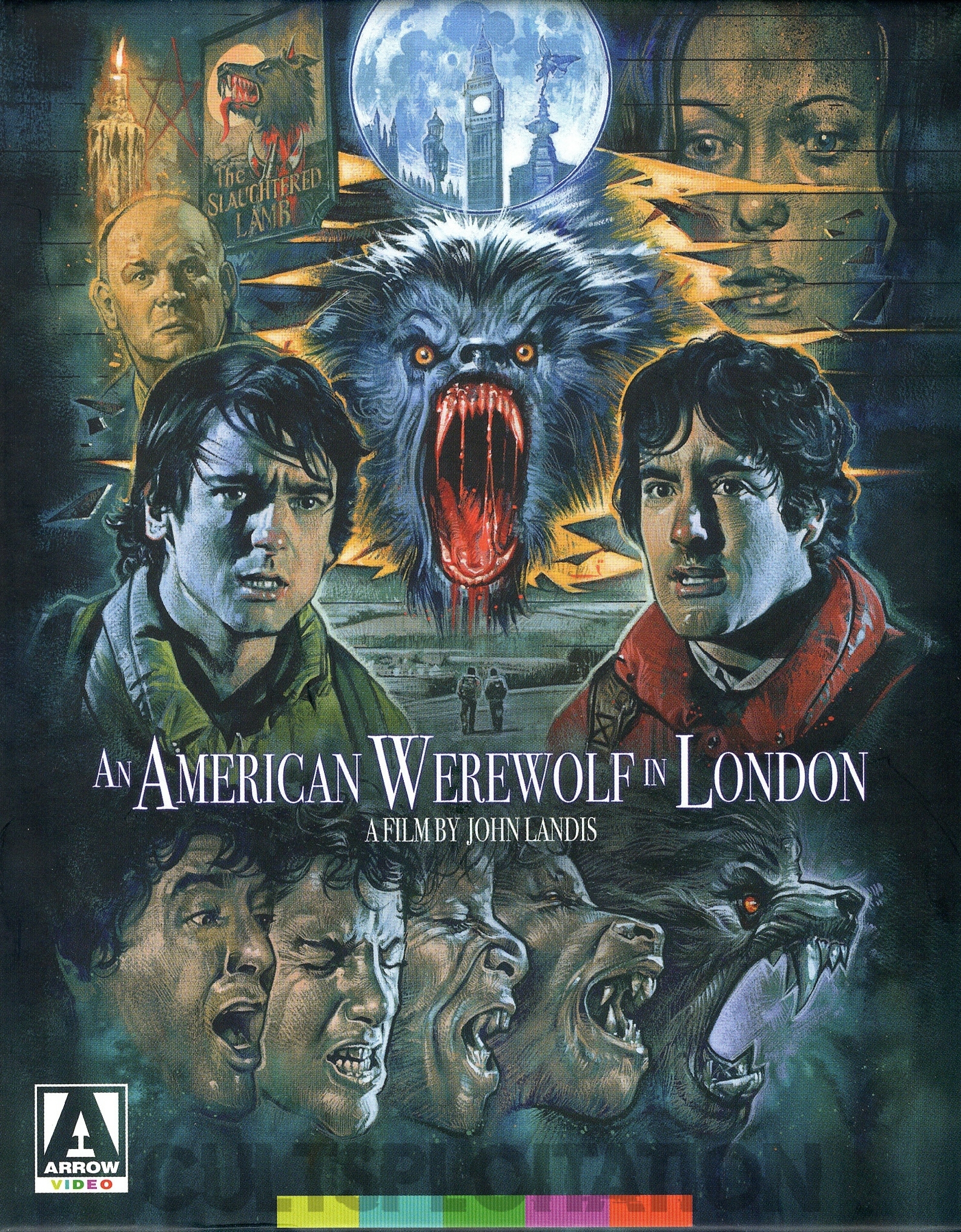 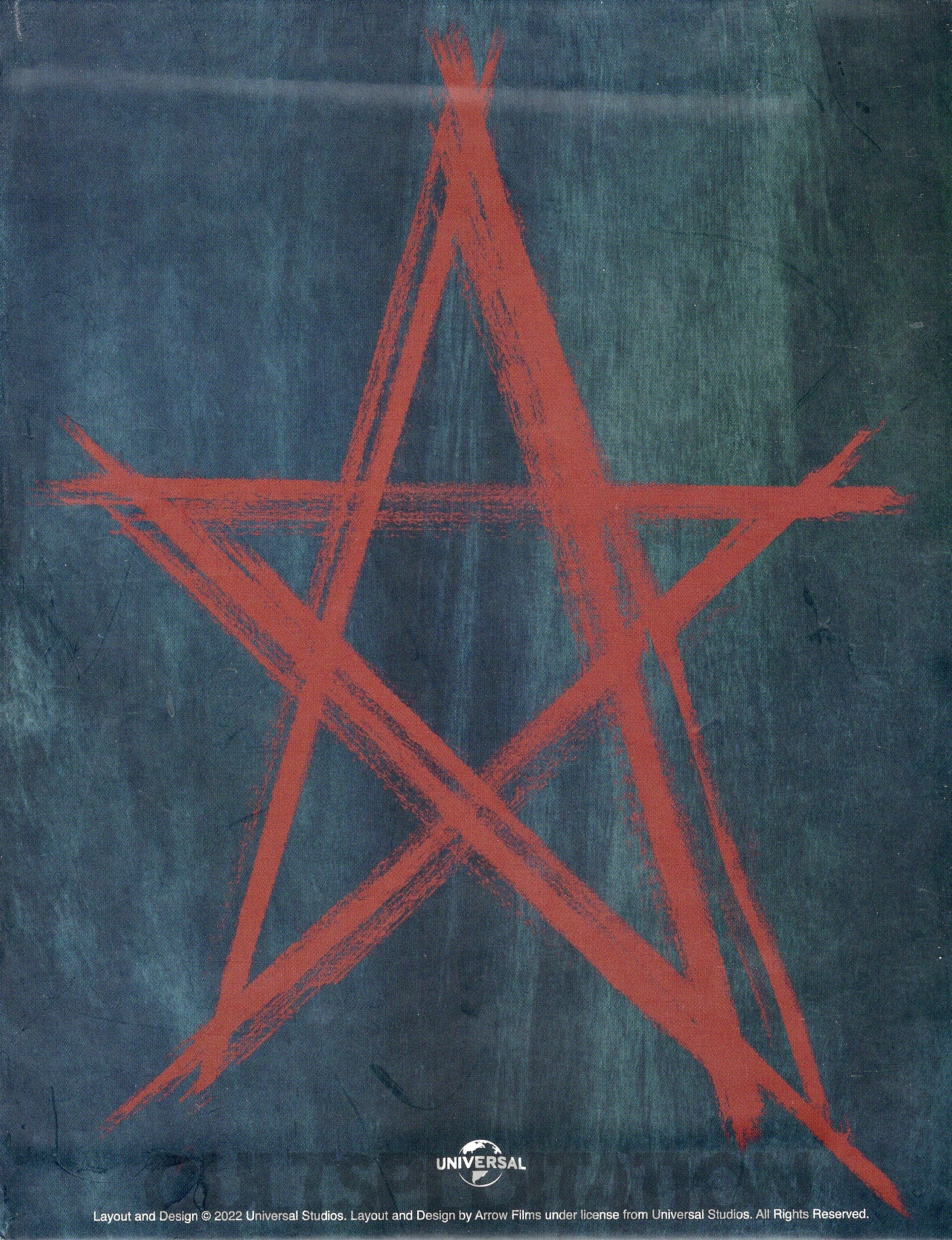 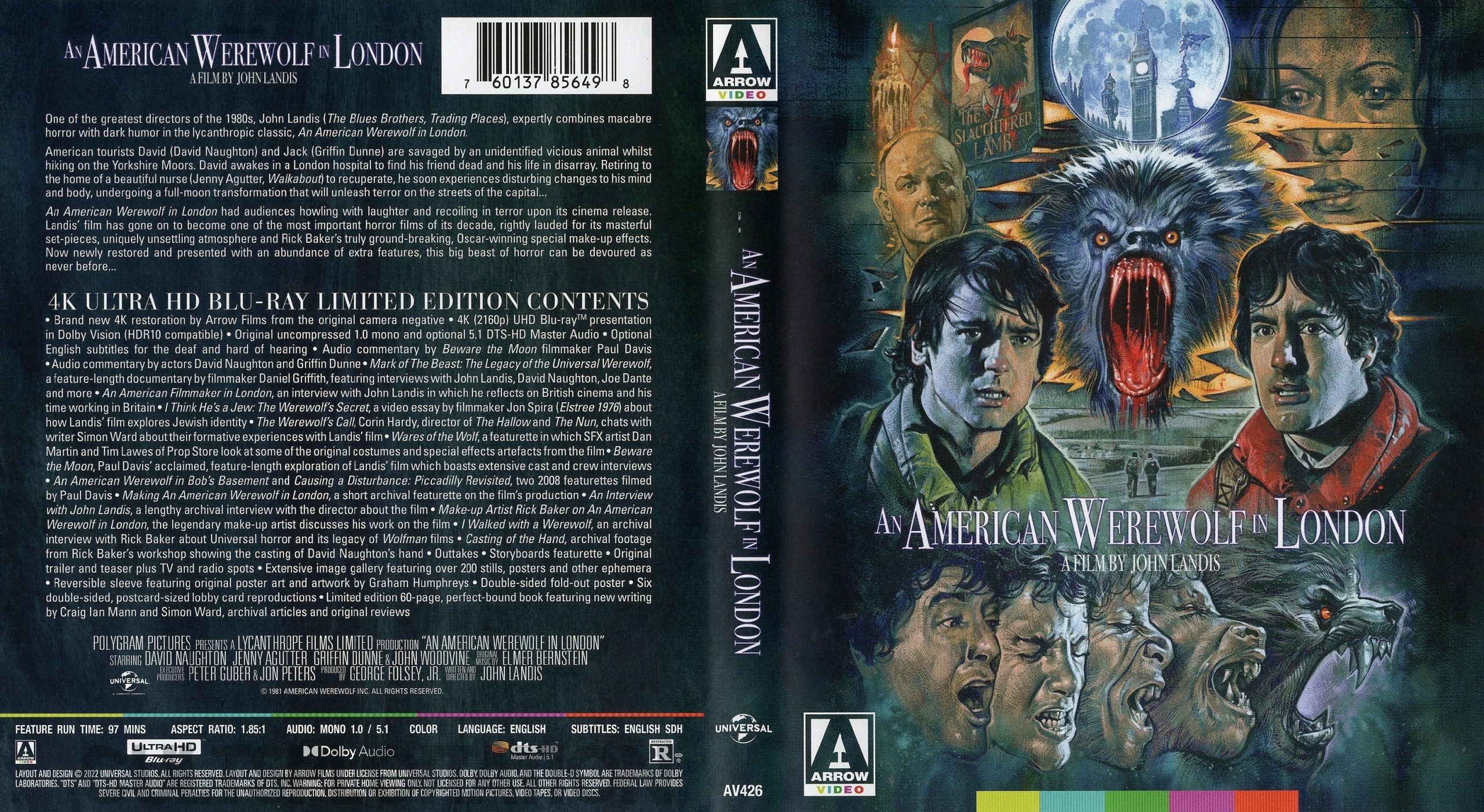 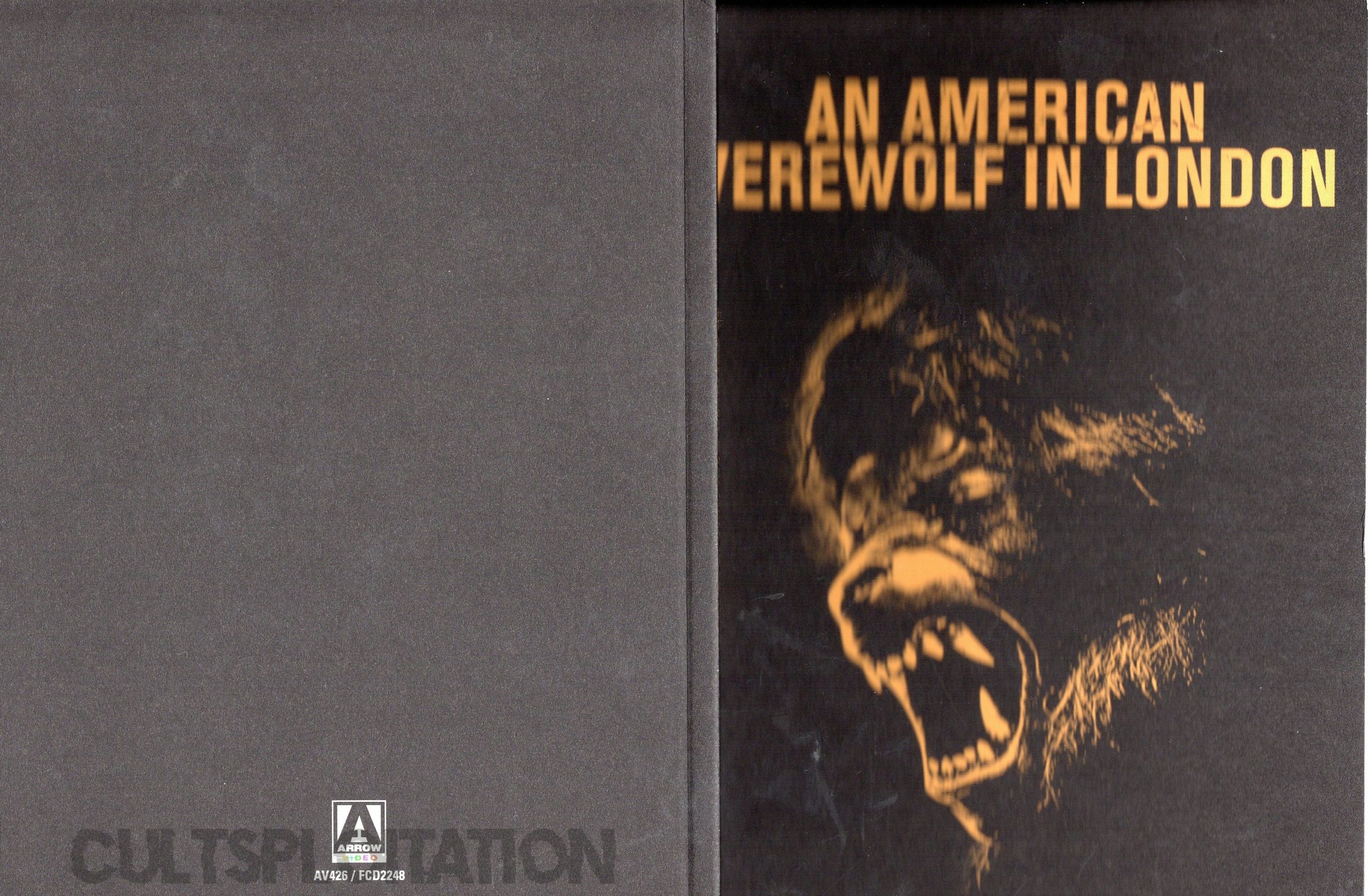 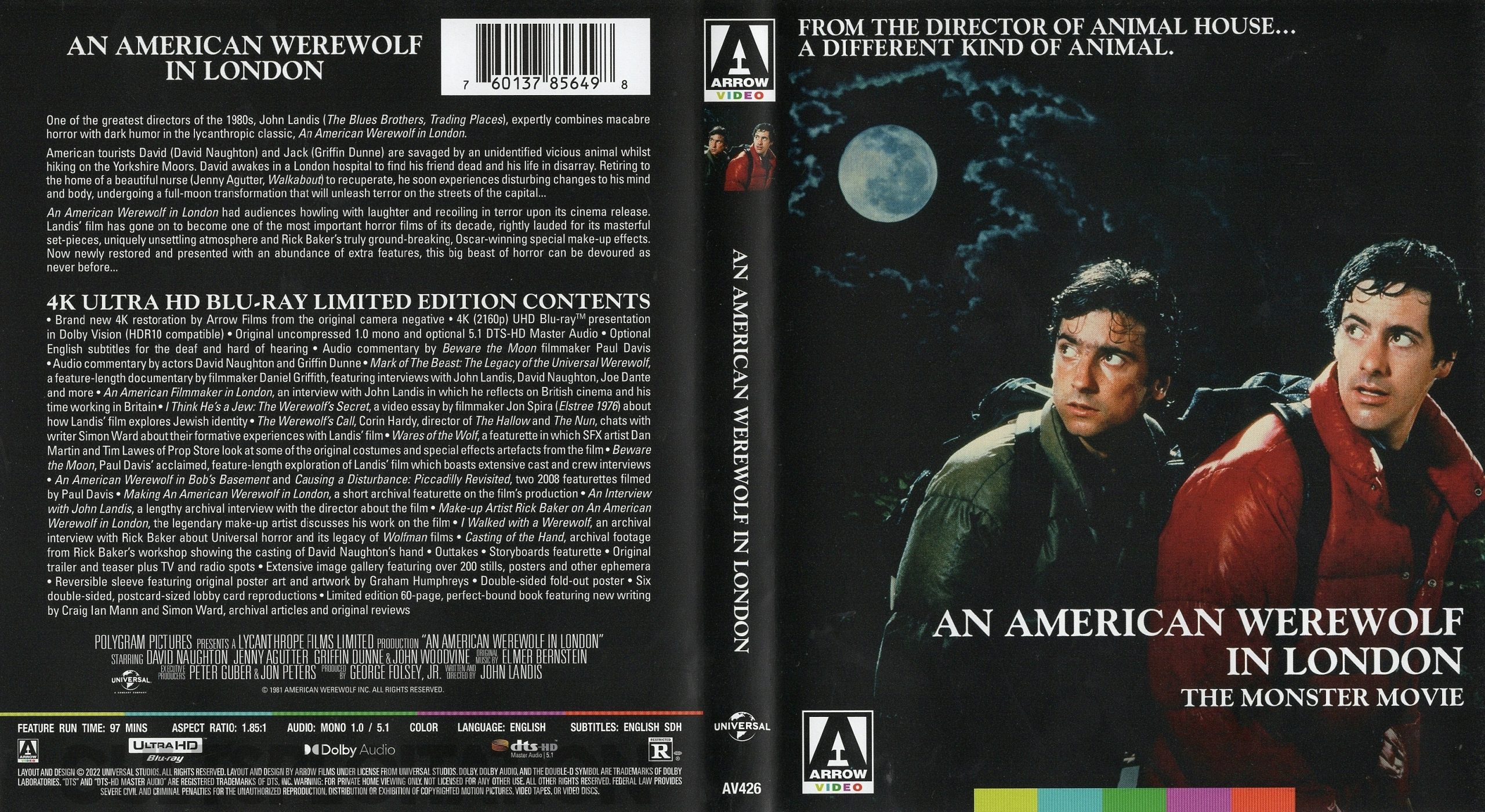 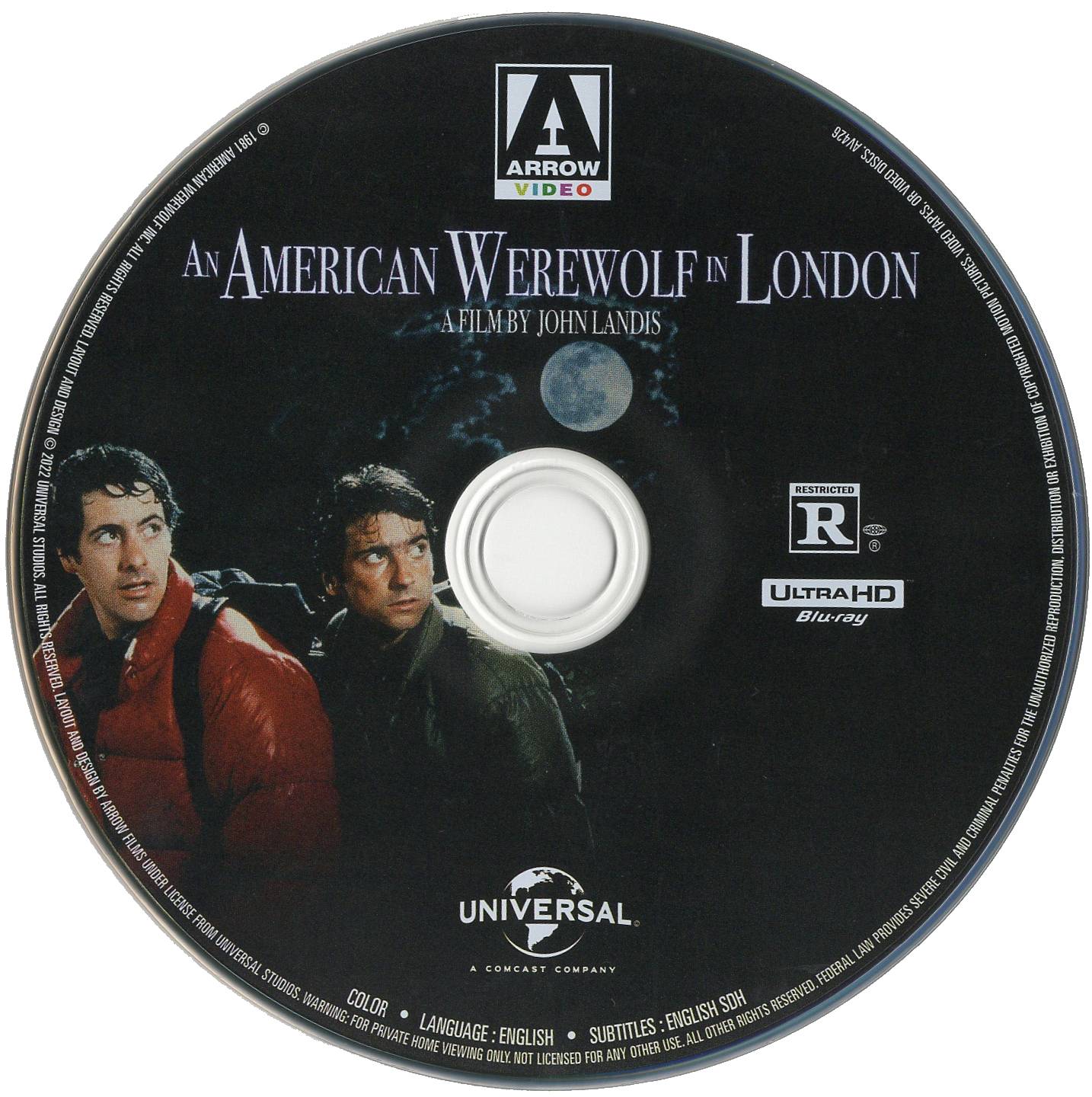