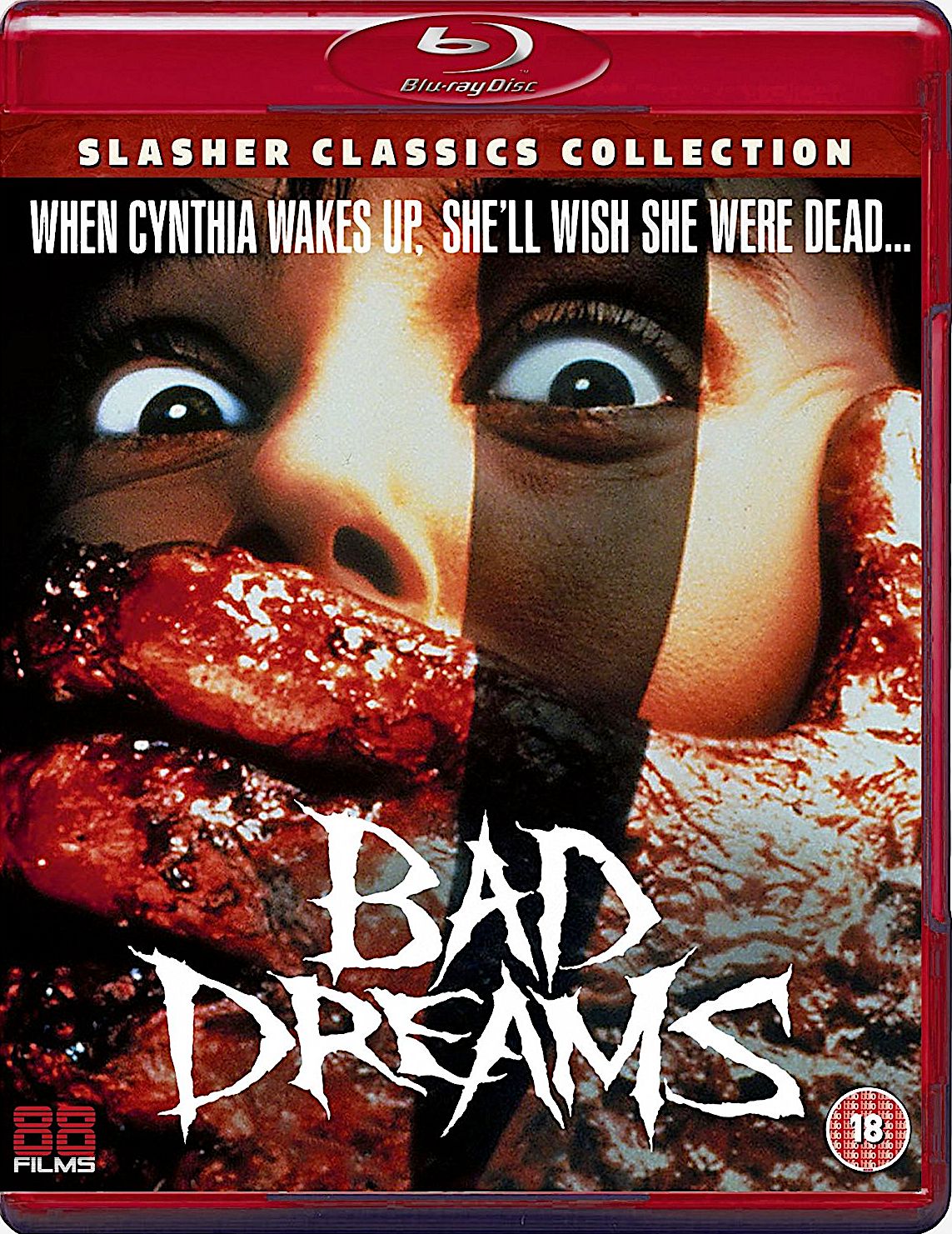 Bad Dreams is a successful slasher film despite its initial setup appearing to be a copy of A Nightmare on Elm Street Part 3: Dream Warriors. This 88 Films Blu-ray features a great transfer and some excellent extras.
Film
Blu-ray
Reader Rating1 Vote
4.3

Despite Bad Dreams‘ opening Manson cult meet-up, it becomes clear early on that Andrew Fleming’s 1988 slasher film cribs heavily from 1987’s hit A Nightmare on Elm Street Part 3: Dream Warriors. For one thing, Jennifer Rubin is a familiar face as the film’s star; more than that, though, is its asylum setting, its mentally afflicted characters, and its reoccurring burnt killer, appearing to kill off Rubin’s peers before disappearing into thin air again. But the elements that make up Bad Dreams are more complex than simply copying Craven’s Dream Warriors formula, and besides the obvious similarities Fleming crafts a unique slasher film that focuses on mental health, cults, and the damage that demented people can inflict on believing minds.

Rubin stars as Cynthia, a woman who falls into a lengthy coma after her cult commits mass suicide at the will of leader Harris (Richard Lynch). Fleming follows Cynthia after she wakes from her coma, committed to a psychiatric ward under the care of Dr. Karmen (Bruce Abbott). The setting gives Bad Dreams a lot of character fodder for its supernatural killer – all of the members in Cynthia’s therapy group are picked off one by one in unique ways, leading to a truly interesting encounter with Ralph, one of the film’s most mentally ill individuals.

While Lynch is basically playing a number of his other villainous characters in the film, the eerie presence of his burnt visage adds quite a bit to the atmosphere. But Rubin is also surprisingly effective as the affected young woman who has been conditioned into believing utopia can be achieved in the afterlife. Her brainwashing adds a layer to the film that helps to hide Bad Dreams‘ concluding twist – the biggest argument that though the film may have been derived from Dream Warriors‘ ideas, the ultimate endgoal is something much different.

Fleming’s movie is a fun trip, and though it could benefit from some faster pacing in its opening scenes, slasher fans will certainly enjoy this late offering in the genre that circumvents some of the traditional aspects.

88 Films has released Bad Dreams on Blu-ray as part of its Slasher Classics Collection, number 37 to be exact. This series includes red box art and slipcovers that standardize the collection. This also comes with a DVD of the film, along with a pullout booklet featuring a lengthy list of the best slasher films according to Calum Waddell.

Video quality looks gorgeous on this Blu-ray, including an HD scan of the film in 1.85:1 aspect ratio. There’s really no flaws to speak of for the picture – even damage and debris is at a minimum here. This is a great-looking release of Bad Dreams. Similarly the audio features no real issues either, with a nice 2.0 DTS-HD Master Audio track including English subtitles.

Extra features are fairly robust too, with a few new interviews with cast and crew. One of the most important is a discussion with Jennifer Rubin herself, lasting about 40 minutes! Director Andrew Fleming also provides an interview with some insight into the making of the film at a slightly trimmed running time. Finally, film historian Spencer Murphy attempts to reason that Bad Dreams is a much better film than most people credit it.

Ultimately this is a great release and one that anyone should pick up, whether you collect the Slasher Classics series or if you’re just looking to see if Bad Dreams is worth your time. As blind buys go, you won’t be disappointed.