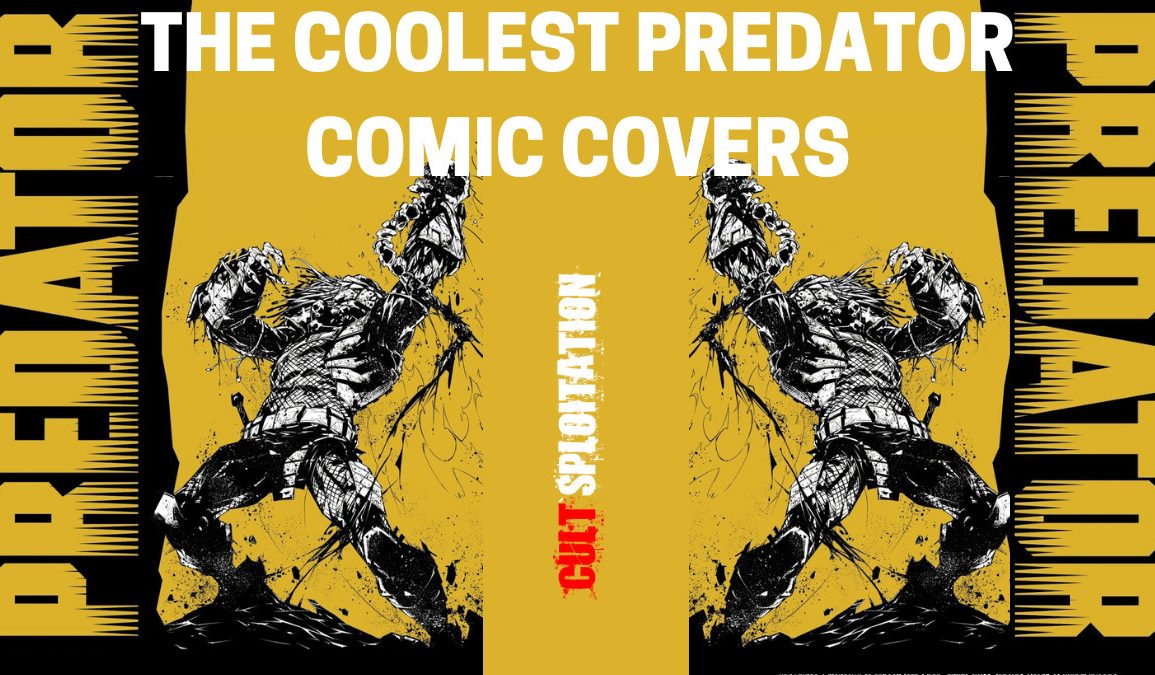 Shane Black’s new film The Predator hits movie theaters this weekend, September 14, and to celebrate we figured we’d forego the obvious ranking of the film series and instead focus on something a bit different: the myriad comic covers that the franchise has spawned over the years. Like Alien, the Predator mythos is vast, filled with book tie-ins and various storylines that extend the world of the Yautja. Below, let’s take a look at some of the best covers for Predator-inspired comics.

There have been three Batman vs. Predator volumes, amounting to eleven different issues in total; but one of the coolest covers comes from Batman vs. Predator II: Bloodmatch #2, released in 1994 by Dark Horse Comics featuring Paul Gulacy and Jackson Guice’s artwork. Probably the coolest part of this slick issue image? The way the Predator’s fist forms Batman’s mask in the cape – it’s definitely foretelling in a way many Batman villain covers suggest the Caped Crusader’s demise.

We certainly can’t discuss all of the Predator comics without focusing on the first issue of them all: Dark Horse’s Predator #1, released in 1989 not long after the film’s debut. Chris Warner’s cover artwork immediately shows the new setting for this series, putting a victorious-looking Predator in front of the New York City skyscape. Ominous for the human race to be sure.

Here’s a pretty violent cover from Predator: Kindred #2 done by Igor Kordey. The 1997 series follows the exploits of a small Oregon town plagued by the appearance of a Predator, wherein they create a small militia a la Silver Bullet to hunt down the Yautja.

This four issue series about the fight between Aliens and Predators started things off on the right foot with a cover by Glenn Fabry, who immediately seems to set the Predator up as the larger aggressor in this story – the gruesome Predator visage takes up the large part of the background while the Xenomorph appears to be somewhat imprisoned and less of a threat.

Predator vs. Judge Dredd vs. Aliens #3

One of the cool things about Predator vs. Judge Dredd vs. Aliens is not just the fact that all three of these iconic characters are fighting against one another but that the three issues take one of the characters’ faces and put the other characters inside it. Take, for example, the above cover from issue #3 – Judge Dredd and a Xenomorph are trapped in the Yautja’s forehead. Very cool, and a theme that runs throughout this limited four-issue series.

The Archie Comics line-up has certainly gotten weirder over the years – there was that whole Sharknado mash-up – but one thing that I do appreciate is the ridiculous hijinks they’re up to. This variant cover of Archie vs. Predator #4 by Joe Quinones is probably my favorite simply because the Predator looks so fed up with this shit. That, and it sort of looks like Betty’s been jizzed on.

This mash-up comic of Witchblade, The Darkness, Aliens, and Predator is pretty insane in its own right because of all the franchises represented and the collaboration between Top Cow and Dark Horse, but it also ensured that the 3-issue series got some pretty awesome covers. On the third and final issue cover we see a nearly naked Witchblade being trampled by all the other entities – it’s colorful, risque, and quite cool.

One thing that I find pretty interesting about this cover artwork on Superman vs. Predator #2 is the reversal of one of Superman’s superpowers. Here the Predator is using his own laser sight, something that Superman could use if he was aware of the threat behind him. It’s a great juxtaposition to put Superman at a disadvantage.

This one is less about Predator looking cool and more about his “oh shit!” face that he’s wearing as he’s about to get pummeled by a giant bear. It’s silly in the best way, as Predator: Primal was throughout its two-issue arc.

Aliens/Predator: Deadliest of the Species #2

The thing I like most about this cover is the way Predator is depicted as sort of an ancient civilization carving – it’s a cool way to pay tribute to the lengthy existence of the Yautja.

Did we miss any cool Predator covers that you love? Let us know in the comments!