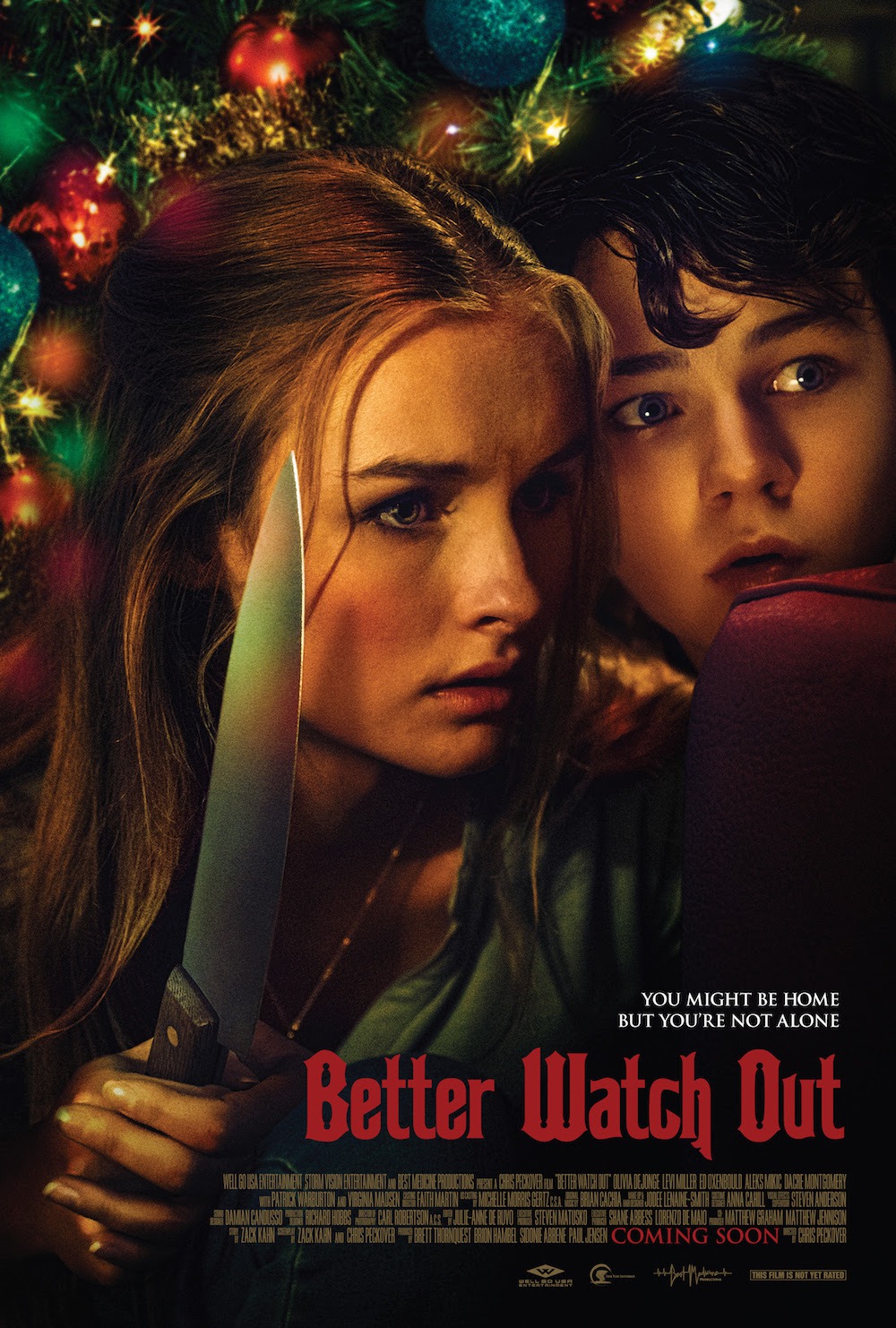 Luke’s nearly thirteen years old, but his mother still treats him like a child. He’s got a babysitter named Ashley who comes over to take care of him, but that’s okay – he has a major crush on her, and when his parents go out to a Christmas party, he decides to take this opportunity to show her how much he cares. It all comes crashing down, though, when a home invasion begins, starting a chain reaction of twists that put Ashley in danger rather than into Luke’s loving arms.

Chris Peckover’s Better Watch Out is, on the surface, very similar to home invasion films of old, including Netflix’s The Babysitter which got a home release right around the same time. However, there’s an unfortunate comparison going around right now, as though it’s a choice to like either The Babysitter or Better Watch Out because two films can’t fit the same niche for a viewer’s pleasure; at Cultsploitation, we’re here to tell you that it doesn’t have to be this way. You can like both of these films – they don’t even sit in the same tonal area.

The script, by Peckover and Zack Kahn, is a quirky blend of comedy and more sinister darkness, which leads to some very tense sequences. In some ways, Better Watch Out finds black humor in its setup: it first follows Luke as he tries to scare Ashley into his brave arms by setting up a home invasion, carried out by his goofy stoner friend Garrett (Ed Oxenbould); when that fails, Luke morphs into full-blown domestic abuser, playing mind games with Ashley and Garrett as he carries out a scheme that he has obviously concocted over the course of years, following Ashley’s boyfriends and picking apart the parts of her life of which he doesn’t approve.

There’s something funny about seeing little Luke trying to mack on Ashley, and it’s even kind of comical when he sets up an elaborate horror movie plot to scare her. But things get much more tense once Luke’s sociopathic tendencies are put on display. Miller does a great job with this transformation, able to sell both the pathetic pre-teen lust and the more dynamic elements of someone who has clearly become emotionally unhinged. The script itself also does a good job of keeping its central theme hidden until it eventually rears its ugly head; from there, it’s a suspenseful hour of psychological manipulation, violent Home Alone-inspired games, and some often mean-spirited kills.

That all translates into an effective horror film, though, one that certainly captures a different side of the Christmas holiday. Kahn and Peckover wear their inspirations on their sleeve; there are direct references to Home Alone, and there’s a final ending shot that is reminiscent of Black Christmas. Peckover does a great job of getting those warm festive lights into frames to give Better Watch Out an ironic tone, and a Christmas caroling scene helps to show how Luke can snap into normalcy in the space of seconds.

And while the film can sometimes seem like one disturbing set piece after another with little commentary about its main antagonist, small hints allude to the basis of his personality. For starters, his mother has an unhealthy obsession with protecting him, keeping him inside his room at night with a pencil on his door to make sure he hasn’t left the room and drugging him with a sedative. There’s also Luke’s need for affection, its origins stemming from his overbearing mother who used to cradle him in her arms until one day she didn’t anymore. Better Watch Out isn’t overly concerned with Luke’s psychological diagnoses, but the underlying facts about them can be gleaned from some of the character interactions. Even Madsen’s references to Warburton’s character being gay because of his tie collection show a systemically toxic understanding of sexuality in the family.

Better Watch Out truly is a treat for Christmas – it’s stressful, twisty, and chaotic, with an intriguing premise that combines favored holiday films into a disturbing home invasion movie. The character work here is a highlight, which is even more surprising considering the young actors taking on these roles. And if you love films like Home Alone, Black Christmas, and Funny Games, you’ll find Better Watch Out wraps all of those inspirations into a great gift.

There’s not a lot of overt violence on display here; it’s more the idea of it that causes some tension. A paint-and-blood combo sloshing around on the floor leads to a cringe for sure. However, Better Watch Out is smartly not explicit.

None, for good reason – these are underage kids we’re talking about.