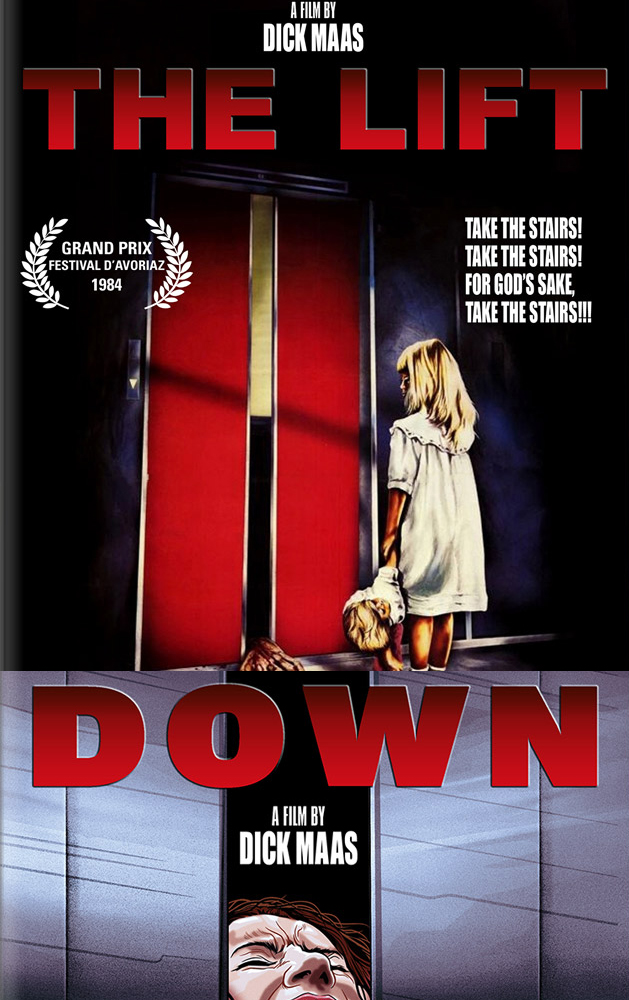 The Lift / Down (aka The Shaft) Blu-ray Review (Blue Underground)

The Lift: An elevator comes to life and starts terrorizing anyone that dares step inside. It’s up to Felix the handyman to figure out what is going on, but hopefully, his wife doesn’t get jealous seeing him hanging out with the hot reporter helping him save the day.

Down: An elevator comes to life and starts terrorizing anyone that dares step inside. It’s up to Mark the handyman to figure out what is going on, but hopefully, his cheating girlfriend doesn’t want to get back together with him as he is busy hanging out with the hot reporter who is helping him save the day. We better call the President, an elevator is malfunctioning. Could be terrorists.

The pictures do not reflect the quality of the Blu-ray releases.

I’m going to try something a bit different this time around. I usually do one review per movie, but in the case of Blue Underground’s Blu-ray releases of Dick Maas’ Dutch horror flick The Lift and his 2001 remake Down (also known as The Shaft, a fitting title) I’m going to do one review for both.

The Lift was released in 1983 on a budget of roughly €350,000 and was directed by Amsterdamned director Dick Maas. It features actor Huub Stapel, also in Amsterdamned, playing an elevator mechanic named Felix, who is called in to investigate the strange behaviour of an elevator in a local office building. The elevator has been running itself, opening and closing doors and eventually people start dying due to the elevator playing some deadly shenanigans. Is the lift haunted or is something else at play?

The Lift tries hard to base its story grounded in reality, even with the premise of an elevator becoming sentient and killing would-be riders. The flick isn’t overly gory, but there are a few memorable deaths that should leave horror fans grinning.

The film isn’t perfect, though, as it struggles with pacing issues, dragging the film down and making a 99-minute runtime seem longer than it is. Also, the conclusion doesn’t conclude anything to be perfectly honest. The elevator may or may not be defeated, and Felix may or may not be getting a divorce and hooking up with the hot reporter who has been helping him investigate the killer lift.

Even with the pacing issues, I still really enjoyed The Lift‘s premise and execution enough to give it a recommend. The same can’t be said for its remake.

The plot is the same as the original, albeit with some added nonsense to justify the budget costs. I ask you, why would the President and the FBI get involved in a few elevator killings? Although creepy enough, the film mentions terrorists, the Twin Towers and Bin Laden. Did I mention the movie was released on September 6th, 2001? Ouch.

There really isn’t much to like in Down. They try to put some more gore in, but the laughable CGI ruins that. The scene with the extreme rollerbladers comes out of left field and just makes for yet another random piece of nonsense to be piled on top of this shit sandwich. No amount of Perlman’s moustache, Ironside’s mesmerising voice and Watts’ looks can save this turd.

A decapitation is a highlight, even if the practical effects are iffy. Not much else is seen.

The decapitation in this disaster is ruined by CGI, as is pretty much all the other kills. One scene only, involving a body being torn in half, is spared the CGI, and it comes out on top as the best kill scene.

The Lift gives us some nice boobs during a hot elevator lovemaking session. That’s about it, though.

Down gives flesh seekers the shaft and provides us with nothing.

The Lift has been lovingly restored, and film enthusiasts will be very pleased with this release. I didn’t notice any compression issues or dirt or debris that would obstruct the watching experience.

Down also is restored nicely, with only a few instances of scratches showing up on screen. Nothing major, though. Thankfully, the film is finally presented in the proper aspect ratio. No more full frame crap.

The Lift Blu-ray features Dutch: 5.1 DTS-HD; Dutch and English: 2.0 DTS-HD, with English, English SDH, and Spanish subtitles. Both are clear with no apparent issues present.

The Lift release has been provided with an audio commentary with Writer/Director Dick Maas and Editor Hans van Dongen, a short interview with star Huub Stapel, a short film by Dick Maas that provides a lovely little yarn, some trailers and a photo gallery. I was actually quite surprised at the lack of features with this one.

Down has an audio commentary with Writer/Director Dick Maas and Stunt Coordinator Willem de Beukelaer, an older featurette and a whopping 154 min Behind the Scenes feature. Who in their right mind would watch all 154 minutes? Nevertheless, thanks for providing it, I guess? Rounding it out are trailers and still galleries.