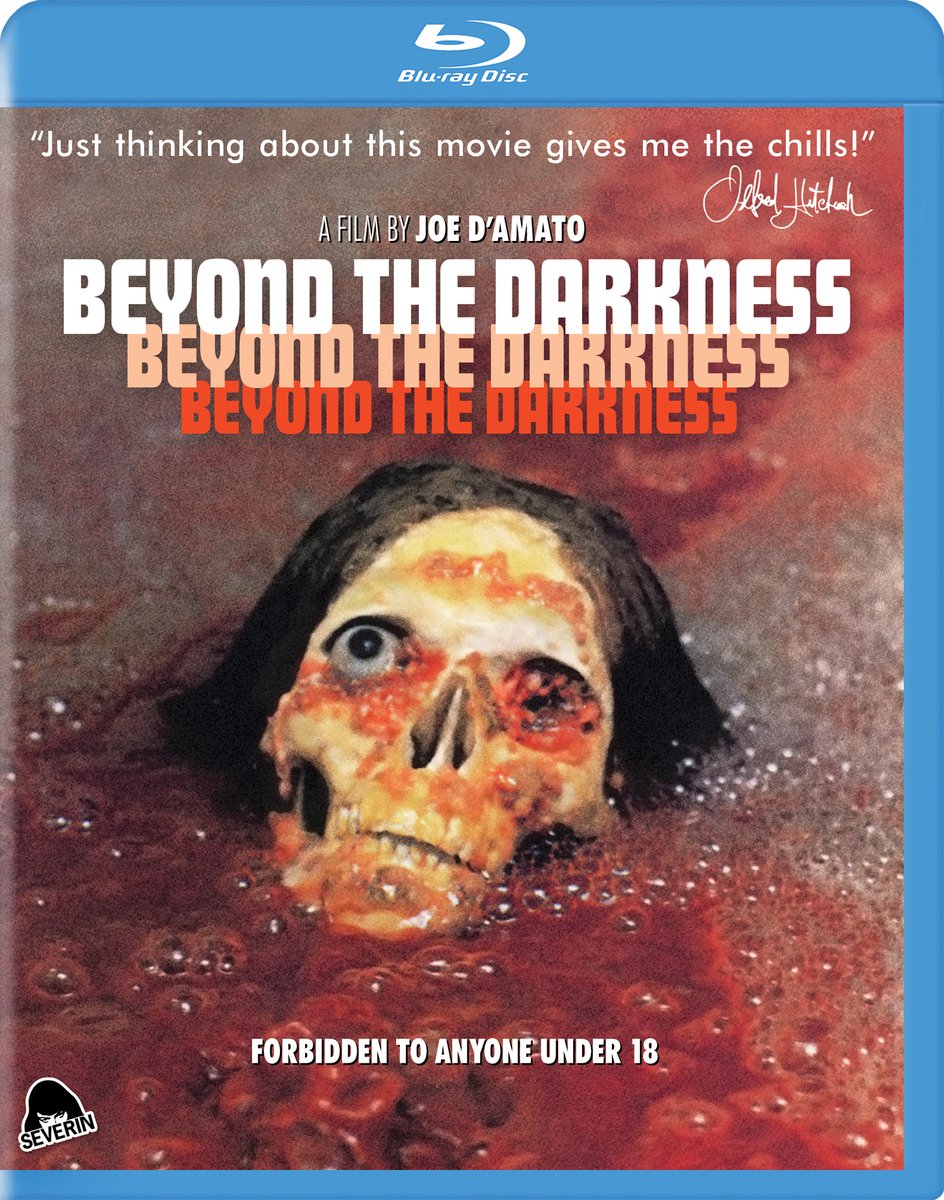 Beyond the Darkness Blu-ray Review (Severin Films)
Beyond the Darkness may be somewhat vile, but its plot is lacking, leaving a mediocre gore film. Severin Films does a great job with the extras on this Blu-Ray to make it worth a purchase, even considering the previous 88 Films release.
Film
Blu-ray
Reader Rating0 Votes
3.8

Frank is an experimenting taxidermist who decides to try something a bit more difficult when his fiancee dies; overwhelmed with grief, he steals her body from the cemetery, embalms it, and keeps it in his bedroom while his live-in caretaker covers for his secret. But it seems Frank’s bloodlust can’t be sated: he’s not only attracted to his dead wife and the older motherly figure Iris, he also lures other young women back to his house so that he can mutilate and dismember them. Suffice to say that Frank’s a strange guy.

Beyond the Darkness, or Buio Omega or Blue Holocaust, seems to be well-known as a Joe D’Amato film with a nasty side. The Severin Blu-Ray release cover depicts just how vile it can be, with quotes and phrases showcasing its violence and depravity. But one thing that viewers won’t find is a blurb praising the film’s plotting, because try as D’Amato might to make a creepy feature about a Norman Bates-esque character murdering people in his villa, there’s very little in Beyond the Darkness that resonates as a well-structured story.

It’s mostly due to Ottavio Fabri’s poor script, which often features little dialogue throughout lengthy portions of the film. With no solid reasoning behind Frank’s (Canter) decision to exhume Anna’s (Monreale) corpse, and very little explanation for Frank and Iris’ (Stoppi) odd and cannabilistic behavior later in the film, Beyond the Darkness ultimately becomes a tour de force of gore effects, mutilation, and dead naked women as Frank and Iris chop up random passersby and burn them in their cremator.

While that’s not a particularly bad scenario on paper, D’Amato never takes the film to interesting places, and too often Beyond the Darkness repeats its scenes over and over again without ever developing characterization for the people the audience is supposed to follow. Frank, for example, is difficult to understand from the viewer’s perspective. Is he meant to be a tragic antihero? Does he actually like killing, or is he manipulated into doing it by Iris? Without any context, the film fails to deliver a meaningful theme – it’s potentially about kinky love, but its point gets lost in D’Amato’s viscera.

With that said, some of the gore effects are quite good and there is ample nudity (see below). There’s even a potential giallo connection. However, most viewers will want more from Beyond the Darkness than a tenuously-connected plot and lots of bloody props.

The one thing that Beyond the Darkness really does right is its gore, with an autopsy scene that goes above and beyond most. While some of the film’s later gags – eye gouges, butcher scenes with improperly-timed blood spatter – don’t work as well, the film’s first autopsy is a well-shot marvel of filmmaking, and the movie is certainly worth a watch for this specifically.

While there’s a lot of nudity throughout the film, most of it is not done in a titillating sense; in fact, the most skin is shown by Monreale as she lies dead on a slab. However, various female actors give full-frontal; there’s a boob-sucking scene involving Iris and Frank; and there’s even a very quick penis shot from Canter, although you’ll miss it if you blink.

Severin Films has released Beyond the Darkness on Blu-Ray with a new HD restoration. They’ve done a fairly good job with this transfer, although from the first moments of the film it’s clear that the source was not in the best shape. There’s a heavy grain overlay to the whole film that can sometimes hinder the clarity of the image, often more evident in outdoor scenes. There’s also a number of noticeable damage spots throughout the film, although none of them are so distinct as to ruin picture quality. Color contrast and lighting are both well-done, however, and besides the obviously damaged source, this Beyond the Darkness release will appease fans who want to own the film on Blu-Ray. Just keep in mind it isn’t as pristine as other releases tend to be.

This film was also recently released by 88 FIlms and, from screenshots, seems to be about par with their transfer, maintaining the 1.67:1 aspect ratio.

There are two audio tracks for the film, one an English dub and the other Italian, presented in DTS-HD Master Audio 2.0 for English and Dolby Digital 2.0 mono for Italian. While the English dub is a bit more punchy and dynamic, I prefer the Italian audio due to some of the awkward English dialogue. However, a problem with this Severin release is that there is no translated subtitles for the Italian track – it uses the English dub subtitles and often creates a distraction when the dialogue does not match up. I would have preferred two different subtitle tracks for this purpose.

The extras are where this release really shines. This is a 2-disc package and Severin Films has really come through with a Goblin soundtrack CD for the first 2500 copies sold of this Blu-Ray. This adds a great value to the release especially for those that already own the 88 Films version; while a lot of the rest of the package matches that previous release, the CD elevates the whole set.

Likewise, there are two new interviews with Franca Stoppi and Cinzia Monreale, both of them reminiscing about the shoot (including the boob-sucking scene, the gross porridge, and Monreale playing two characters). Joe D’Amato: The Horror Experience is an older hour+ interview with Joe D’Amato and others included on previous releases, as is the 20 minute Locations Revisited featurette. There’s a nice Goblin performance of the title track from 2016. A theatrical trailer is also included on the disc.

All told, the special features (especially the Goblin CD if you can get it) make this release worth a purchase, even if you already own the 88 Films version.