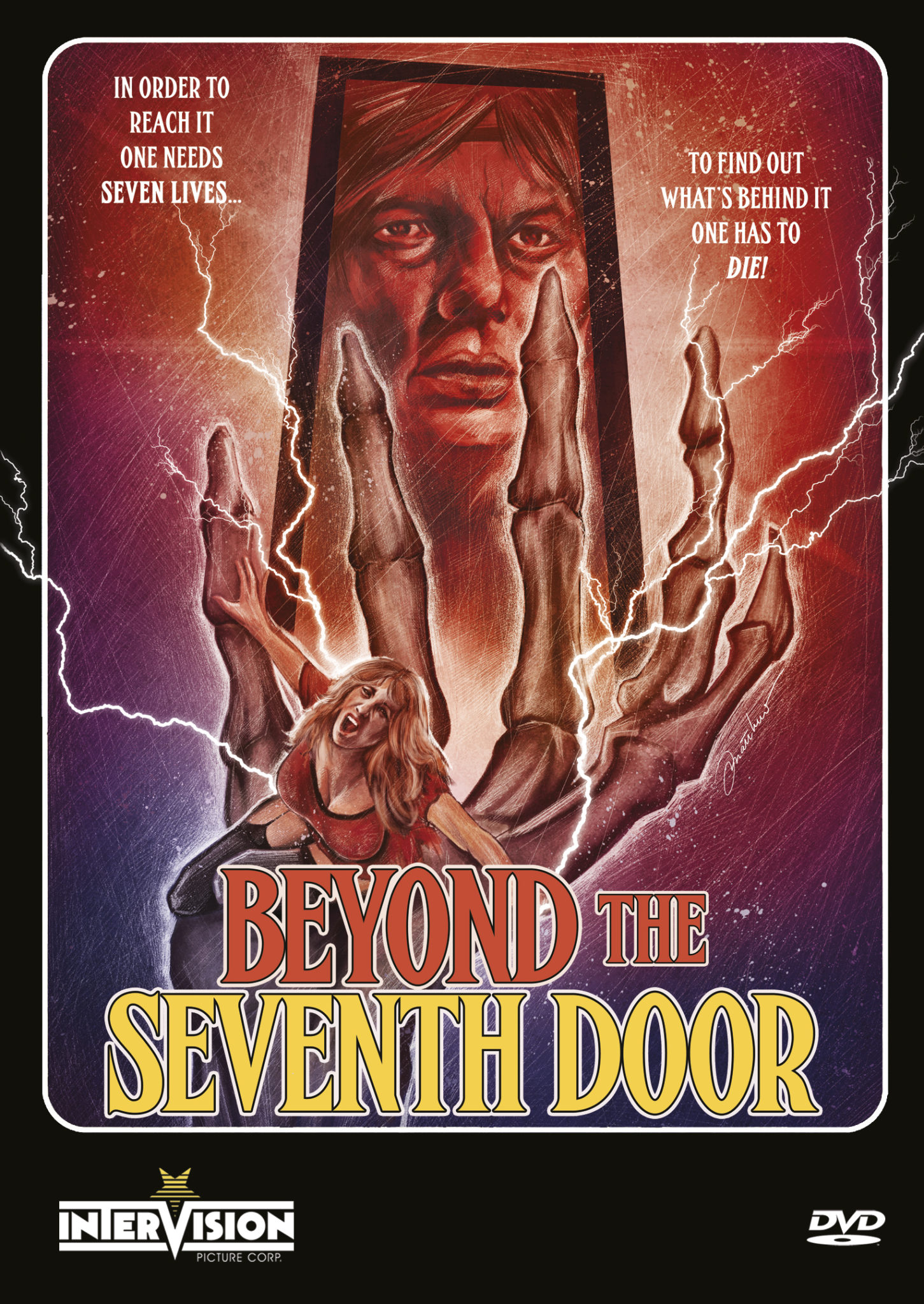 A convicted thief named Boris and his ex Wendy team up for one last robbery – the massive castle that Wendy has been working in as a sort of escort for the mysterious rich owner. Supposedly, there’s a basement room where the man keeps all kinds of treasures; however, the two soon find out that the secret stash is hidden within numerous booby-trapped rooms, and Boris and Wendy learn they’ve underestimated the ease of this job.

Beyond the Seventh Door is a film that sits well within the style of film termed “canuxploitation.” Directed by Bozidar D. Benedikt, AKA BD Benedikt, the movie follows two robbers as they work through a series of more intricate rooms that separate them from a very undefined treasure; there’s a castle, there’s a woman running around in a skimpy red dress, and there’s a Serbian man who’s very difficult to understand delivering his lines exactly like Tommy Wiseau 19 years later in The Room. If you’re not intrigued by this point, it’s best to not even give this 77 minute film an ounce of your time.

For those who do find themselves interested in Beyond the Seventh Door, though, they’ll find themselves knee-deep in a crappy VHS film that has very little plot besides the initial setup I’ve just laid out. All of the characterization for our two protagonists Boris (Lazar Rockwood) and Wendy (Bonnie Beck) is minor at the best of times, with Boris simply summarized as a two-bit crook who has already been in jail for his crimes and Wendy working for the castle’s owner as a sort of escort allowing him to do what he wishes with her for a price. Other than that, writer/director Benedikt has little care for any other development for these characters, and he launches right into the meat of the storyline as Boris and Wendy break into the castle’s secret area and travel through multiple doors on their quest to find treasure.

In some ways, Beyond the Seventh Door plays out like a weird Indiana Jones movie, or in more conventional reference a Saw trap. Truthfully, Benedikt does precede Jigsaw’s games by two decades, and some of the puzzles in the labyrinth are smartly written – like a riddle about Saturn’s son Janus. The seven doors have some tense moments, and Benedikt manages to craft a compelling idea out of something so simplistic.

However, his direction leaves something to be desired. Though the film only runs 77 minutes, its scenes are far too slow. Benedikt doesn’t know when to cut, and most of the puzzle scenes could use some serious editing. The sheer length of each of the traps makes the film feel longer than it truly is, and if Benedikt had cut about five minutes out of every scene Beyond the Seventh Door probably would have been an exceptionally fun experience.

It’s still an odd, entertaining little film, but that’s mostly due to the acting itself or the questionable writing (at one point, after a death-defying escape in freezing cold water, Boris begins to force himself on Wendy; she denies him until finally she accepts, exclaiming, “Make love to me, Boris!”). Fans of exploitative cinema will absolutely enjoy this; casual viewers, not so much.

Not very much at all besides a final, hilarious explosion. The rest of the film revolves around more tense lead-ups than actual violence.

No true nudity; however, Bonnie Beck does show some skin in her stockings and garter, especially after she rips her dress up.

Intervision Picture Corp. has released Beyond the Seventh Door on DVD with a surprisingly good transfer of the film. Besides a couple of tracking lines, the picture is clean and free of obvious VHS abuse. There are some damage spots but this is nowhere near as blurry or damaged as some other VHS/SOV releases that I have seen. It’s actually kind of remarkable to have the film in such good quality.

The film gets a Dolby Digital 2.0 mono track which sounds good, with no real issues. The only problem is that Rockwood is at times difficult to understand, and it would have been nice to have a subtitle option.

For a 1984 forgotten film, Intervision includes quite a few features. There’s an audio commentary from B.D. Benedikt and Lazar Rockwood with Paul Corupe from Canuxploitation.com; also included is a new unreleased interview with the three that lasts about 22 minutes. A somewhat unconnected feature also explores Ben Kerr, the eccentric man from Toronto who is featured as the corpse in the film. It’s not a vital watch but at 9 minutes, it does explore some interesting background about Kerr and how he wound up in the film.