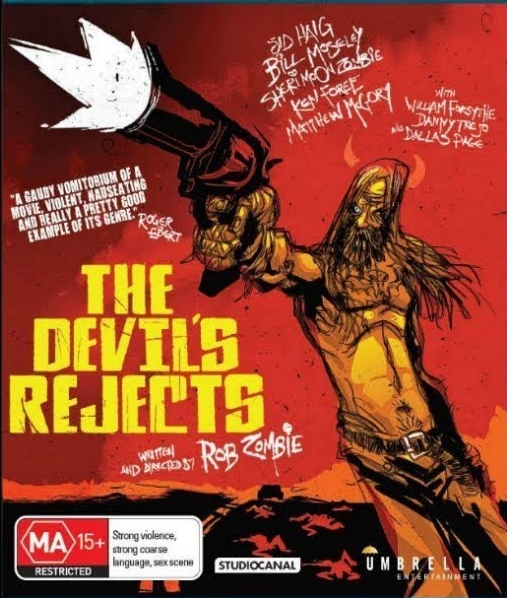 After the conclusion of House of 1000 Corpses, the Firefly family think everything is a-ok. However, cops show up to raid their home and Otis and Baby flee the carnage and meet up with Captain Spalding. As the trio drives across the country looking for safety, a trail of bodies follows in their wake. Meanwhile, a rogue cop is hot on their tail, and Rob Zombie tries ever so hard for the viewer to feel some sympathy for these sadistic killers. He fails in that aspect.

Editor’s Note: Although I agree with what “Rob Zombie” has to say about The Devil’s Rejects, I don’t completely condone all the foul language. However, to be fair, I allowed free rein, and the following is what transpired.

Maybe I’m getting too fucking old to fucking care about any of Rob Fucking Zombie’s fucking movies. I fucking remember when I watched House of a 1000 Corpses, the first fucking movie by Mr. Robert Zombie, and at the time I really enjoyed the fucking shit out of the fucking thing. When The Devil’s Rejects came out in fucking 2005, I ran my fucking tight ass into the theatre and sat the fuck down with my prick in my hand, ready to have Zombie shoot his fucking load all over my tits. At the time, I fucking loved the movie. Now, however, I have grown the fuck up some, and my tastes have changed. When I fucking watched The Devil’s Rejects for the first fucking time since seeing it in the fucking theatre, I couldn’t wait for the fucking thing to end. Why is that you fucking ask? Well, because Rob Zombie doesn’t know how to write a fucking script without a ton of nonsense, trailer trash fuckwad of a fucking fuckfest dialogue, and of course, he needs to cram in that fucking piece of ass wife of his Sheri Moon into the fucking movie, even if she can’t fucking act her way out of a fucking pissed soaked paper bag.

The Devil’s Rejects fucking starts off a little bit after the fucking end of House of 1000 Corpses, although it would be fucking acceptable to think that it was a fucking entirely different movie, as Rob Zombie decided to change up the fucking look of the film and turn it into a more gritty, fucking ’70s horror flick. This time around the fucking flick looks even more like The Texas Chain Saw Massacre; opening fucking monologue and all. Still, the movie is very much a fucking sequel, and we get to follow the fucking Firefly family, as they escape some dumb fucking pieces of shit cops, who bumble a fucking raid on the home. Bill Moseley returns as Otis, the unlikable fuck who loves to spout nonsense and google at his fucking sister. I’m sure he would love to dip his dick in that sweet, tangy pussy. Speaking of that tangy pussy, Sheri Moon, unfortunately, fucking comes back in the sequel and tries to squeeze out a performance much like trying to squeeze out a fucking shit turd that just won’t drop into the fucking pisser. Also returning is the ever lovable Sid Haig as the creepy as fuck Captain Spaulding, although Spaulding loses his fucking makeup not too far into the film and pretty much becomes Sid Haig playing fucking Sid Haig. We also get subjected to Rob Zombie’s fucking obsession with cramming in a bunch of fucking B- to Z-list cameos of actors we kind of remember from watching those fucking horror films growing up.

It’s unfortunate that Rob Zombie can’t write worth a fucking damn, as he certainly knows how to make a fucking horror film look good. The Devil’s Rejects has tons of fucking stylistic shots all over the fucking place, and you wouldn’t be blamed if you got tricked into fucking loving the film because of that. Sadly, fucking style over substance isn’t going to fix the numerous fucking issues the flick is infested with. The film runs close to a whopping fucking two hours, and here we have Zombie trying to fucking have us sympathise with a bunch of fucking sadistic motherfuckers who have just finished butchering a family. How the fuck do you expect me to like these cocksuckers? No, I’m not going to fucking shed a tear when a fucking rogue cop starts hunting these cockamamie bastards down. Fucking kill them all I say.

That’s the thing with the fucking The Devil’s Rejects. There is hardly a fucking character in this fucking film that you can sympathise with. Maybe the psycho fucking cop who goes after them fucking vigilante style, but everyone else is a deplorable little twat that you want to see die horrifically. Especially after you factor in the fucking fact that you have to sit through Sheri Moon’s fucking intolerable fucking performance. She sure has a nice fucking shitter, though.

This is fucking Rob Zombie we are talking about here. Of course, there is fucking violence in this fucking film. We have headshots, beat downs, mutilations, severed fucking body parts and everything else you fucking twisted sons of fucking bitches would want in a fucking horror film. Sadly, some of the fucking violence is fucking shitty fucking, teabagging, dick sucking, hemorrhoid inducing CGI, which can fucking go to fucking hell and suck the devil’s dick.

If you fucking like uncomfortable fucking nudity during fucking rape scenes, then your fucking dick will be rock hard as Zombie makes sure every fucking woman in this fucking movie shows off her tits, ass and twat. Sometimes it’s nice and other times it can be fucking uncomfortable to fucking watch. Hey Sheri Moon, instead of trying to fucking act, maybe just show us your tits next time. (Editor: Jeeze Mr Zombie, that’s a bit harsh don’t you think?)

Umbrella Entertainment is serving a fucking fantastic Blu-ray package on a fucking silver platter here for you, you fucking whiny twats, so you fucking well better appreciate what they have fucking done for you, you Aussie pricks. From what my blind fucking eyes can see, the video transfer looks the fucking same as the other Blu-ray releases out in the fucking wild, but that is actually a fucking positive as those looked just as fucking nice as you want this fucking trash heap of a film to look. Rob Zombie injected a bunch of lovely fucking film grain into the picture to give it that fucking gnarly ’70s look, and on fucking Blu-ray, it looks fucking fantastic.

The same can be fucking said for the audio presentation, with a 5.1 DTS-HD track offered up on a disc, with some fucking English subtitles, which means you can fucking mute the film and read it instead, saving your fucking precious little fucking ears from suffering through the fucking dick-twisting dialogue.

Extra fucking Features on the fucking Blu-ray consist of a lot of fucking stuff that was originally included on the DVD release in the US. Oddly enough, no fucking commentaries have been included, which is a fucking shame. Also, 30 Days in Hell: The Making of ‘The Devil’s Rejects”, a 2 and a fucking half hour making of is not present. Still, the features that are fucking included are pretty cool and a welcome fucking addition. Plus, that fucking cover is the fucking tits-magee.