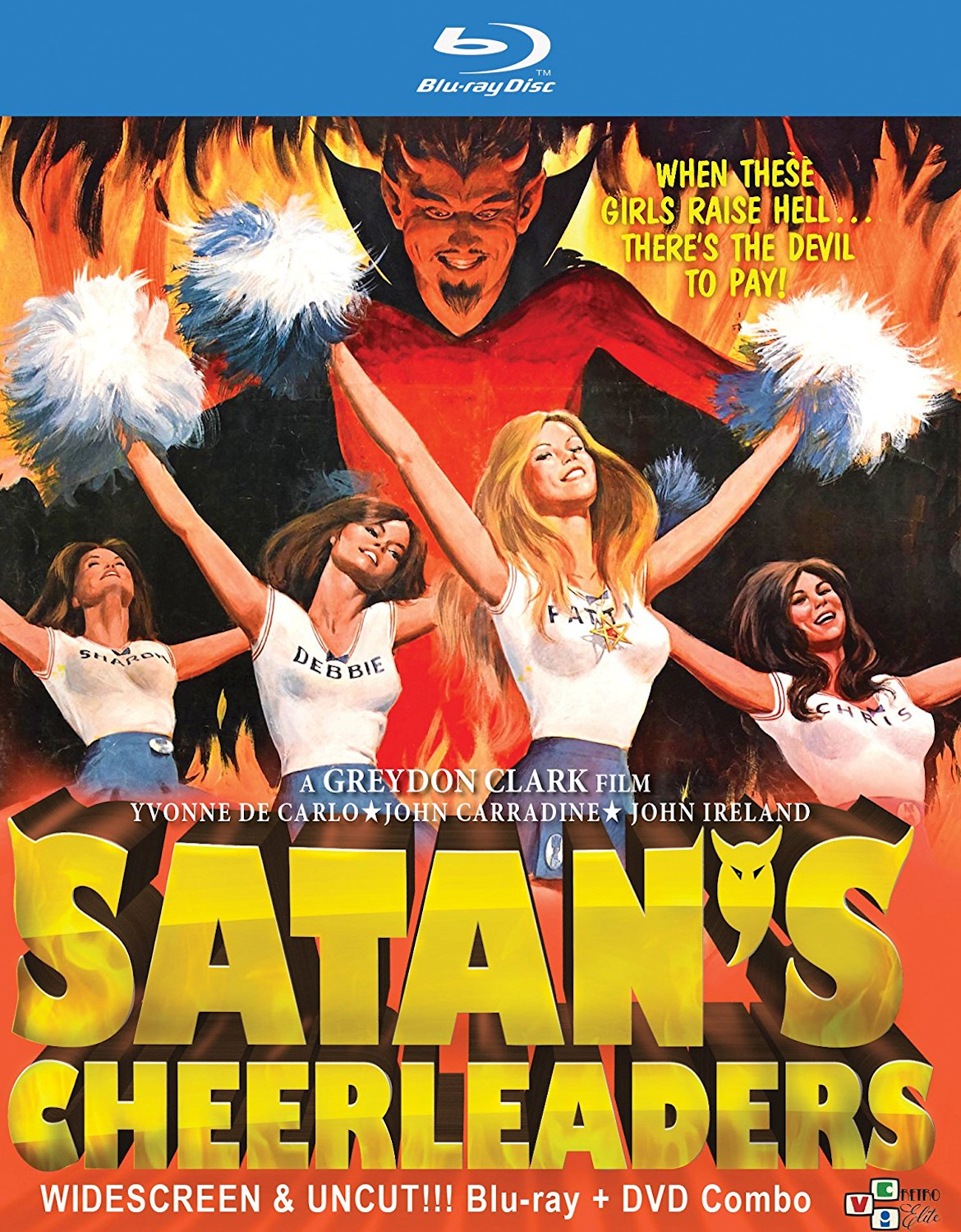 A group of dumb-as-a-rock cheerleaders are picked up by their local Satanic High School Janitor, and he forces them to participate in a bit of cult/altar action. The cheerleaders manage to get free, but inevitably end up back in harm’s way as they run afoul of the other cult members.

Satan’s Cheerleaders is going to appeal to only a select group of people. Those people will be the ones that love poorly put-together films, with terrible acting, awful music, and a story that has no coherent point. Schlock fans are going to love Satan’s Cheerleaders. Usually, I would love something like this, but sadly, I felt that the flick bordered a bit too much on the dull side. If they threw in some more nudity – what little they provided was welcome – and some more Satanic wackiness, I might have been more willing to accept all the faults. Unfortunately, the movie has large sections of absolutely nothing going on. It often borders on torture.

The plot, if one can call it that, involves a group of beautiful cheerleaders who are on their way to the big game when their car breaks down. They get picked up by the high school janitor, who happens to be part of a Satanic cult and is looking for the perfect virgin. I’ll be honest here, the janitor picked the wrong group of girls, as the only virgin in this group is going to be the gym teacher, who ranks a 10 on the worst teacher scale. She has no problem letting them drink, have sex and cause all sorts of mayhem. She just smiles her little smile and says “Uh jeez, girls, that’s not nice.”

Finally, after we get to the kidnapping and Satanic shenanigans, we are finally introduced to the “key players” in the film. Now, I’m not entirely sure how they got these actors to sign up, but John Ireland (I Saw What You Did), Yvonne De Carlo (The Munsters), and John Carradine (The Sentinel), who looks like he might have accidentally wandered on set, all show up to put in what can only be described as a bare minimum performance. As it turns out, all of them were on set for only a few days. Basically, long enough to cash the paycheck.

What’s funny about Satan’s Cheerleaders is that everyone looks like they were given a different script to read and remember. Many various plot threads are happening at once, but none of them ever come together. If one were to pull at any of the threads, the whole thing would fall apart.

So, you can see that Satan’s Cheerleaders is a terrible film. There is no hiding that fact. It’s right there in front of you as soon as you hit the play button. Nevertheless, the film does have some redeeming qualities, but most are accidental. The awfulness of everything makes the viewing a bit more tolerable, bearing in mind you have friends and plenty of drinks on hand.  Plus, the cheerleaders are all damn good looking, with Kerry Sherman putting in the best performance (okay, I only say that as she gets naked the most out of all the girls).

As a coherent piece of cinema, I can’t recommend Satan’s Cheerleaders, but if you don’t mind being subjected to a terrible plot, extended boring scenes, and so much cheese it’s overflowing, you’ll probably love the film. I’ll leave it up to you to decide what matters the most.

Satan’s Cheerleaders isn’t what I would describe as violent. There are a few bloodless scenes of death…well, one death. Overall, there isn’t much red stuff.

As much as Satan’s Cheerleaders is a terrible movie, VCI decided they were going to take the risk and release it on Blu-ray. The package touts a new 2K scan made from the original 35mm negative, and the main menu offers up two choices: Restored Version and Original Version. I watched the “restored” version, and the transfer isn’t exactly pristine, but given the film, that was always going to be a given. Dirt and debris are noticeable and the film hardly ever looks sharp, but in all honesty, this is probably the best the film has ever looked. As for the “original” transfer, I quickly went through it, and I didn’t notice a massive difference between the two. There are some instances of a worse transfer in the original, but nothing I would spill my drink over. I wish VCI would have provided some information on what differences are present between the two.

As for the audio presentation side of things, the film is offered in LPCM 2.0, and besides the hiss at times and a bit of distortion here and there, the sound is clear enough to hear all that atrocious dialogue and music. Maybe this is one time where a lousy audio presentation would have been preferable.

Surprisingly, there are a few notable features on the disc, such as the two audio commentaries (yes folks, two audio commentaries for Satan’s Cheerleaders!). One is with the director himself, Greydon Clark, and the other is with director David DeCoteau (who has also done some terrible movies) and film historian David Del Valle. Also provided on the disc are a photo and still gallery. Given the fact that VCI could have simply released a bare-bones package, I applaud them for giving us some goodies to munch on, even if said goodies are for a film that is mainly empty calories.