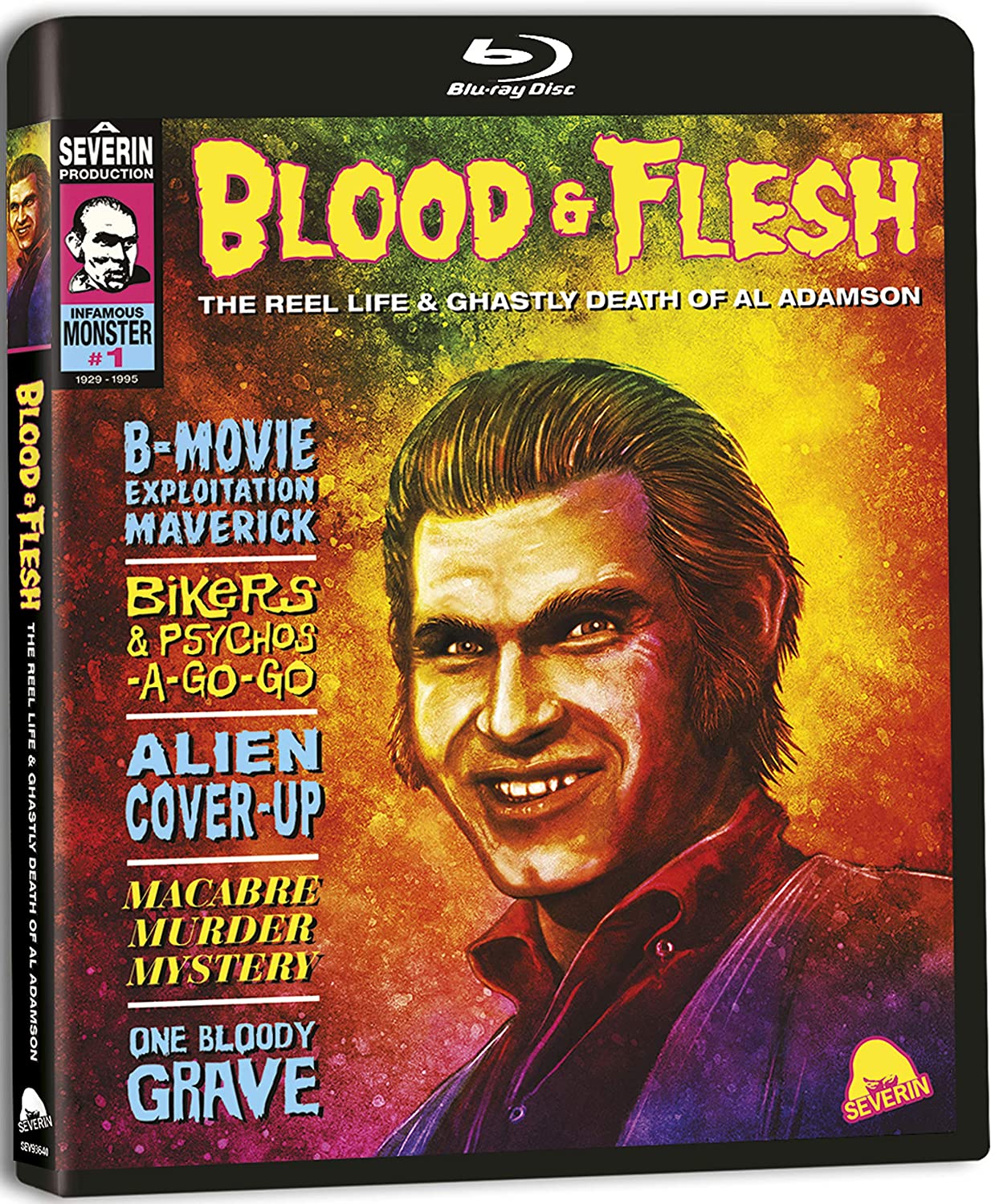 The people in Severin’s camp have had an Al Adamson obsession for some time; they’ve pretty much acquired the rights to all of his films, releasing them either piecemeal or as part of their massive Al Adamson boxset. Along with that undertaking, they also sought to document the backstory behind Adamson’s life in cinema, a trajectory that happened to look like a lot of other prolific B- and Z-grade directors until it took a strange and tragic turn. Blood & Flesh: The Reel Life & Ghastly Death of Al Adamson travels throughout Adamson’s storied career in Severin’s usual high quality fashion (see also Lost Soul: The Doomed Journey of Richard Stanley’s The Island of Dr. Moreau, another David Gregory/Severin production), and then takes a turn to true crime to explore the murder that mimicked fantasy.

Blood & Flesh assembles a host of people from Adamson’s life, including members of his crew, his later girlfriend, his caretaker, film historians, and even a vintage interview with Adamson himself to contextualize the full gamut of his filmography. It, understandably, starts at the beginning, touching on Adamson’s father’s role in the business and then the early films that were shelved for lengthy periods of time before reshoots could get them into studios. One thing that Blood & Flesh makes clear is that, while Adamson’s projects might not have been blockbusters, it was his ingenuity that caused him the most success. That, and renaming films multiple times in order to milk the most out of their premises.

The documentary spends quite a lot of time on Adamson’s heyday and runs through some of his most popular hits, including Dracula vs. Frankenstein and Satan’s Sadists, all with a terrific editing style that keeps the film moving at a rapid clip. Gregory isn’t afraid to shy away from some of the criticisms lobbied at Adamson, and he takes particular focus on the shadier side of some of the production elements that kept Adamson in business – the man was certainly stingy with his money, and multiple crewmembers talk about rarely getting paid for their work. Still, most of them have some type of respect for Adamson’s accomplishments; while many wouldn’t categorize his films as “good,” there’s clearly an appreciation for his work ethic and how working with Adamson helped to further others’ careers.

Probably the most interesting element of Blood & Flesh, though, is its last half hour, which spins a pretty standard story about a bad movie director into an awfully weird direction. First, Gregory gets into Adamson’s later life obsession with UFOs and aliens, something that both his girlfriend Stevee Ashlock and Sam Sherman still agree was a dangerous foray into unknown, potentially unauthorized territory. Ashlock also claims Adamson met a half-alien half-human being with “documentation,” whatever that might mean. Then Blood & Flesh dives into the somber element of Adamson’s murder, a senseless act committed by a handyman Adamson had hired on the cheap.

Overall Blood & Flesh is both entertaining and well-made, a documentary that should appeal to anyone interested in cult cinema. In many ways, Adamson’s life reflects a lot of the same elements as other well-known cult auteurs; but learning the history behind it all and getting into the meat of it is truly the appeal here.

CHECK OUT
Extensive screenshots from this Blu-ray!

Severin Films’ Blu-ray looks good for this documentary, which is unsurprising considering their production credits for the film. They’ve treated this release rather well with a good HD picture with no real issues – obviously the footage can be variable with the film splicing in footage from all kinds of different movies in Adamson’s oeuvre, but the talking head footage is crystal clear.

Audio is presented in both DTS-HD MA 2.0 and 5.1 tracks, with the 2.0 being the main audio on this release for some reason. Both sound good and nearly identical since the surround sound elements aren’t used much. There are also options for English, Spanish, French, and Portuguese subtitles.

Extra features include outtakes (better defined as deleted scenes) that run about 20 minutes, along with a promo for the unreleased Beyond This Earth film, a trailer, and a poster gallery for Adamson’s films. Also included as a double-feature is Adamson’s film The Female Bunch, AKA A Time to Run. The quality is pretty suspect as per Severin Films the original negative has most likely been destroyed; thus they have assembled footage from various 35mm prints that vary quite wildly. While the film is actually pretty bad – it’s certainly far too boring for the amount of sex, nudity, and Western-style antics featured – it’s still a nice extra to be included here, especially since it’s unlikely it will get a solo release.

Even The Female Bunch gets a couple of extras including a new featurette with Russ Tamblyn, Leslie Mcray, and Sharyn Wynters discussing the making of the film and a trailer.

Overall, Severin packs this release with extras, making it a worthy pick-up for anyone interested in the magic behind cult films.