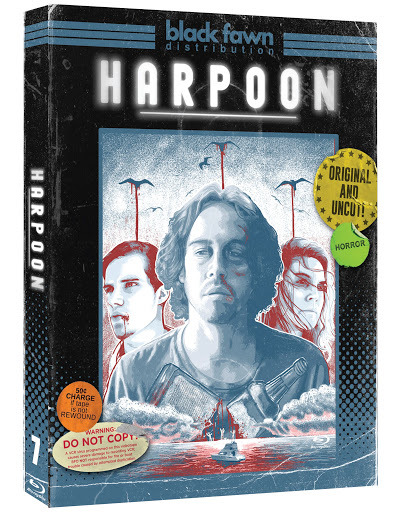 Sometimes a limited set piece and only a few characters in a film can hurt a movie. However, in the case of Harpoon, which stars only three actors on a boat set adrift, the film is propelled above many other movies thanks to a crafty script and some dark humour. There is also more to the film than meets the eye, but to go into detail would ruin your viewing experience.

The basic premise for Harpoon sees three friends heading out on a boat to catch some rays and to make up for some harsh decisions recently made. One of the friends, Richard (Christopher Gray) thought his best friend Jonah (Munro Chambers) was sleeping with his girlfriend Sasha (Emily Tyra) and his reaction was a bit extreme. However, it turns out it was all a misunderstanding and to make up for it, they head out to the open sea, where a bit of booze and differing stories turns the trip into a suspicion game made only worse when the boat won’t start and the food beings to run out.

Instead of going for something akin to say Dead Calm, director Rob Grant decides to inject some dark humour into the story to make it a bit different than what could have easily been a tired story. Another positive comes to the performances from our three leads who manage to play off each other wonderfully. The only negative I can lob at the film would be the ending, which may or may not leave the bitter taste of salt water in your mouth.

Harpoon arrives on Blu-ray from Black Fawn Distribution who deal with a lot of other lower budgeted independent horror films such as Bite, and The Ranger. The Blu-ray sports a fancy retro-style slipcover, a solid video and audio transfer, along with an assortment of special features. You’re looking at three audio commentaries with cast and crew (one of the commentaries is with the director who pops a few mushrooms before recording!). A 30-minute behind the scenes featurette, deleted scenes with commentary, B-roll footage with director commentary, and trailers fill out the rest of the Blu-ray. What could have been barebones, has instead been filled up nicely with plenty of features to keep fans busy.

Harpoon takes the simple story of isolation and paranoia and puts a dark humourist twist on it. The Blu-ray from Black Fawn is filled up with features and offers solid audio and video. I recommend checking this one out!