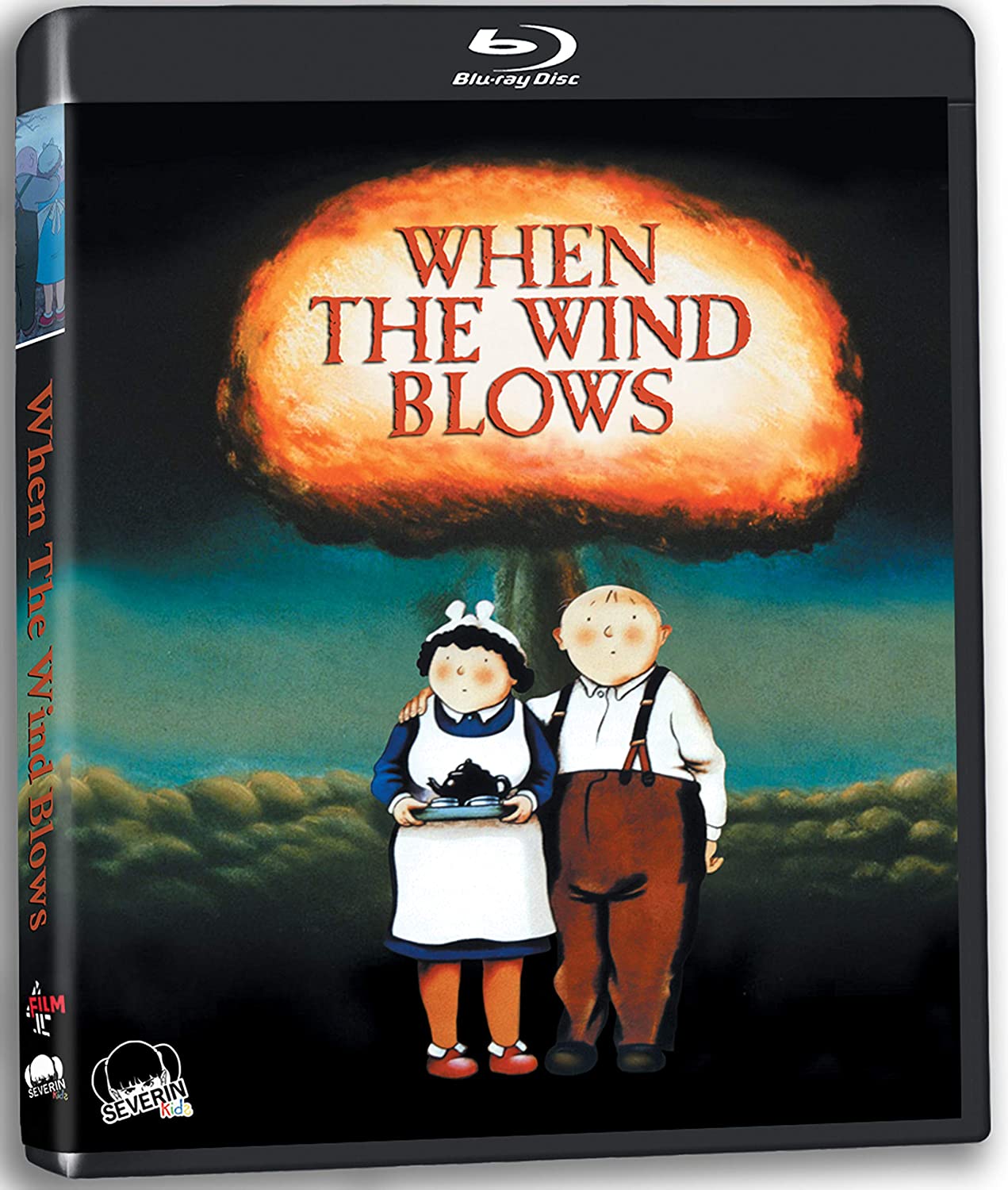 Threads but for kids

In the course of human cinematic history, there have been a number of monumental films about the devastating real-life impact of nuclear apocalypse. Threads, a film Severin Films has also previously released on Blu-ray, is probably my number one pick for harrowing emotional experience. The Day After is another TV movie that manages much of the same impact and is also listed as one of the most compelling doomsday films of all time. Just slightly behind both of those movies comes When the Wind Blows, a 1986 animated film from director Jimmy T. Murakami based on the book of the same name by Raymond Briggs. Populated almost entirely with just one British couple, Hilda (Peggy Ashcroft) and Jim (John Mills), the film teeters along following the duo as they prepare for a potential nuclear bombstrike using government-issued pamphlets.

When the Wind Blows‘ unique 2D and 3D animation technically seems to fit the movie into the childhood animation demographic, and Severin has indeed packaged this as part of their Severin Kids line of films. But the emotional turbulence of the film, due in large part to the close-knit relationships the viewer forms with Hilda and Jim and their stoically uplifting outlooks, means that the ending of the film might be a bit mentally traumatic for little tikes. Murakami’s direction and Briggs’ script features fairly mundane stuff: Jim building a makeshift fallout shelter in the living room, Hilda prepping for post-apocalyptic tea and crumpets, the parents contacting their adult son to make sure he’s following government guidelines. But in this mundanity is a heart-wrenching story of a lifelong couple who are both naively optimistic about the coming destruction and also relying on governmental regulations to save them from fallout.

While some of When the Wind Blows can linger a tad too long, the film’s buoyed by its wry sense of humor and the naivete of its protagonists. Even in the face of nuclear winter, Jim puts on a brave face and states he’ll head out to the pharmacist the next day for some aspirin. All of this is anchored in the animation’s bleakness, which showcases the beautiful decay of the environment with colorful appeal.

When the Wind Blows doesn’t conclude with an explicit portrayal of the characters’ demise, but it certainly gets there by proximity. They become haggard, vomit routinely, and suffer dehydration. Their visages get noticeably sallow. The film ends with a reference to Tennyson’s “The Charge of the Light Brigade,” a poem intended to honor soldiers who fought and died valiantly but used sardonically here to reference the needless mutual destruction of the human race. Much of this will fly over childrens’ heads, but they might be left wondering why their parents are so tearful.

When the Wind Blows has been released on Blu-ray a few times by various companies, but Severin Kids’ version seems to be a close variant of Twilight Time’s previous limited edition release with a few added bonus features. The video quality looks relatively the same, which is to say: very good. The 2D/3D animation tends to have various film compositions and so grain does change a bit throughout the film, with the most notable grain appearing during real-world sky shots. However, grain scale is medium-bodied with no noticeable compression issues. Color preservation is also well-done. Interspliced war footage looks noticeably aged, as intended. Overall, video quality is solid.

CHECK OUT
Extensive screenshots from this Blu-ray.

Audio is presented with a DTS-HD 2.0 mono track that sounds fair but not extremely full of life. David Bowie’s theme song shines through well, but the characters’ dialogue does sound muffled at times which seems like a recording issue rather than anything Severin has done on this disc. English subtitles are also included.

Extra features are relatively the same as the previous Twilight Time Blu-ray, including the full-length documentary Jimmy Murakami: Non Alien, a making-of special that runs about 30 minutes, an audio commentary with Joe Fordham and Nick Redman, a vintage interview with Raymond Briggs about his story, and the isolated music and effects audio track if you’d like to watch the film like that. Added to this release, though, is the Protect and Serve public information film, an animated movie that replicates the things that Jim tries to do in the film. Also included are film trailers that are not present on past releases.

The packaging also comes with a postcard-size insert with steps on how to make a fallout shelter. Just what any kid needs!