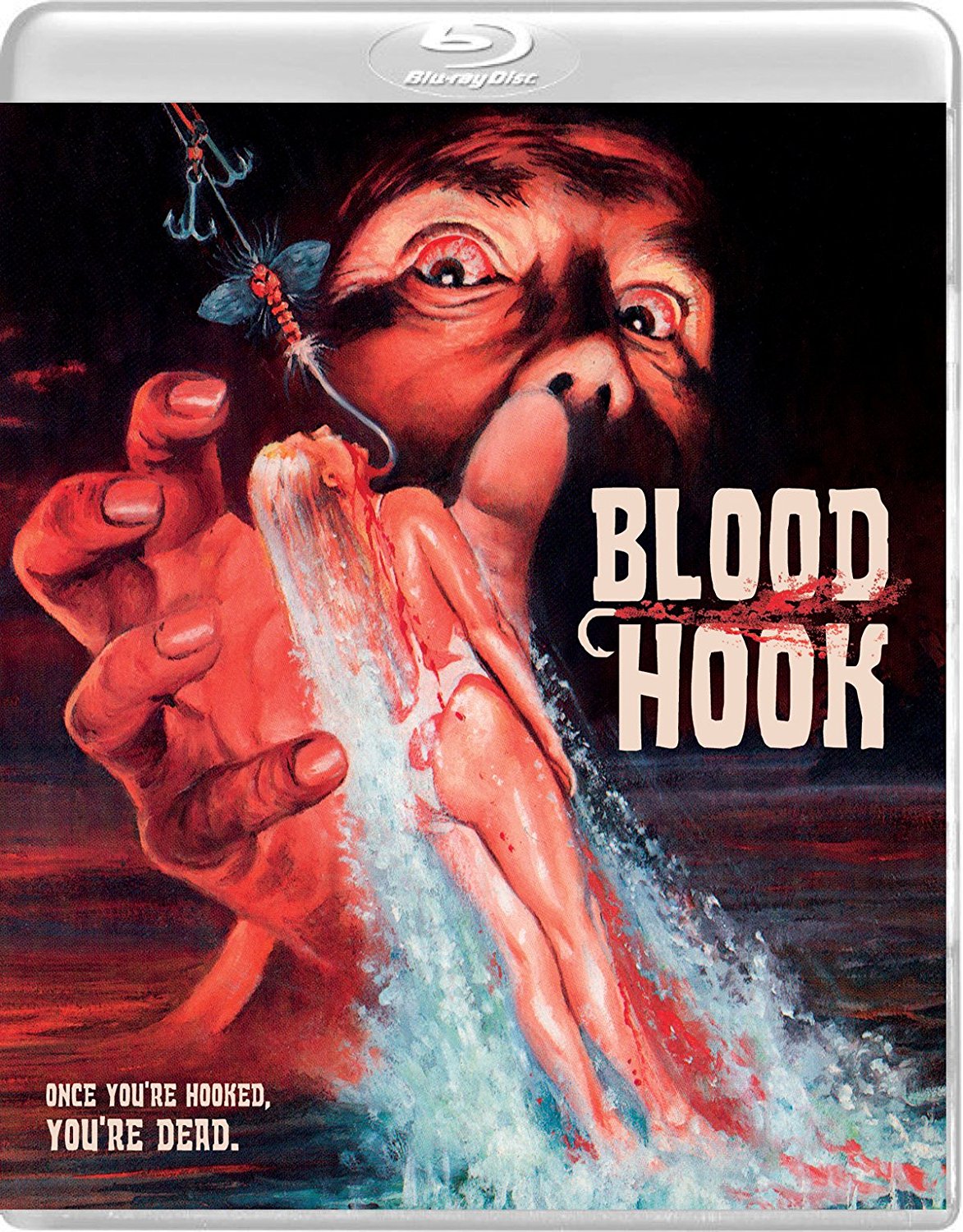 Blood Hook Blu-ray Review (Vinegar Syndrome)
Blood Hook is a very strange slasher film that doesn't always hook the viewer; but its characters are unique and there's a hint of satire hidden somewhere in it. Vinegar Syndrome has done an excellent job on both picture and extras on this Blu-ray.
Film
Blu-ray
Reader Rating0 Votes
4.2

Peter experienced a pretty traumatic moment in his childhood when his grandfather died in front of him while fishing for muskie; he’s never really gotten over it, but he’s back in the area to participate in the Muskie Madness fish-off that takes place every year. His friends are there to help out while staying in his new summer home, and they’re pretty thrilled to take part in the very competitive fishing challenge. Except for one problem: someone in town is driven to murder using a large muskie fish hook, and Peter’s friends keep dying on this fun fishing outing.

In the ’80s, everyone was doing slasher films – there were slasher films for every occasion, from holidays to birthdays, April Fool’s Day to graduation day, slashings at sororities and on trains… And while a lot of directors, producers, and production companies were taking these films completely seriously because serious money was bound to made, there were other camps that saw the humorous nature of unknown persons killing in increasingly ridiculous ways. Enter Blood Hook, an off-the-wall slasher film about a fishing competition in small town Wisconsin gone awry because of a killer sporting a large, muskie-sized tri-hook lure. Banking off of slasher films but clearly inspired by the most reality-detached elements of those films, director Jim Mallon takes viewers through a strange plot full of past trauma and muskie madness.

Early in the film, it’s clear that Blood Hook is going to be strange. After Peter (Mark Jacobs) experiences the strange death of his grandfather, he returns to his old small town to experience the Muskie Madness fishing competition firsthand with his friends, but mysterious deaths linked to an infamous hook killer (and I mean fishing lure hook, not I Know What You Did Last Summer style) ruin the fun and cause Peter to relive his old emotional trauma. It’s a weird setup, one that seemingly wants to emphasize the ridiculous nature of the situation; and much of the film’s plot should be pretty humorous, because it’s difficult to take a guy trawling around in a boat with a rather large hook very seriously.

But Blood Hook‘s comedic intentions rarely surface; this is a film that’s played incredibly straight despite some detours and quirky characters along the way. Either Mallon’s comedy is meant to be incredibly deep-dive, or he simply didn’t understand how to direct Larry Edgerton and John Galligan’s screenplay; either way, the film rarely approaches true satirical levels, instead playing off its funny plot as serious as possible.

Part of that seems to stem from the actors, who never seem like they’re in on the joke. Most of the cast never really did any films before or after Blood Hook‘s release; they fall more into overacting territory, and really only Don Winters as the killer Larry Leudke gives a compelling performance. Still, Blood Hook‘s charm lies in its characters’ eccentricities, especially the townspeople obsessed with the muskie fishing contest. There’s also a backwoods guy obsessed with guns, Peter’s girlfriend Ann (Lisa Jane Todd) who fancies herself a psychologist, and a caretaker who accidentally shot Peter’s grandfather in a very serious gun-fishing accident. All of these things help elevate Blood Hook simply because of its cheesy – and admittedly creative – take on common slasher tropes.

Blood Hook can be a fun film, but this director’s cut is far, far too long at 111 minutes; it doesn’t help that the killings lack variety due to the limited weaponry at the killer’s disposal. The plot wears thin towards the conclusion, and ultimately Blood Hook settles on some pretty weird themes: cicadas influencing people’s behavior, the treatment of war veterans after their time serving in Vietnam, and the unabashed fury of people seeking vengeance on those who caught bigger muskies. Yeah, it’s an odd movie.

Fans of slasher film should definitely see this, though, simply to laugh at some of the ways the genre gets subverted – and the ways it doesn’t. It’s a creative but poorly executed story, and as one of the extra features on this disc admits, Blood Hook doesn’t tackle the satire in a way that makes it as obvious as Edgerton and Galligan’s screenplay suggests. This weird and wacky slasher smells fishy, but it’s also just one of those films that has to be reeled in once.

The violence pretty much centers around the titular fish hook and how it scrapes against human flesh. The blood is quite vibrant but there’s not a lot of gore on display, mostly because the death scenes tend to play out the same every time.

There’s a brief display of nudity from Lisa Jane Todd, who does take off her top before a sex scene. Sara Hauser is also seen multiple times in her bathing suit.

Vinegar Syndrome has released Blood Hook with the full director’s cut version of the film at 111 minutes, and they’ve given it a 2k scan from the original 16mm negative. And surprisingly, this looks great with the new transfer – the footage is crisp and sharp, with a strong color balance and a moderately heavy grain presence that doesn’t get in the way. The film has a couple of soft shots but overall this looks quite good, especially coming from 16mm, and Vinegar Syndrome has done a great job preserving this.

Blood Hook gets an English DTS-HD mono track which sounds good with no issues, though it’s not a particularly memorable soundtrack besides the important cicada sounds. Also comes with English subtitles.

This package comes with a Blu-ray and DVD of the film, each with a disc picture. Also included is reversible cover artwork featuring an original poster, and if you were lucky, you got the special slipcover designed by Chris Garofalo as well.

On the disc itself is a 30-minute interview with director Jim Mallon, who talks about the making of the film and his other work in cinema. There’s a shorter, 18-minute featurette with Lisa Todd who discusses how she was cast Blood Hook and her decision to basically do anything to get the part. Special effects artist Jim Suthers talks about some of the effects and also discusses the oddness of the film and, as I mentioned previously, Blood Hook‘s tonal changes from the script. Finally, a 30 minute audio interview with Marsha Kahm, cinematographer and editor, completes the featurettes; it’s something of a tough listen due to the audio quality, but she does talk about some interesting tidbits from the making of the film. There’s also a photo gallery and theatrical trailer.

This disc boasts a surprising amount of features for this film and it’s definitely recommended for those looking to finally see Blood Hook, especially with the great transfer.