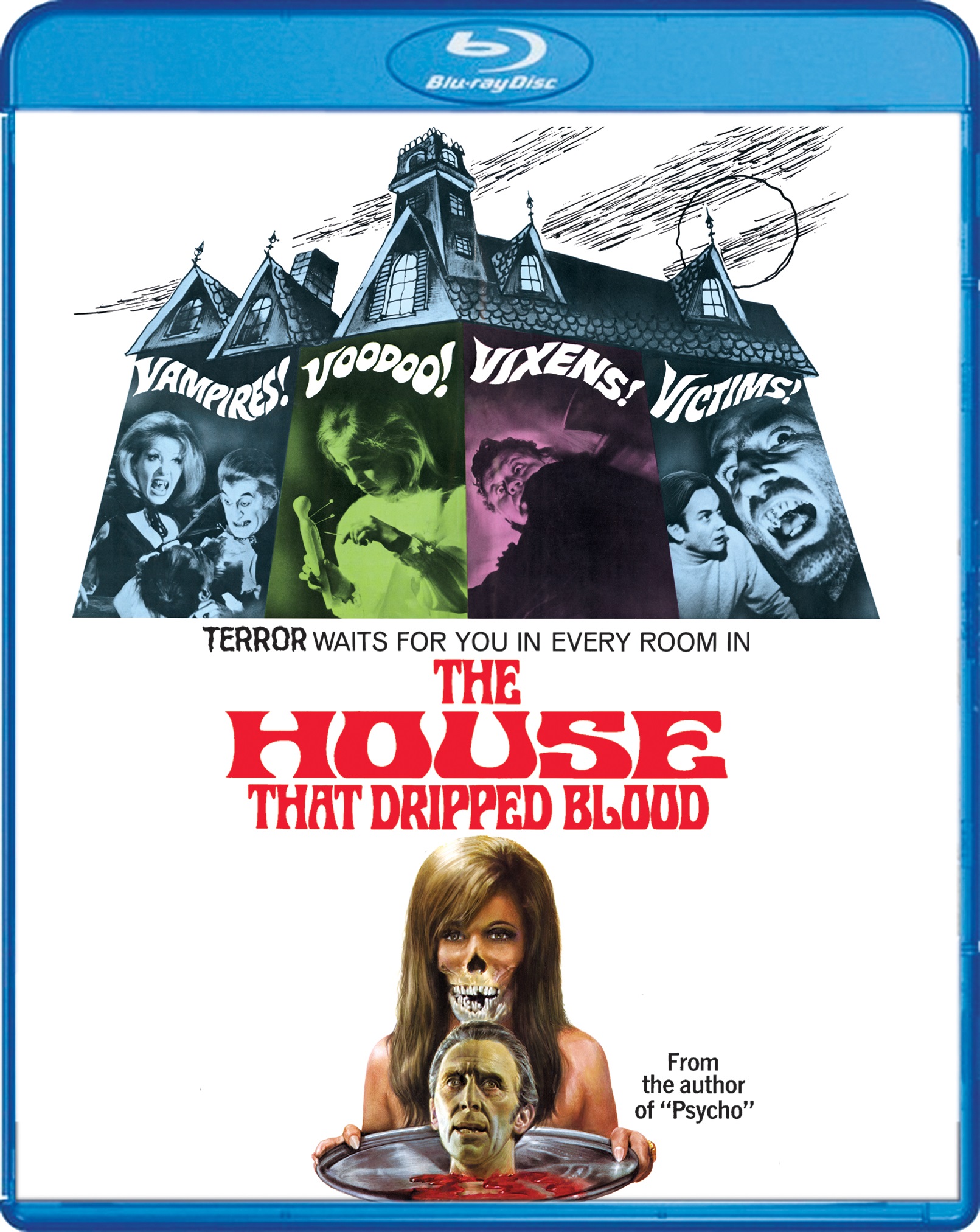 The House That Dripped Blood Blu-ray Review (Scream Factory)
The House That Dripped Blood doesn't exceed with all its stories and tends to avoid including the house as an actual entity, but the tales that do excel are enough to warrant an enjoyable watch. Scream Factory has provided an all-around solid Blu-ray.
Film
Blu-ray
Reader Rating0 Votes
4.3

The House That Dripped Blood sits empty, waiting for its next guest to torment. It has already put Denholm Elliott, Peter Cushing, Christopher Lee, and Jon Pertwee through torture, but it thirsts for more. Maybe you’ll be its next victim! Okay, maybe not, as the house doesn’t really do much but sit on its foundation and watch one man go crazy, another go lonely, a third go afraid of his daughter, and a fourth undead.

Amicus Productions has to be one of my favourite studios. They focused mainly on horror anthologies, which I love, and they had so much talent involved, it was astounding – the likes of Christopher Lee and Peter Cushing to name a few. It’s a damn shame the company closed down in 1977. However, as much as I could go on and on lamenting the loss of a great company, at least we have the films to watch and talk about, which brings me to today’s review, the 1971 movie The House That Dripped Blood, starring the aforementioned Christopher Lee, Peter Cushing, and also featuring Denholm Elliott and Jon Pertwee. It is an anthology film, written by Robert Bloch (author of Psycho) comprised of 4 stories set around a creepy old house.

The wraparound story involves a detective (John Bennett) investigating the disappearance of a prominent actor (Jon Pertwee), who was last seen renting the creepy house I mentioned above. When the detective visits the local police, he gets some backstory of other strange happenings that have taken place there.

The first story, “Method of Murder,” has a struggling author Charles (Denholm Elliott) moving into the house that is soon to be dripping, with his wife Alice (Joanna Dunham). He is hoping the atmosphere and quietness that the house provides will stroke the creative fire, giving him some much-needed story ideas. It is not long before he comes up with a story involving an escaped lunatic named Dominick (Tom Adams). However, Charles starts seeing him more and more around the house, and Dominick is starting to harm the people around him. Is the killer real, or is Charles going insane and harming those he loves? In typical EC Comics fashion, there is more to this story than meets the eye. This is probably my favourite of them all, thanks to the creepy performance of Adams. It’s a short story and doesn’t overstay it’s welcome, unlike some of the other tales told.

The second story titled “Waxworks” sees Philip (Peter Cushing) moving into the house to get away from it all. He just wants peace and quiet, time to reflect and read a book or two. However, he soon grows bored and takes a walk in town and comes upon a waxwork museum, which features a bunch of grisly displays. One display, in particular, reminds Philip of a love he lost long ago. The curator explains that the wax figure was based on his wife, who was a murderer.

A friend of Philip’s shows up, Rogers (Joss Ackland), and after also visiting the museum, he becomes fixated by the same wax figure, so fixated, in fact, that he decides to stay in town so he can be close to the figure. You see, he too is reminded of the same woman Philip loved. Of course, this wouldn’t be an Amicus story without a few horrific twists thrown your way.

“Waxworks “is an odd one, as it doesn’t have anything to do with the house, with all the horror taking place at the wax museum. Still, the ending is pretty memorable and it’s always nice watching Peter Cushing doing his thang.

The third story is called “Sweets to the Sweet” and stars Christopher Lee as a tough father to his child. Lee is a busy man, though, so he hires some help, with the beautiful Nyree Dawn Porter coming in to take care of his daughter. It doesn’t take long, though, for her to disapprove of how Lee treats his daughter, wondering why he is so cruel to her. There has to be some reason why he is so mean, but I’ll never tell!

“Sweets to the Sweet” takes a long time to get going, but eventually, it does bring the much-needed horror we’ve been craving. I won’t spoil any of this one, as the entirety of the story hinges on not knowing what is going to happen.

The fourth story, which ties into the wraparound story, is titled “The Cloak” and tells the detective (and the audience) what exactly happened to the actor who rented the home and went missing not too long after. Featuring a pretty funny performance from Jon Pertwee, and a bosom-filled performance from Ingrid Pitt, “The Cloak” is an odd way to end the movie, with many attempts at humour, with some moments working and some falling flat. Nevertheless, the story, which involves vampires, is enjoyable enough to not rank as the lowest of them (an almost tie between “Waxworks” and “Sweets to the Sweet”).

The House That Dripped Blood isn’t the most memorable anthology film, not even the most memorable of the Amicus Productions list of flicks. Still, it has some delightful moments and a pretty creepy performance from Tom Adams (“Method of Murder”). I did find it odd, though, that most of the film’s stories didn’t have much to do with the actual house. I was expecting an anthology film that had the house doing some crazy hauntings or hell, even dripping some blood, but alas, we do not get that, but we do get some rather amusing tales to waste an afternoon with.

The House That Dripped Blood has a couple of semi-violent moments, but it isn’t overflowing with the gore. Some decapitations, a few stranglings, and a bit of vampire action, but it’s all a bloodless affair.

Unless we count Ingrid Pitt’s heaving bosom as nudity, this is one dry film.

The House That Dripped Blood is presented on Blu-ray for the very first time (originally Severin Films was going to release it, but that fell through for reasons unknown) and the presentation is highly acceptable, featuring an even grain-field, with hardly any dirt and debris present. The picture can be soft at times, but for the most part, the flick looks wonderful.

Audio is presented in English 2.0 Mono DTS-HD MA with no issued present; well, none that I could hear. The dialogue was loud and clear. English subtitles are provided. 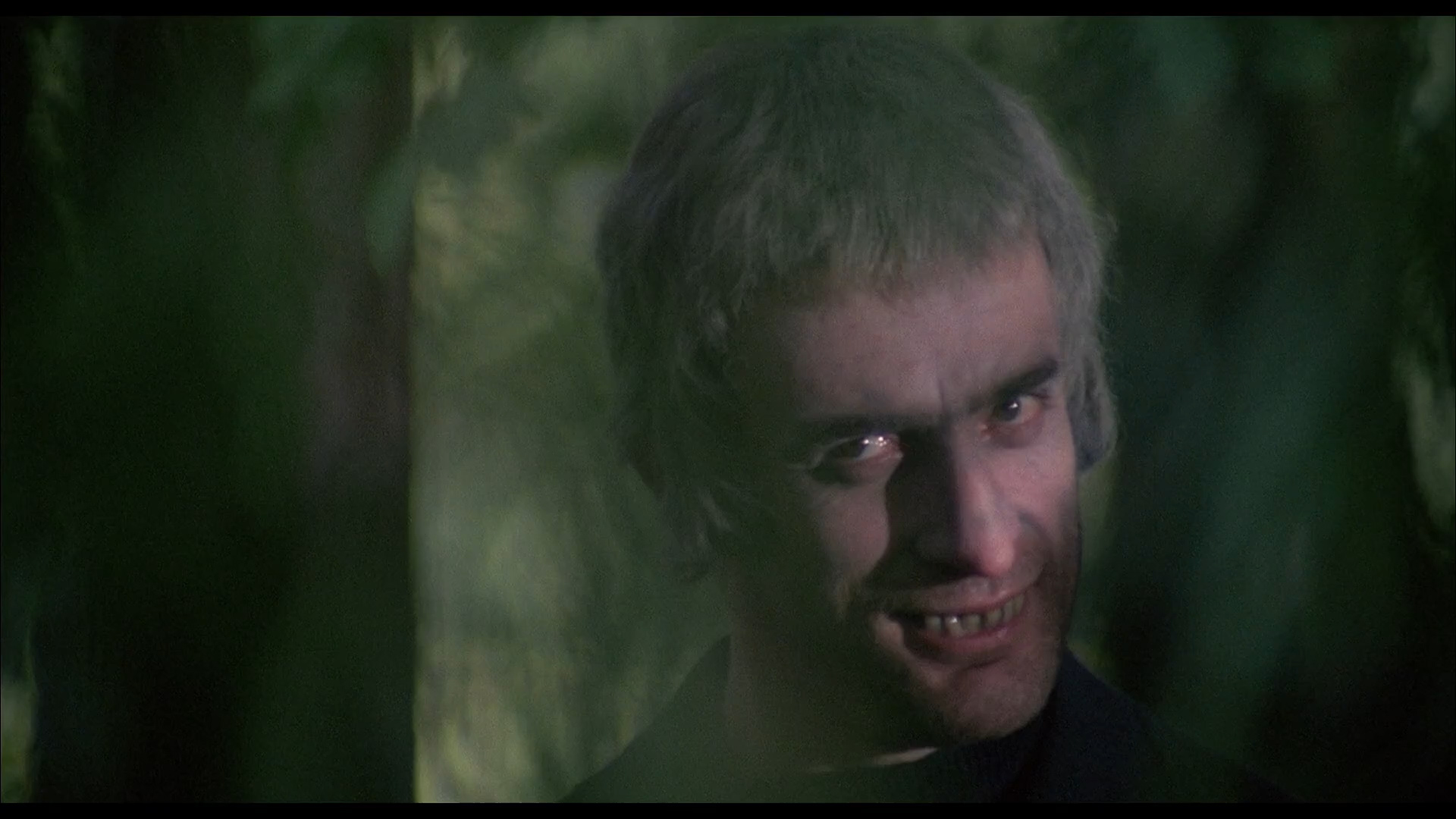 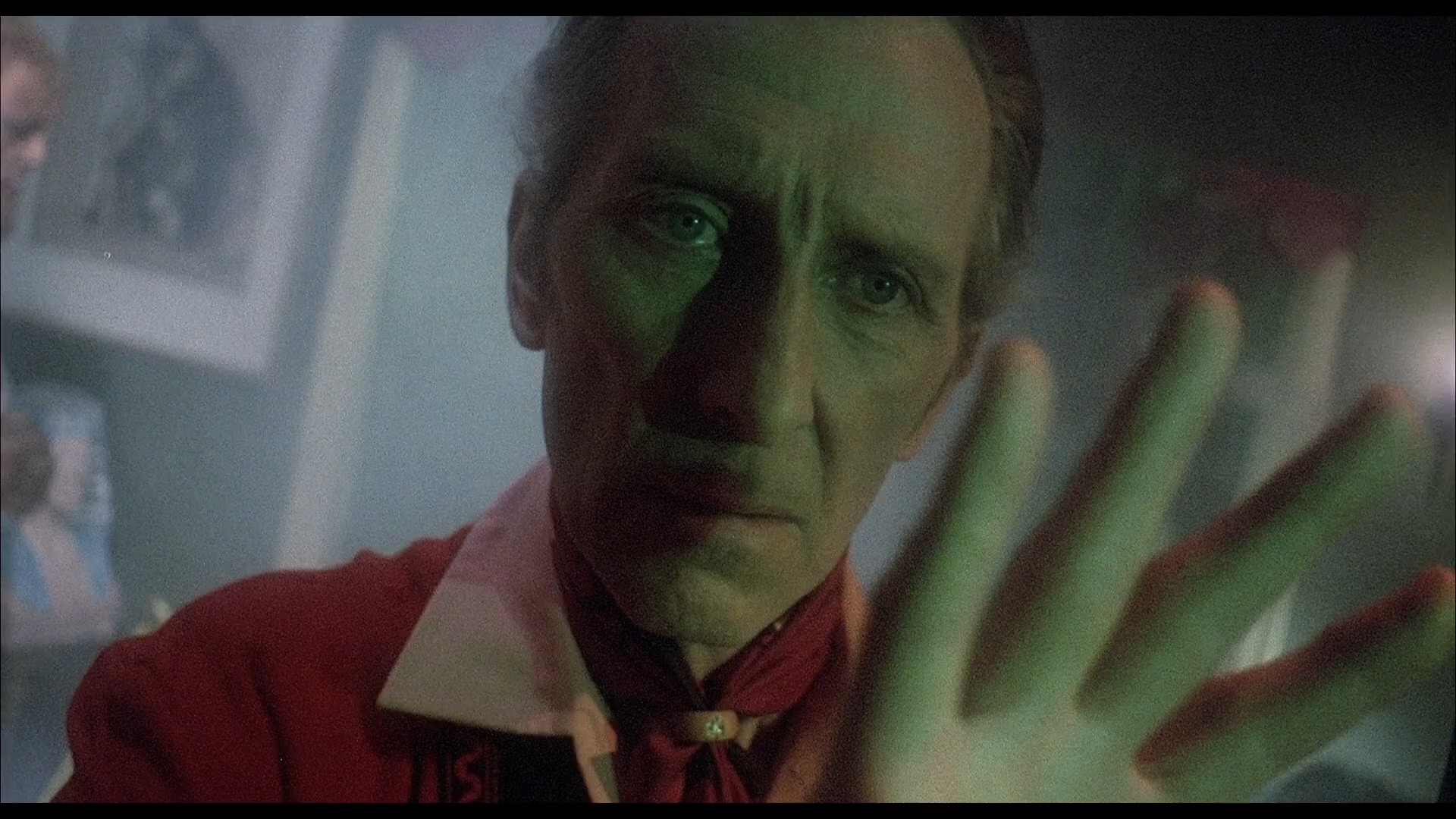 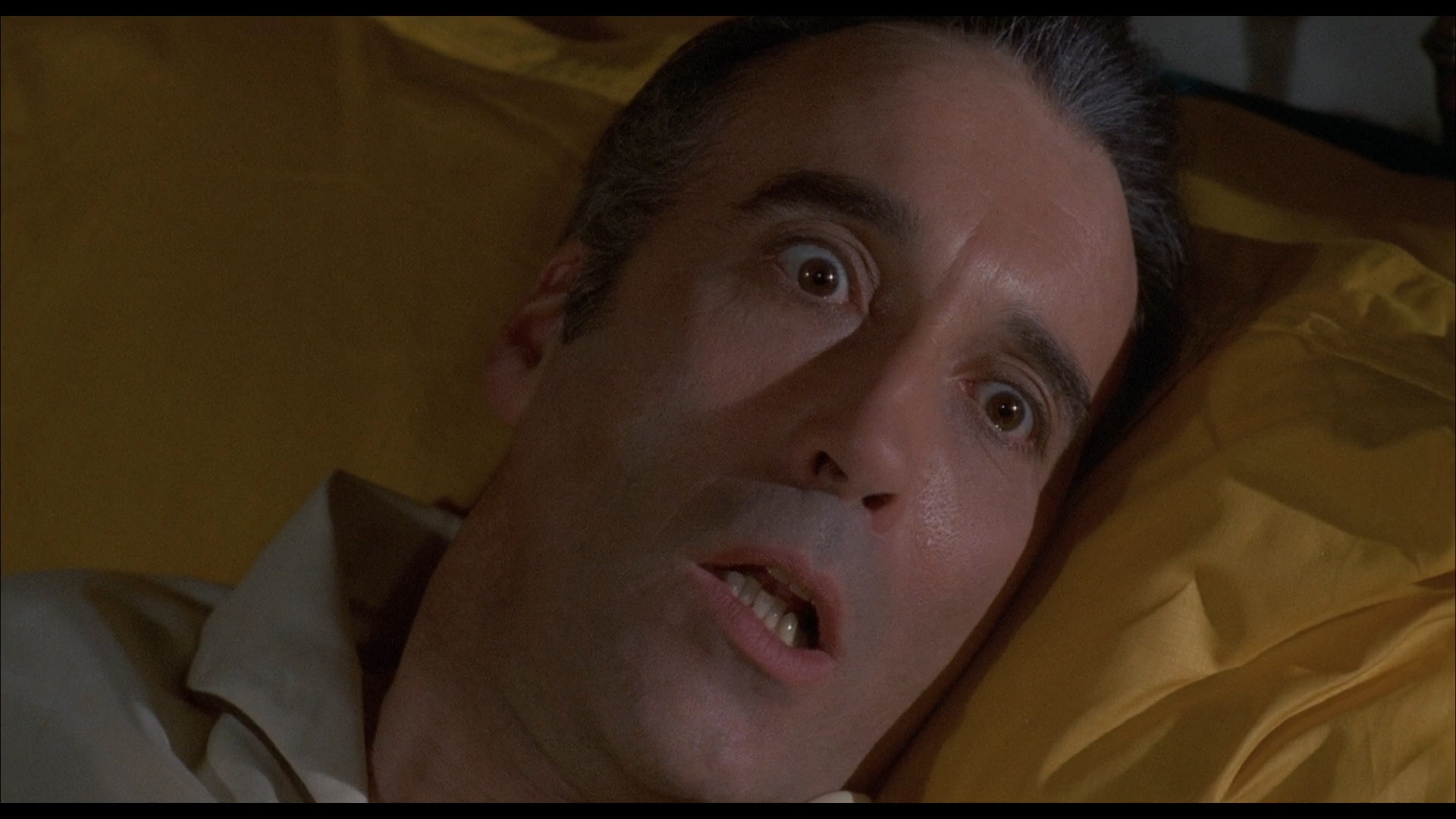 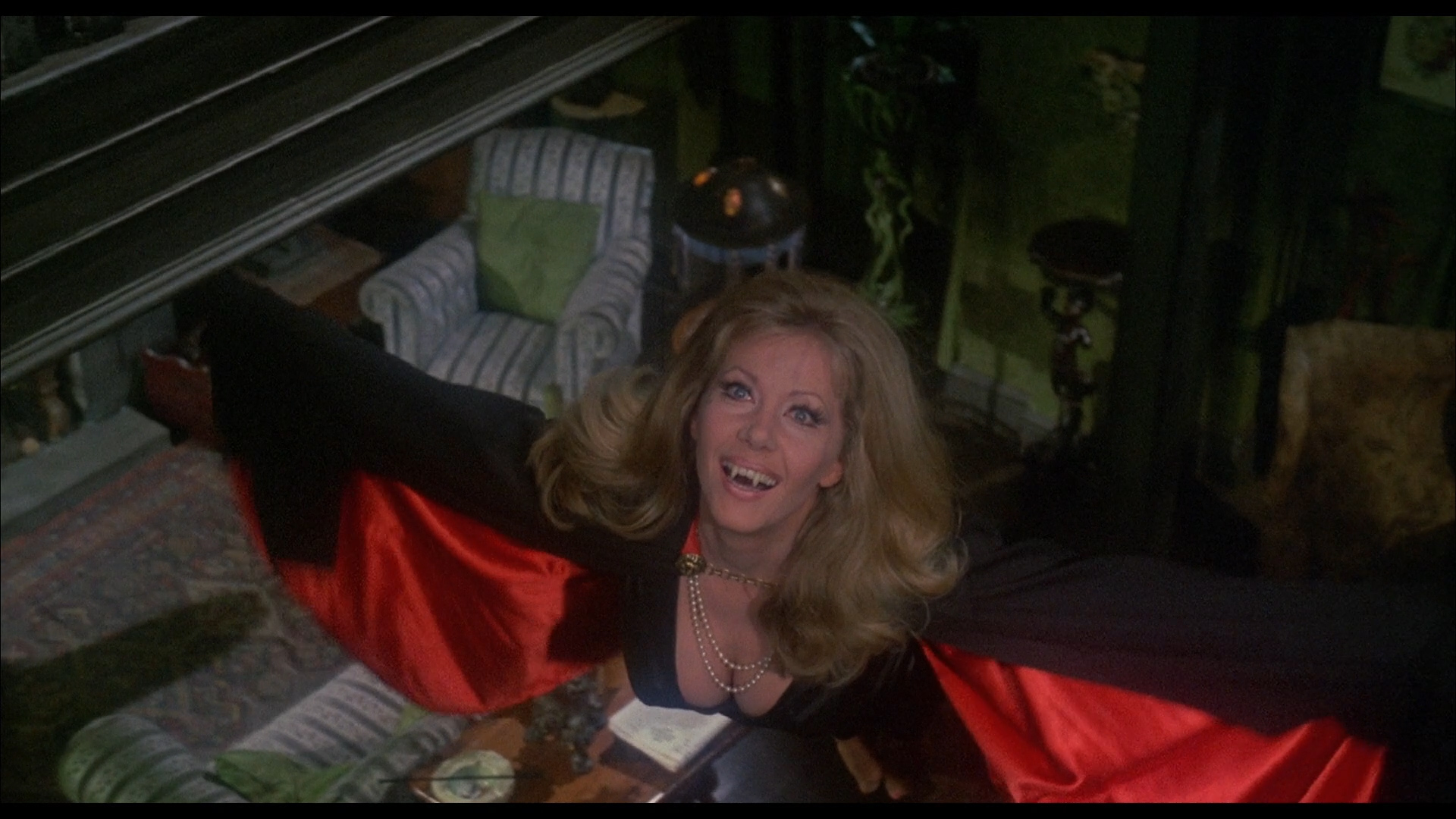