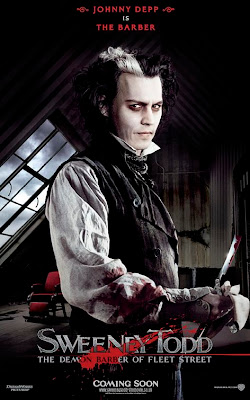 When I watch a film based on something from a different medium, I think it’s important to ask myself what the movie is doing differently from the other. In Sweeney Todd‘s case, the medium has shifted from stage to film; it seems similar enough on first glance, but instantly recognizable is the ability for director Tim Burton to create a more ominous, forbidding atmosphere. Burton jumps on it. For a director who has helped with such films as The Nightmare Before Christmas and Corpse Bride, films which turn simple children’s stories into nightmarish but moralistic fantasy, Sweeney Todd is the perfect musical/horror hybrid.

In fact, Burton’s brooding, angst-ridden Todd is perhaps Edward Scissorhands at his most depressive. This is in part due to Johnny Depp’s portrayal of the man; his crazy demeanor is welcomed here, although at times I felt distanced from Todd. In the end, I came to the conclusion that this was on purpose; Sweeney Todd is, for the most part, a mystery who we rarely see in full genuine clarity.

Burton heightens this sense of mystery by adding his touch of surrealistic qualities to the film. Animated effects take the audience out of the world’s reality. Deep, dark days drop off into even darker nights. The atmosphere is considerably heavy and dreary, something that builds the sense of dread throughout the film. It is this that gives the film version of Todd that difference from what one might see on stage, something that stuck out to me through much of the movie.

I’m not one for musicals, but the singing didn’t bother me; Depp’s voice is surprisingly good. The script was engaging enough, most of what kept me interested being the foreshadowing that we get throughout the film. The love story is also kept under raps – it doesn’t get out of hand, actually becoming only a minute part of the plot.

But we can’t talk about Sweeney Todd without discussing the violence. Are the bloodbaths necessary to the film’s plot? Yes and no. On the one hand, they help to provide a gauge of just how mentally broken Todd is. We come to see the violence Todd enacts as the closest we can get to the true Benjamin Barker. On the other hand, the throat fountains are too numerous and similar. We got the point, please move on.

If my thoughts seem unclear, it’s because they are. The above portion of the review has been me working through my thoughts of the film. I enjoyed it thoroughly, would watch it again, thought it was a good precursor to Halloween. But it’s difficult to point to exactly what parts I like. It’s like trying to dissect apple pie. But I know one thing that led to my satisfaction – the conclusion. The well-directed bloody end gets to the heart of the themes expressed in the film. Todd is driven by vengeance and blinded by blood (literally and figuratively speaking). His inability to recognize his own daughter, even referring to her as a man, and his murderous rampage which leads to his wife’s death, give a poignant reminder that Todd forgot what his vengeance was for.