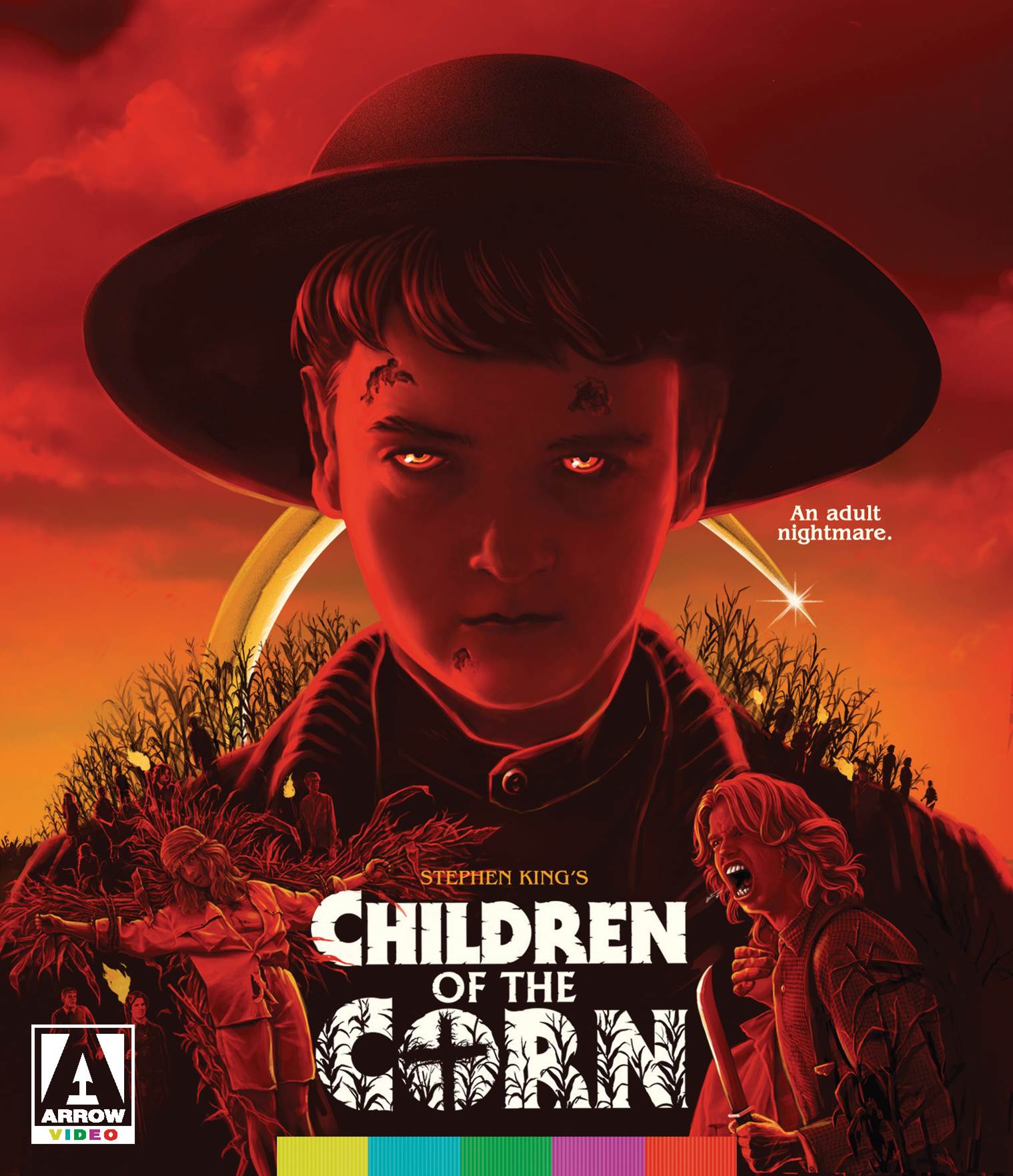 In the small town of Gatlin, children suddenly turn on their parents and kill them. The reason for this sudden case of patricide and matricide is the new preacher Isaac has told them He Who Walks Behind the Rows commands it. Three years later, a couple arrives in town after accidentally running over a child with a slit throat. The couple soon figures out that the kids are in control and all adults who enter must be sacrificed.

Full disclosure: Images are from the Anchor Blu-ray and not completely representative of the Arrow Video release.

Back in 1977, Stephen King wrote a short story about some kids who rise and murder their parents in a small country town. The reason they do this is that they believe He Who Walks Behind the Rows (rumour is ‘He’ is Randall Flagg!) is the one true God and anyone 19 and older must be sacrificed. In a way it’s a simple story, so to make the movie about it, they had to add in a lot more stuff. However, they didn’t just add in stuff, they also reworked pretty much the entire ending of the story, giving viewers a cliche effects-heavy conclusion.

For the most part, Children of the Corn does a wonderful job at adapting the short story. The film follows Burt and Vicky (Linda Hamilton playing the girl in distress with not much to do) as they get in an accident and head to the town of Gatlin. There they find the crazy children who are being led by a preacher named Isaac (John Franklin), who worships the god He Who Walks Behind the Rows. It doesn’t take long for the children to come after the pair, trying their hardest to hunt them down and sacrifice them. Heading up the squad is the weird Malachai (Courtney Gains in a great performance), who is starting to see flaws in Isaac’s leadership.

What I find fascinating about Children of the Corn is the fact that most of the movie takes place during the day. It’s hard to make a horror film scary during the day, but director Fritz Kiersch tries hard to do just that, but honestly, the film isn’t scary at all. However, the film is still lots of fun, and unintentionally funny at times. Seeing Burt struggle to get free of killer cornstalks was pretty hilarious.

The most prominent issue with Children of the Corn is the ending of the film. We get some terrible-looking effects that even back then had to be laughable. Also, the film decides not to grow a pair and gives the movie an ending vastly different than the short story, which is far more gritty.

Nevertheless, Children of the Corn provides some fun scenes that will entertain viewers. It also doesn’t completely butcher Stephen King’s work like some other adaptations of his usually do. It’s just a shame the ending was such a poorly put together shitfest.

A lot of the violence in Children of the Corn comes at the beginning of the film when the children attack and kill their parents and all the adults in Gatlin. People are poisoned, stabbed, throats slit and various other methods of death. The flick isn’t graphically bloody, but the opening is memorable for the violent acts.

There is zero sex and nudity in Children of the Corn. For that, you would need to watch Diddling in the Corn.

Children of the Corn has been released on Blu-ray before, with Anchor Bay releasing a 25th-anniversary edition back in 2009 and later on Image Entertainment released a version in 2011. Both releases had decent reviews, but nothing spectacular. This time around Arrow Video is taking a stab at a Blu-ray release, and for the most part, the 2K transfer is the best available. Although grain-heavy at times, especially during the night scenes, the clarity is perfectly acceptable.

Audio is offered in both DTS-HD Master Audio 5.1 and LPCM 2.0. I listened to the 2.0 option, as that was the defaulted selection and I had no issues. If I’m to watch it again, I will give the 5.1 version a shot as others have said that it does a serviceable job using all your speakers.

For the most part, extras on the Arrow Video release are ported-over supplements from the Anchor Bay release. There are a couple of new interviews with Julie Maddalena and John Philbin running a whopping 50-minutes. Also new is a tour of the Gatlin shooting locations, a new commentary with horror journalist Justin Beahm and Children of the Corn historian John Sullivan, and in my opinion the most interesting feature, a short 18-minute adaption of Children of the Corn that was shot a year before this film. It’s pretty faithful to the short story, but once again the ending is changed.