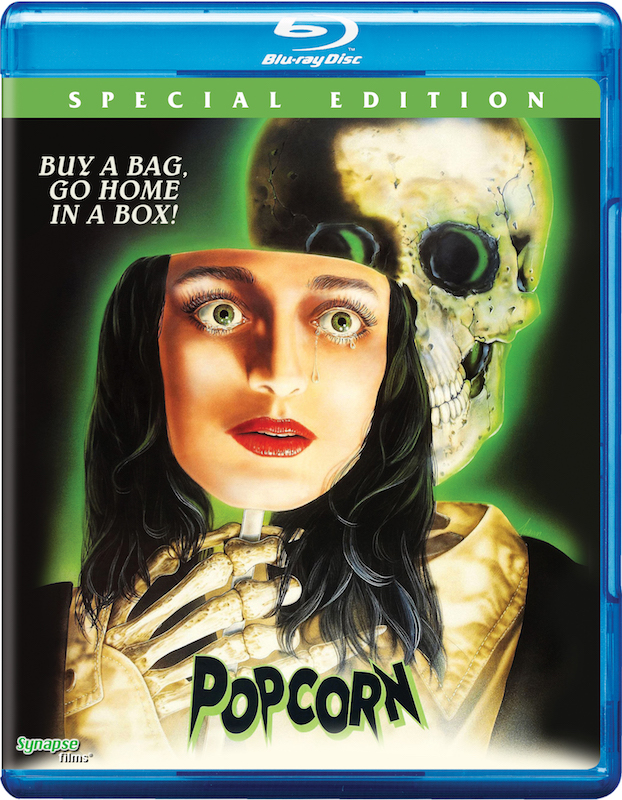 A bunch of college film students are planning a big horror movie marathon, but they didn’t count on a killer showing up to spoil the fun. As the madness and terribleness of the classic movies go on, the body count rises. That ain’t butter on your popcorn; its blood! (Wow, sorry, that was really cheesy.)

Colour me simply surprised that Popcorn is not an ’80s horror movie. I could have sworn that the flick was pure ’80s. I mean come on, we had the requisite musical montage, the stalking, the slashing and of course, the clothing. However, turns out Popcorn was released in 1991. I guess the ’80s was still bleeding over a bit during that period and we can be very thankful for that.

Popcorn is pretty much a treat for every horror fan of William Castle gimmick horror flicks. The premise of the marathon showcasing three older films (in actuality, films shot specifically for Popcorn) and having each one use a gimmick (3D, shocking seats, and gross-out smells) is a beautiful callback to those olden days of cinema. Wrapped around this premise is a killer on the loose who is out for revenge. Expect the inevitable plot twists and turns. Also, be prepared to be confused as to who lived and died in this film. I still am unsure on one or two characters and whether they are alive or not.

There is fun to be had with nearly everything in Popcorn. There are some inventive kills, gnarly special effects, a super fun atmosphere and excellent music. The flick is certainly cheesy, but it’s a flavour-rich cheese that goes great with your popcorn.

Popcorn features some fun kills, although they aren’t overly gory. There is blood here and there, but for the most part, it’s tame.

There is no sex or nudity to be had in this one. We do get to gawk at Freddie Marie Simpson dancing all sexy-like. Dee Wallace Stone also has some righteous mom hair that revs my engine up.

Synapse Films originally released Popcorn in an exclusive limited edition steelbook and this release is the same as that one but in a standard Blu-ray case with regular artwork. The film is presented with a brand-new 2K scan of a 35mm Interpositive Vault Element. It looks fantastic, with plenty of detail.

There are two audio options available to choose from; an all-new Blu-ray 7.1 Surround Sound Mix supervised by Synapse Films (Original 2.0 Stereo Mix also included). I listened to the new 7.1 mix and was pleased with the results. That musical montage really shines.

As for the special features, we have a nearly 56-minute Making Of that provides plenty of interviews with cast and crew. They go into great detail about the recasting of actress Amy O’Neill, who was replaced by Jill Schoelen. They also talk about the change of directors and the guidance of Bob Clark on set, be it both good and bad. Also included is a fun interview with Bruce Glover, father of Crispin Glover. Bruce plays a lead in one of the films shown during the marathon. Rounding out the features is a trailer, still gallery and booklet.