The House by the Cemetery Blu-ray Review (Blue Underground) 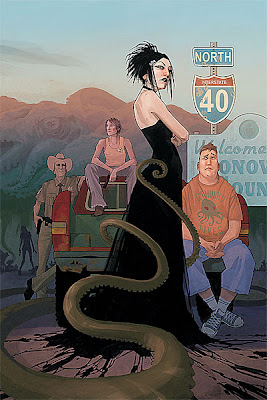 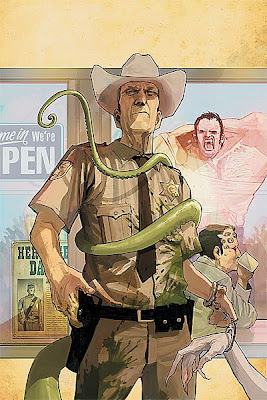 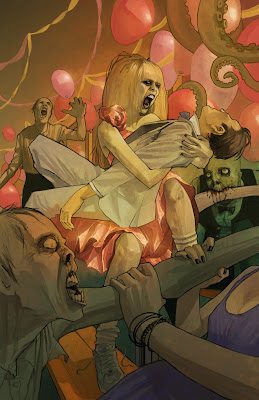 Ah, Conover County – a nice little western group of towns populated by farms, saloons, and a host of “colorful” characters. Now make that a place with all of those things plus monsters, and lots of ’em. Two slightly misunderstood individuals opened up a book slightly resembling the Necronomicon, and literally all Hell broke loose. So Conover is now overrun with demonic citizens, all with their own amazing, or grotesque, talents.

North 40 is a rush right from the first issue. Rather than let us get to know any recurring characters, we are immediately introduced to Conover as a county under destruction. I love how Aaron Williams’ writing style jumps from character to character without worrying whether the audience is following or not; the comic just assumes we will trust the author to take us where we need to be. Throughout the first three issues, the reader is actually not too sure who the protagonist is – we know we have a good-natured sheriff, a strong teenage boy, and a girl who can speak to a mysterious oracle, but it’s not obvious as to what roles they play or if they’ll even become regular characters. Instead of being a flaw, this is a huge success; the mystery of what’s going on in Conover County is something that keeps the reader interested rather than frustrated at missing out on the “secret.”

But even though there are few evident major characters, there are a ton of minor characters that all have unique demonic characteristics, plus original body structures from artist Fiona Staples. We’ve got evil rednecks, girls who see through the eyes of animals, zombies, giant robots, gargoyle-like men, and even tentacle-limbed creatures like that of Cthulhu (which we’ll get to in a second). The imagination that has gone into both writing and drawing these creative creatures is astounding. You’d think that all of the monsters wouldn’t mesh together in the same story; in that respect, you’d be wrong. The county is overrun, and it makes the tension so much higher because almost everything has been turned into some sort of mutated entity. Not all of the monsters are evil – but many are, and there’s always a threat looming. The variety of monsters also makes the comic ferociously entertaining; there are so many different paths the comic could take that it puts even more suspense into the story.

Williams definitely seems to be influenced by the writings of Lovecraft; even the first issue features a boy with a Cthulhu shirt on the cover. One can draw many parallels between North 40 and Lovecraft’s stories: small, mysterious towns, fantastical monsters, tentacled beings, a dark god… The list can go on and on. It is a great homage to Lovecraft’s writing, and does so much right that one must admire the storytelling Williams does.

North 40 is shaping up to be a ridiculously good comic, and a real gem in horror literature in general. The artwork is violent, bloody fun, and the story has its share of comedy and thrills that keep the reader fully engaged. Plus, it expects the reader’s full attention, rarely resorting to pure mindless exposition. It’s hard to say where North 40 will go next, which is what is so inviting about the plot. A highly recommended read that is sure to leave you thirsting for more. I know I am; bring on issue 4!

Liked it? Take a second to support Cultsploitation on Patreon!