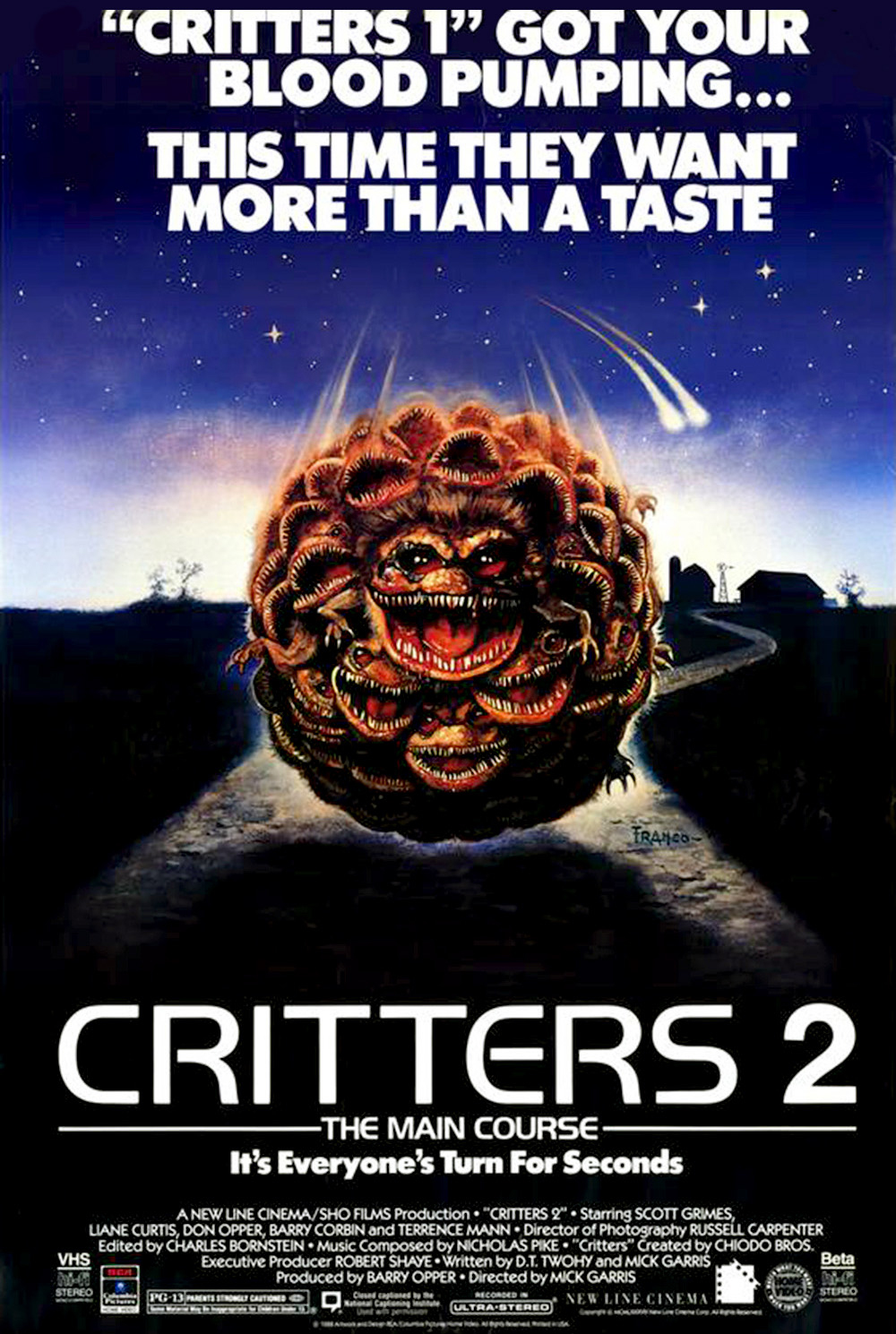 The Crites are back – or rather, they never left. Some unhatched eggs from the previous critter outbreak in Grover’s Bend have accidentally been used as Easter eggs, and now they’re causing mischief all over town. Luckily, Brad is back in town visiting his grandmother and he’s able to call the outer space bounty hunters Ug, Lee, and Charlie to help eliminate the pests on Earth for good. But it won’t be as easy since these critters aren’t sequestered to one area anymore.

Listen to Blood and Black Rum Podcast’s episode on the film.

The original Critters was a lovable hit from Stephen Herek, a venture into familiar territory – like its brethren Gremlins – while also maintaining a unique science fiction element that elevated it to a creative level. While Herek doesn’t return for Critters 2 (four years after the first film), the idea is in good hands – Mick Garris directs this sequel with love and devotion to the intents of both Herek and original screenwriter Domonic Muir, bringing back most of the same actors and characters as well as the small-town setting. In essence, Critters 2 is nearly a remake of the first film, but it increases the stakes a bit and bolsters the comedy for a great horror-comedy buffet – and it’s one of very few Easter-themed horror films.

The movie follows Brad Brown (Scott Grimes), the child protagonist from the first film, as he makes his way back to the town of Grover’s Bend. He’s been run out thanks to the whole town’s mockery of his space alien story, but he’s visiting his grandmother for Easter weekend. Garris immediately establishes the homey atmosphere of Grover’s Brend with town shots and a quick introduction to the quirky people who live there, including Megan (Liane Curtis) and her dad. Sal (Lin Shaye) makes a return here too for a quick cameo, and Harv – the town sheriff from the first film – makes a reappareance to help out with a new critter infestation. It’s immediately clear that Critters 2 is attempting to expand on the original by increasing the square acreage of the new critters’ attacks; instead of a small farmhouse, the Crites are expanding to annihilate all of Grover’s Bend.

The science fiction element also returns with the intergalactic shape-shifting bounty hunters, which gives Garris a lot of room to play with the comedy of being able to transform bodies as the bounty hunters see fit. There are a couple of funny changes and one that significantly twists the plotting, used to great effect. The shapeshifters provide a lot of the comedy, especially thanks to Roxanne Kernohan’s appearance in a BDSM-styled outfit – she’s definitely the eye candy for this film despite its PG-13 rating.

It’s often overtly silly, too, with the critters becoming a source for violent comic relief rather than a full-fledged alien threat. Garris isn’t afraid to treat the Crites as the pests they’re considered to be in the film’s world, showing them receiving all sorts of abuse: blasted into walls, crushed under shoes, or boiled alive in oil, there’s no end to the comic karmic cruelty they receive. Likewise, the townspeople aren’t immune to the Crites’ bites, either; a particularly brutal scene involves a rolling critter ball paving over a man, leaving him bloodily eaten alive.

But there’s heart to Critters 2 that takes center stage at the end of the film. The town, somewhat divided at the start of the film, is forced to come together – albeit in torch-and-pitchfork mob fashion – to help protect each other against the Crite invasion, and at the end of the film they’re left closer than ever before despite the amount of destruction caused. And Garris can’t help but toy with the viewers’ ‘shipping of Megan and Brad, either – there are about 4 near-miss kiss moments within the film before they finally get their smooch on.

While Critters 2 could have been a massive flop given the change in leadership from the first film, Garris is able to re-capture the same elements that made Critters so entertaining while adding new elements and going a bit bigger. That’s exactly what viewers should expect in a horror sequel like this, and Critters 2 is insanely enjoyable, from its humor to its tongue-in-cheek horror references. The film is a feast of fun moments, perfect for a relaxing Easter holiday – especially if you want to drive out your religious relatives.

Critters 2 has a surprisingly high level of violence, although most of it is cartoonishly portrayed. The special effects work is quite good here and features a lot of human and Crite carnage; one of my favorite moments has to be the boiled-alive Crite, who looks like a de-furred Furby. Though the violence is obviously exaggerated, it adds an extra layer of gooey fun to the film.

Despite Critters 2 getting a PG-13 rating, it features an almost entirely nude Roxanne Kernohan; eventually she puts on a skimpy bounty hunter outfit, but that doesn’t hide the cleavage. Definitely a welcome addition to the film.