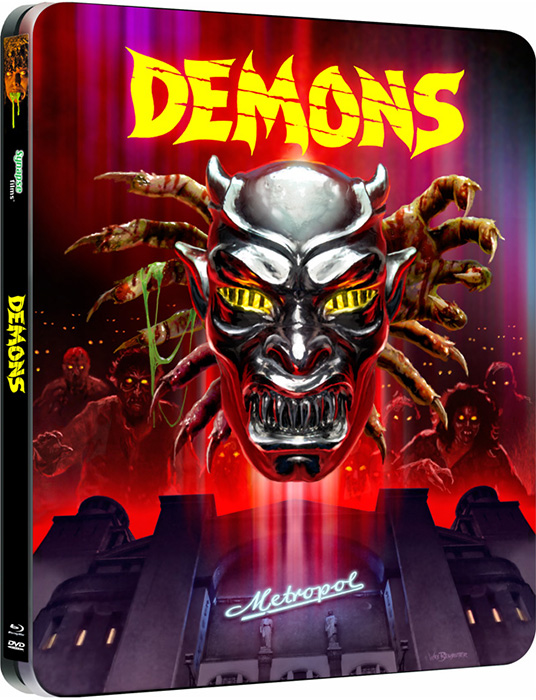 For one night only at a beautiful gothic theatre, a movie has been selected to screen before an audience of random character types. Unbeknownst to them, the movie, or maybe the metal mask in the lobby, cause demons to come forth from somewhere to wreck havoc and rip apart the patrons. Honestly, it’s actually quite unclear what causes demons to come forth, but the hell with it. Let’s have some fun!

It’s been forever since I’ve seen Lamberto Bava’s 1985 cult hit Demons and thanks to Synapse and their fantastic Blu-ray release, we can finally see it in beautiful HD glory. Mmmm, Fabiola Toledo in HD.

Demons is the type of film that excels at special effects and gore but is filled to the brim with some ludicrous and hilarious scenes. It has one of the most amazing soundtracks, with Claudio Simonetti of Goblin fame cranking out some sweet tunes. Combine the ear pleasing tunes with Dario Argento being credited as one of the screenwriters, and you have a film that screams Cult Classic!

The first time I ever saw Demons was on VHS (the lovely clamshell release by Anchor Bay), and I remember thinking, wow this movie has some gnarly special effects and gore, but man the voice dubbing is awful. Has it changed at all on Blu-ray? Well, technically yes it has changed, as they’ve included the original Italian dub, but that oh so hilarious English dub is still included.

I mentioned above that there are ludicrous scenes and most of those take place near the end when one of the main characters hopes on a dirt bike and drives around swinging a samurai sword, while heavy metal music blares through your speakers. Yes, ludicrous, but my god if you don’t get a boner from it, you better check your pulse… unless you’re a girl and if do you have a boner, you might want to check in with a doctor.

Outlandish scenes are what makes Demons the quirky cult hit it so rightfully deserves. It doesn’t waste time trying to explain the demon outbreak, it instead gets right immediately into the good stuff and pumps out minute after minute of gory mayhem. Hell, this movie is so fast paced the ending literally jumps out at you, and before you can catch your breath, the credits are rolling.

Lamberto Bava eventually went on to direct a sequel to Demons, appropriately titled Demons 2. It doesn’t quite live up to the glory of the first film, but it does up the ante in overall cheesiness.

If you take anything away from my ramblings above, it’s that Demons is a film that has incredible practical effects, an abundance of gore, a phenomenal soundtrack and a guy riding a dirt bike and slashing up demons with a samurai sword. I’m pretty sure I don’t need to tell you to buy this Blu-ray because look what’s in your hands. That’s right! You’ve already bought it. That’s how awesome this movie is.

Demons is loaded with graphic violence. People are slashed, torn apart, and body parts are flying everywhere. Demons is a violent film, and I love it that much more because of it.

The most notable scene is the “birthing” scene that takes place later on in the flick. I won’t spoil it, but damn it was incredible.

Demons may be heavy on the gore, but it’s light on the sex and nudity. We do get a close-up shot of a woman’s nipple and some through the clothes grinding. I’m definitely not going to run home and tell my mother about it.