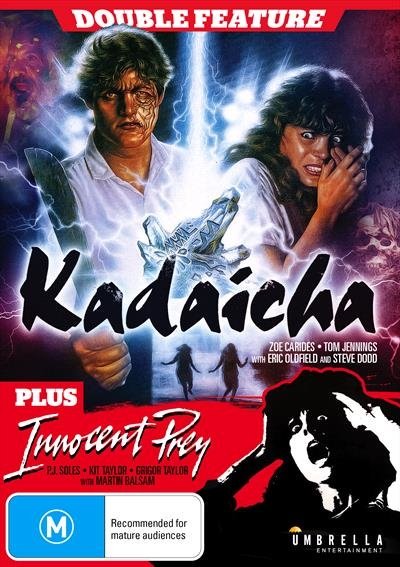 It’s probably best not to build a housing development over an ancient aboriginal burial ground, but that’s just what Gail’s father has done – and it results in the Kadaicha Man coming to each of the town’s children at night and bringing them a death crystal. Eventually, they’re killed off one by one, with Gail the only teenager who can potentially stop the massacre.
AKA: Stones of Death
Director: James Bogle
Actors: Zoe Carides, Tom Jennings, Eric Oldfield, Deborah Kennedy
Genre: Horror
Year of Release: 1988/2017 (DVD)

Cathy Wills is a very unlucky lady who seemingly finds trouble at every junction in her life; she marries Joe, who actually turns out to be a prostitute-murdering madman who gets carted off to prison, escapes, and then follows her to Australia. However, there’s also a voyeur who has his eyes set on Cathy as well; will she ever be free of crazy people wanting to kill her?

Also known as Stones of Death for good reason, Kadaicha is an Ozploitation film that really capitalizes on its audience knowing Australian history. If that’s not your forte, though (and I’ll assure you that it is not within my wheelhouse), then the film is more easily summed up to American audiences as follows: “You but you left the bodies!”

Yes, Kadaicha is very much like Poltergeist in that it centers around a town plagued with mysterious animal-linked deaths after Gail’s (Zoe Carides) father (Eric Oldfield) builds a housing development overtop of an aboriginal burial ground. That’s where the history comes in – like America, Australia was also created by destroying the habitat of native tribes, and so non-Aussie viewers can also relate to this set of circumstances. However, director James Bogle works in one other influence – the Kadaicha Man, the aboriginal mystic tasked with protecting this spiritual land, comes to the teenagers of the town in their dreams and leaves a special death crystal by their bed.

In a lot of ways, this slasher – or is it, considering most of the deaths occur via animal attacks? – is reminiscent of Wes Craven’s A Nightmare on Elm Street. That combination of Poltergeist-meets-ANOES works, albeit not as well as those two films seperately; Bogles direction is a bit too loose, and the animal attacks aren’t as thrilling as other Ozploitation works. However, the film can be downright fun at times, especially during a crazy eel attack or a spider eye-gouging. While the reason for its obscurity is obvious, Kadaicha will still attract seasoned horror viewers who haven’t experienced it yet.

After his success with Long Weekend, director Colin Eggleston went on to direct Innocent Prey, a take on the psycho slasher genre popular during the early-to-mid ’80s; unfortunately, the film wouldn’t find a release until 1991, which certainly did it no favors considering it was partially banking on PJ Soles’ recent successes in film.

However, revisiting Innocent Prey reveals the film’s strengths despite some flawed marketing tactics. The script, co-written by Eggleston and Ron McLean, delivers a number of surprising moments, from the film’s early killer reveal (played by the menacingly simple Kit Taylor) and the plot’s eventual morphing throughout. While the murderer is known early on, the story keeps the viewer guessing as to exactly where its headed once protagonist Cathy (Soles) leaves Dallas for the beautiful Australian coast, and Eggleston sets in motion a series of events that show Cathy has the worst luck ever (or maybe just a bad taste in men).

While Innocent Prey is a little too easy to predict in its final moments, the film does a good job of balancing tension with Soles’ attempt at a more “normal” character than the ones she usually plays. The film has few violent moments, but they’re often brutal in their quiet portrayal, and fans of serial slashers will find a lot to like here.

There’s nothing in Kadaicha besides a quick shot of nipples within a see-through nightgown. Innocent Prey features the fabulous Deborah Voorhees (in a role before Friday the 13th: A New Beginning) showing herself in all her glory as the prostitute that starts the whole film rolling; Kit Taylor also bares just about all, including a very slight shot of testicles and nearly his entire butthole. (Who says we don’t document all the nudity?)

No one is going to be too thrilled with the image quality for Kadaicha and Innocent Prey; both were ripped from a shall we say problematic source – Kadaicha from U-matic and Innocent Prey from 3/4″ – and the quality suffers for it. However, I don’t doubt it’s the best source that Umbrella Entertainment had. Still, Kadaicha‘s picture is quite a bit worse than Innocent Prey, with a lot of skips and tracking flaws towards the end of the film. While it’s far from the worst thing I’ve seen put to disc, it’s certainly not quality that most people will be expecting despite Umbrella’s warnings on the package.

The films are presented in Dolby Digital 2.0 stereo and sound fine overall, with no muffled dialogue or music. While neither of these features will be particularly impressive in terms of audio content, there’s nothing wrong with the tracks. One issue of note is that neither film comes with an English subtitle track, something I wish Umbrella would have included.

Two flawed trailers are included on this disc, but notably extras are absent for the release’s main attraction Kadaicha. Instead, a new 20-minute interview with PJ Soles is included, which is a particularly interesting watch and well put-together – they include a card with the question on it before Soles answers.

While neither of these films will attract most casual viewers, fans of horror should certainly check out this DVD release of two obscure Australian horror films. Even if the picture isn’t great, these movies are worth at least one watch.

Correction: A previous review of this release stated that the films were sourced from VHS. The correct sources – U-matic for Kadaicha, 3/4″ for Innocent Prey – have been added.