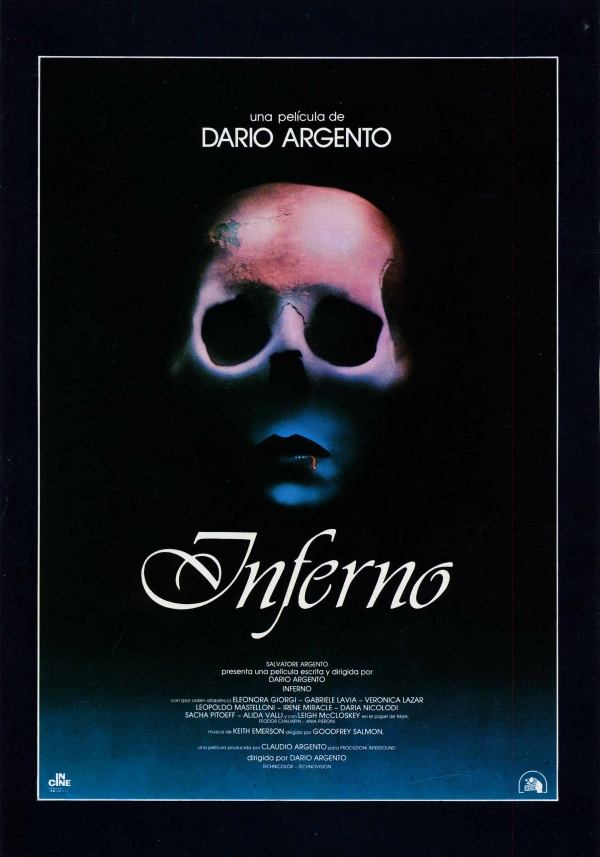 Rose realizes that her apartment building seems to be built as one of the three architectural areas designed to house witches known as Mothers – in this case, Mother Tenebrarum. After reading Varelli’s book on the three Mothers, she finds herself in trouble and contacts her brother Mark to come to New York to her rescue. Unluckily it’s too late for Rose, but Mark does make the journey, finding himself embroiled in various murders and eventually encountering Mother Tenebrarum herself.

The circumstances behind Dario Argento’s Inferno – his pseudo-sequel to Suspiria – were not ideal. The film was not marketed for wide theatrical release, critics did not receive it well, and Argento was ill while making the film. And following up a film like Suspiria is no easy matter anyway, no matter how excellent the script and production (with both Mario Bava and Lamberto Bava on set).

Despite getting no writing credits, Daria Nicolodi reportedly wrote the original story for Inferno which Argento adapted to film; and Nicolodi had a large hand in creating the idea for Suspiria too. The relation to Argento’s previous opus is clear from the beginning of the film, sharing certain stylistic developments: an emphasis on blue and red colors, the use of a strange and foreboding building, the presence of torrential downpours, and a taxi cab ride all help to teleport the viewer into the fairy tale world of the Three Mothers. And Argento’s script further defines the world of these Mothers, something that was intentionally left out of Suspiria; a helpful narrative tells the viewer about the architect Varelli, his book, and the trio of women who control various powers.

But these elements are really the only thing close to capturing the essence of Suspiria, and Inferno often struggles to figure out exactly how it wants to stand apart from that film while also locking into the same themes and aura. Argento’s film is poorly paced, and part of that is due to the disjointed nature of the plot – it jumps quite literally from destination to destination, first in New York, then back to Rome, before centering on the NY building that Mater Tenebrarum calls home. Its plotting is confusing, but its worst flaw is Argento’s plodding direction, slowing even tense moments down to a crawl. His efforts to elongate scenes for tension actually wind up making them more tedious than anything else, featuring operatic death sprawls or laborious tracking shots.

It’s interesting, too, because Inferno is technically just a bunch of murders and stalking scenes strung together, from the opening moments when Rose finds herself pursued to Sara’s death – including eventually almost everyone else that lives in the apartment building. One would think this recipe ripe for Argento’s giallo experience, and in some ways Inferno does excel at beautiful set pieces (Rose’s gruesome guillotine murder); however, more often it simply seems confused with its own overarching narrative.

Inferno doesn’t have much of a story, actually, and the mystery it does feature feels kind of silly. There’s a riddle about a secret key hidden right beneath the characters’ feet, which pretty much immediately signals to the viewer that it’s underneath the floor. Yet it takes Inferno – and specifically Mark – the entire film to figure out the mystery, and from there the plot trails off.

It also doesn’t help that this film’s architectural layout is poorly developed by Argento, leading to confusing reveals, basements with flooded basements underneath them, and all sorts of hidden hallways. It just doesn’t have the finesse of Suspiria revealing its secret areas, and often these elements come out of nowhere.

That’s a good way to summarize Inferno, though: often things happen just because it would be an interesting element to see in this horror film. While Argento does incorporate some excellent color, jarring camera angles, and an underrated soundtrack from Keith Emerson taking over Goblin duties, Inferno never really sparks a conflagration like Suspiria before it. But at least it’s not Mother of Tears, am I right?

While Inferno has some elongated death sequences, it’s not exactly gory. Its most brutal killing is definitely Rose’s guillotine death, which does look pretty great. The technicolor blood does make a comeback too, to great results.

Irene Miracle gives us an eyeful with her wet white blouse early in the film after going for an ill-advised swim under her apartment complex. Other than that, not much else.