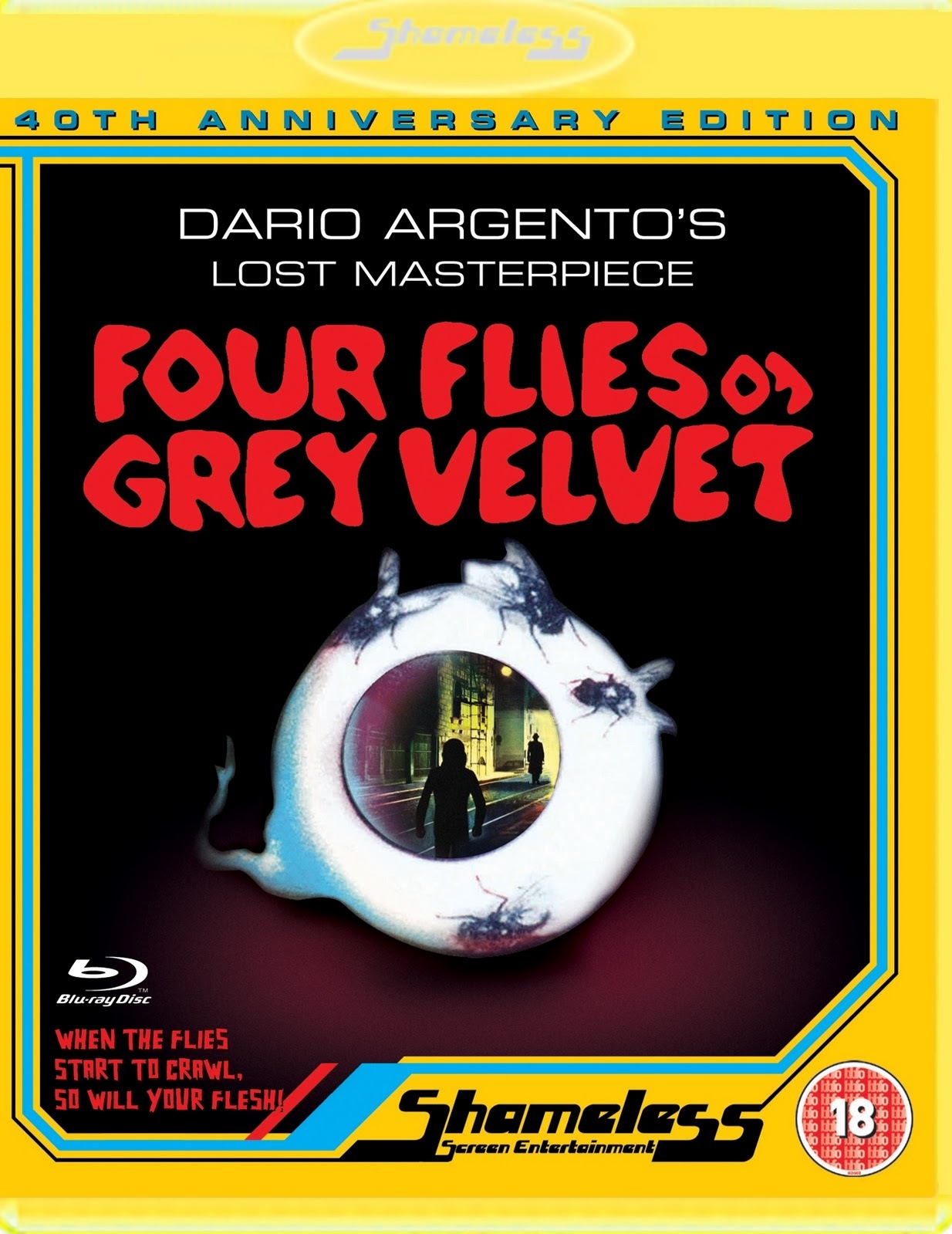 Roberto Tobias (Michael Brandon) is being stalked by a masked killer, and he has no idea who could be behind the mask. Between being messed with by the stalker, Roberto finds time to get busy with his wife’s cousin. Hey, when your wife’s cousin looks like Francine Racette, you gotta do what you gotta do.

As we continue our week of looking at Dario Argento films, I find myself watching his third piece of work titled Four Flies on Grey Velvet. Released the same year as The Cat o’ Nine Tails, Four Flies was meant to be Argento’s swan song in the Giallo genre, having released the aforementioned The Cat o’ Nine Tails and the highly enjoyable The Bird with the Crystal Plumage previously. That all changed when Argento’s film The Five Days bombed at the box office, making Argento see the light and return with the hit film Deep Red, putting him back on track to make some more Giallos.

As for Four Flies on Grey Velvet, Argento does what he does best by making a murder mystery with all sorts of flair and style. It’s yet another film where the viewer will be left in the dark until the big reveal. You might be able to guess who is doing the stalking/killing, but there are enough red herrings to keep you on the edge of your seat, waiting for the fiery conclusion.

Unfortunately, some of those red herrings lead down a dead-end path. Some characters never end up being important, but only placed on the screen to keep the viewer confused. This is even more apparent near the end of the movie, where all sorts of people show up in random scenes, scenes that are never explained.

Typically when discussing Dario Argento, editing issues isn’t something that usually comes up; however, with Four Flies, there are some rather strange choices made in the editing room. It’s hard to explain, but one scene, in particular, involving a sex scene in a bathtub, has the scenes hard cutting, with camera angles bouncing from close up to far away. It’s all somewhat jarring. That isn’t the only time it happens either.

Another odd choice that Argento makes is the use of humour early on in the flick. Strange musical cues (Ennio Morricone provides the score, which is enjoyable) and quirky characters providing some dumb slapstick moments bring the viewer out of the film. I would rather Argento skip the humour and stick with the dread, gloom and doom, which thankfully is how most of the movie plays out.

The humour put me off at first, which worried me, but thankfully the film rights the wrongs and gets down to providing an enjoyable Giallo. Four Flies on Grey Velvet might not be the most well known Argento film, but there is a lot of good to be had, and fans will want to check it out.

The violence in Four Flies is your typical Giallo, with lots of stabbing and bludgeoning. One murder scene, in particular, stands out thanks to some stylistic camera work. I won’t spoil it, but I think if you watch the film you’ll know exactly what I’m talking about.

Francine Racette provides all the nudity in Four Flies, with a steamy bath scene. She gets down and dirty, and I thank her for that. Mimsy Farmer also wears a slightly see-through shirt with no bra. Fans of male nudity are yet again left out in the cold.

To celebrate the 40th anniversary of Four Flies, Shameless Screen Entertainment released the film on Blu-ray in 2012 (umm, that’s 41 years, but anyway) and the result is mainly okay. The film wasn’t readily available to watch until 2009, and the quality has never been great, so you have to understand that this film isn’t going to be reference material. Still, the quality is all over the place. Sometimes it looks great, but other times there are compression issues, blocking and crushed blacks. It isn’t always pretty, but the film, for the most part, looks better than it probably ever did before. (Eventually, other companies like Cecchi Gori Home Video have released the movie on Blu-ray, and the quality has improved.)

Audio also takes some hits. The film’s dialogue is low at times, and near the end of the film, the English dialogue switches over to Italian and there is a lot of distortion. One scene involving a car crash will quite possibly blow up your speakers if you don’t lower the volume beforehand. The distortion was insane. Subtitles have been provided for the Italian track, but if you try to watch the English track with subtitles, be prepared to have a completely different story told to you, as the dialogue doesn’t always match the subtitles. (Fun note, the caption for the film title at the beginning lists the title incorrectly as Four Flies in Grey Velvet. Now that is a film I want to see.)

The main feature on the Blu-ray disc is the interview with Writer & Assistant Director Luigi Cozzi. He provides plenty of information, and the feature runs 42 minutes long. Also offered are some trailers, photo gallery and alternate credits.