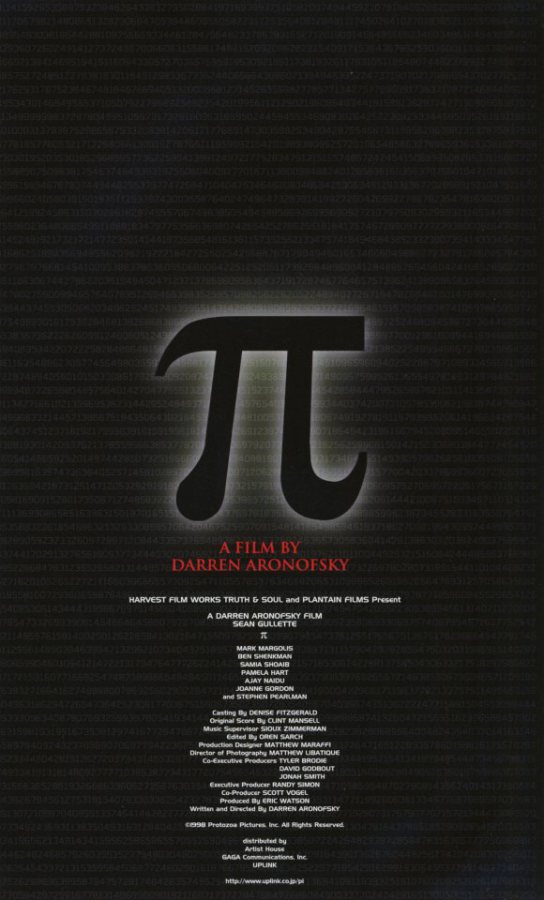 Max Cohen’s kind of a weird dude, a real ‘troubled genius’ type – he’s a brilliant computer engineer, a gifted mathematician, and also apparently something of a home chemistry enthusiast. Plus, he’s sort of a shut-in. To put all that less delicately: Max is a paranoid, egomaniacal drug addict dead-set on using his apparently somewhat mystical math skills to predict the stock market.

Unfortunately for him, the awful, surreal world he lives in has way stranger plans for him than some boring mess like that. Instead, our protagonist Max finds himself being blackmailed by a shady government organization and joining a weird cult of Jewish math wizards.

Darren Aronofsky’s directorial debut is pretty crazy. Is it a little pretentious? Yeah, hell yeah, it’s super pretentious. But it’s also great: it’s disorienting, confusing, unique and thought-provoking. It’s also an uptown ass-kicking of a midnight movie. Shot in aggressive, high-contrast black and white, Pi is a frenetic odyssey reminiscent of other hard to understand art-horrors like Begotten, Eraserhead, Tetsuo The Iron Man, and A Field In England.

Like most stuff worth watching, Pi isn’t gonna be everyone’s cup of tea. It’s not that it’s sexually explicit, it’s not all that violent, it’s just that it’s super fuckin’ strange. Accessible yes, but extremely odd. You could even call it abrasive. Plus the soundtrack is, uh, terribly bad. Almost every frame is shot from some dizzying angle or awkward, claustrophobic close-ups. It’s hard to watch, in the sense that it kinda hurts your eyes.

Darren Aronofsky is known for making movies that hipsters literally physically cannot stop calling ‘haunting’ and ‘beautiful’ but that often actually are moving, memorable, gorgeous and virtuosic. The Wrestler, Black Swan, and Requiem For A Dream are all, more-or-less, haunting and beautiful films.

Not so with Pi. Pi is harsh, mean, ugly and weird. I say that with love. It’s a triumph, but this movie doesn’t really seem like it wants love. It just wants to do math and drugs and be left alone. This film is what it would look like if you split open some poor, speed-addled math major and took a good look at his soul. Especially if that interrupted his free time.

Adding to the strange, difficult violence of Pi‘s aesthetic is its soundtrack. It’s what you might call “atrocious,” and I don’t think Aronofsky meant it to be. Hollow, late-90s breakcore like a cheap ripoff of the Matrix score blares over blinding montages of Max Cohen’s desperate search for meaning in randomness. A search conducted mostly by taking strange drugs and doing intense computer stuff. It’s super jarring and totally out-of-place, and easily the worst aspect of the whole experience.

But, if you get over how grating Pi can be to your senses (and sensibilities) it’s really something fantastic. Pi is delightfully, artfully horrible. As a movie, and as art, it may not appeal to many, or even most. However, for people who enjoy getting high as balls and reading about quantum physics at 2 in the morning and listening to Massive Attack, this should be a new favorite.

There’s not much violence. Well, our boy Max gets roughed up by government spooks a couple times, some tough inner-city Hasidic Jews work him over a little bit, and there’s a tense part with a drill. Overall even the whole movie at once doesn’t measure up to that one scene in Requiem For A Dream. Now, Pi is rated R and it deserves that because it’s weird as all hell and totally fucked up. It’s just not rated R for sex and violence.

There’s no nudity to speak of, and very little sex. One scene depicts a drug-induced psychotic episode, overlaid by sounds of a couple (really, really) enjoying some good, loud fuckin’ but beyond that the sexuality in this film is really minuscule.