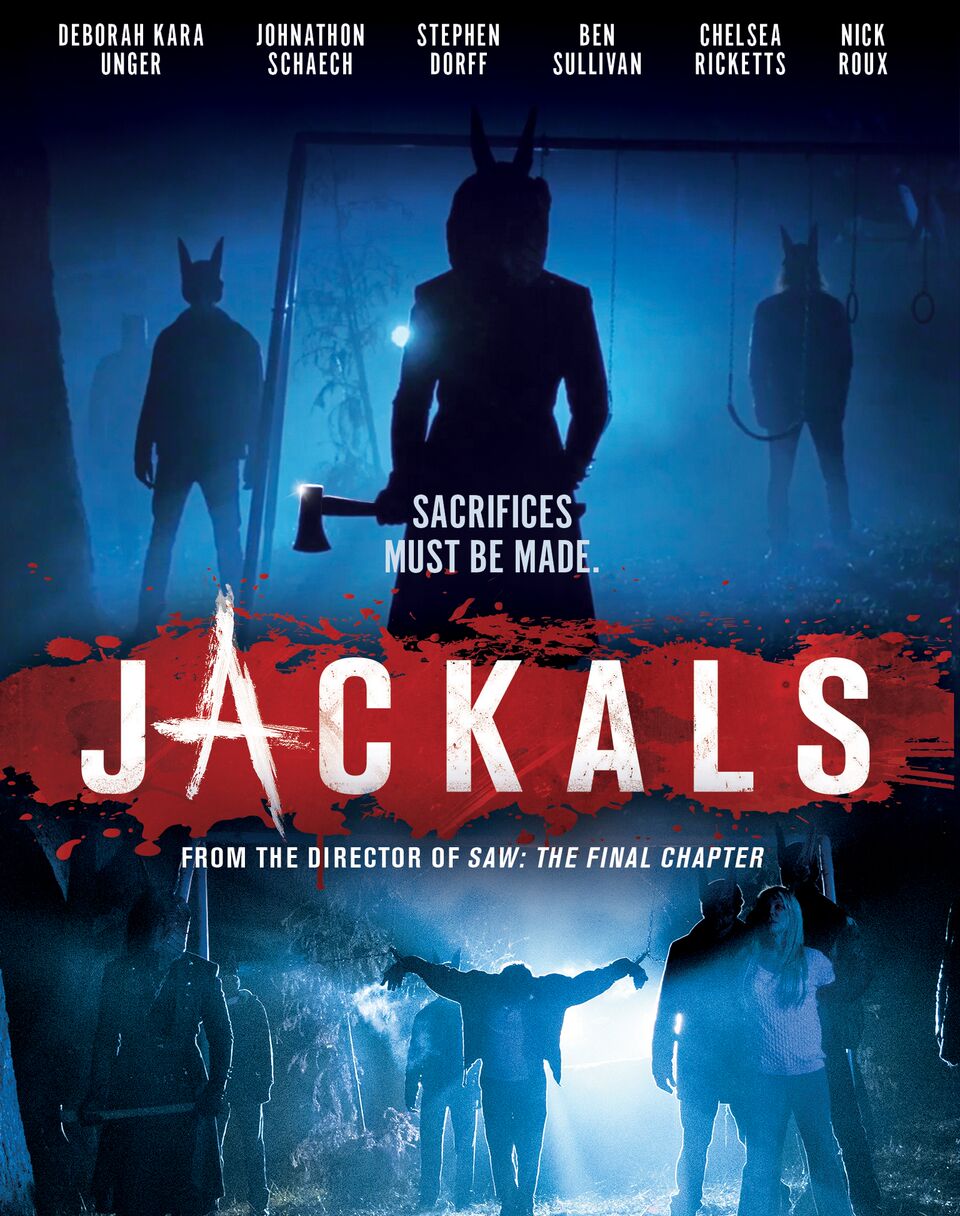 Justin’s been into some bad stuff. Cult stuff – something we here at Cultsploitation know a lot about. His family is worried about him, so they’re trying to break him from his indoctrination by kidnapping him and bringing him to a cabin in the woods – always a good idea. They’ve enlisted the help of a special psychologist and they want their normal Justin back – even though he’s unwilling to recognize them as his family or even care for his girlfriend and his baby girl he just found out about.

However, his cult members have followed Justin to the cabin, and they’re not very happy that his family are trying to take him back. They don their jackal masks and begin to torment everyone, except they’re just playing a game: they really want Justin to escape on his own and prove himself. Will he break free? Will anyone make it? Will anyone care?

Kevin Greutert hasn’t had an easy time in the horror genre. Though he’s worked on a number of films as editor and producer, his work in the director’s chair hasn’t gone over that well. He picked up the helm for the Saw series to finish things off with The Final Chapter when presumably no one else would, and he went on to the lukewarmly-received Visions and Jessabelle. But Greutert returns to directing with Jackals, derived from a script that was basically dusted off after years of shelving (originally written in 2006). That age is profound too, considering the film’s home invasion storyline would have predated more reknowned movies in the genre like The Strangers.

Alas, Jackals hits at a time when home invasion pieces have overstayed their welcome; films like You’re Next have already been around to provide metacommentary about the style, and in truth this reviewer has come to find that most pale in comparison to the esteemed Michael Haneke film Funny Games. Despite the familiar ideas, though, Jackals at least features a surprising premise: a family kidnapping their own son to break him from cult indoctrination.

While that adds an additional element to the film, it eventually becomes a tiresome escapade: it’s clear that Justin (Ben Sullivan) isn’t going to break, and once the Jackal cult eventually comes on the scene and starts a murderous rampage, there’s really no reason why this family should risk their lives to help a son who has lost all value for human life. The script continually tries to reason with audiences who are probably shouting, “Just get out of there!”, but ultimately Jackals offers a very unconvincing explanation for their tenacity.

It doesn’t help that the Powells are dumb and poorly characterized, given lines like “I should have been there for him during the divorce” to help the viewer understand what must have caused Justin to swing from normal person to killer lunatic. While the opening act attempts to convey some development for the family, it all comes off as posturing exposition and detracts from the film’s suspenseful deliveries.

Greutert at least knows how to direct some suspenseful sequences, and there are a couple of moments where Jackals bursting through windows could elicit a couple jump scares. But overall the veiled cult members – often rarely seen besides shadowy figures in the night – don’t feel overwhelmingly menacing like they should.

While most of Jackals is fine-fair-not bad in a mediocre sense, the ending is the most egregious part of the whole thing and probably the tipping point for most viewers. Fortunately, there’s no more movie left to see; however, the inconclusive abruptness of the conclusion will leave a bad taste, making all of this seem unnecessary.

Kevin Greutert’s no stranger to gore – he worked on the Saw films – and Jackals does feature some gruesome violence, like viscious stabbings and a couple of cut throats. However, one wishes the film’s home invasion was more psychological than gory.

Besides a slinky belly-shirted female Jackal, nothing.

Scream Factory’s Blu-Ray release of Jackals looks good with its original 2.39:1 aspect ratio. Colors look clear and crisp and there’s no issues in some of the darker scenes. No problems to speak of.

Audio is presented in English 5.1 DTS-HD Master Audio and sounds clean, with no drops or flaws. There are included English subtitles.

Jackals is relatively light on extras but does include an audio commentary from Greutert and writer Jared Rivet to give some more context to the film. There’s also a 19 minute series of interviews with the cast and crew which adds depth to this release, plus the usual trailer and slipcover. While it’s not going to be an impressive package by any standard, this is still a quality Blu-Ray from Scream Factory.