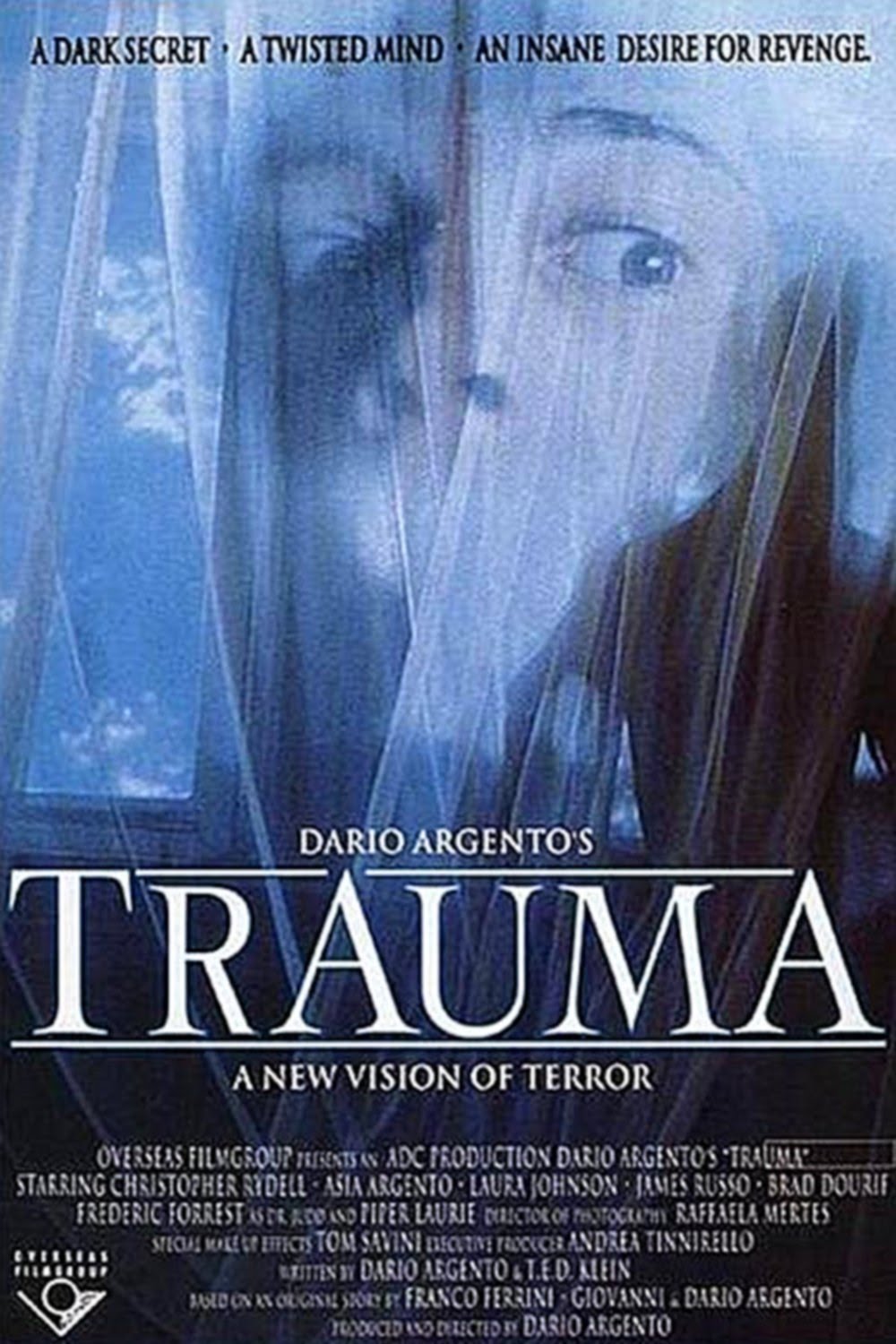 There’s a black-gloved killer running around Italy cutting people’s heads off with an auto-garroting machine during rainy nights, and Aura Petruscu experiences it first-hand when her mother and father are murdered during a seance. Aura teams up with an artist/reporter named David to figure out why Aura always seems to be in the wrong place at the wrong time, eventually figuring out that the Head Hunter is targeting a group of nurses and a doctor who experimented with electroshock treatment. Will they find the giallo-esque killer?

Dario Argento’s 1993 film Trauma was his first major return to directing since 1987’s Opera. He did direct a segment in the 1990 anthology film Two Evil Eyes (review forthcoming) but the break found him focusing on writing stories rather than making them, including 1989’s The Church and 1991’s The Devil’s Daughter. It’s also the first time he directed his daughter Asia Argento as the film’s star, though she was involved in the productions of Demons 2 and The Church previously.

The film stars Asia Argento as Aura, an ailing young woman with anorexia who has been attempting to run away from her parents for some time because of her forceful commitment to the local Faraday Clinic. Her mother (Piper Laurie) is overbearing and strange, and her father seems cowed due to his wife’s frigidness. Fortunately, Aura doesn’t need to deal with her parents for long – they’re both murdered by the local Head Hunter killer during a stormy night seance session, leading Aura to experience even more trauma about her family history.

The setup for Trauma is intriguing and Argento gets to the meat of the plot quickly – we get an introductory killing, showcasing the killer’s unique auto-garroting machine, and then Aura’s parents are murdered only a few scenes later. Argento doesn’t waste time highlighting the black-gloved murderer’s strange method of killing; the characters also uncover that the Head Hunter only murders on rainy nights, or when the killer is able to recreate rain as Argento shows the audience later in the film.

The Head Hunter is a particularly dynamic character because of the manner of killing. There’s a lot to glean from what we learn about him or her, too: there was probably some past trauma causing the killer to associate rainy nights with murder, there’s something meaningful about the act of decapitation, and the killer’s probably not incredibly strong because he or she requires a device to do the beheading. As killers go, this is one of Argento’s more interesting creations while still maintaining the aura (pun intended) of giallo stylizing.

The film could use some editing, though; running at nearly an hour and 50 minutes, Trauma feels too stuffed with fluff. Part of that issue comes from attempting to pin too much focus on Aura as a character, who is not very compelling despite some of the emotional development Argento tries to give her. The young Argento is really not a great actress in this film, and her inability to emote takes a toll on the plotting. But the bigger mistake comes from the love story Argento weaves into the film, an unnecessary element as the much older David falls for the sixteen-year-old Aura. The film’s Italian setting does make this tryst contextually legal; however, David’s constant references to Aura as a “kid” ensure that their later hookups are even more disturbing. Cutting out the relationship would leave Trauma at a manageable 90 minutes, yet still with enough pathos to warrant the film’s finale.

Speaking of finales, Trauma’s killer reveal is frustrating. The twist works, and I think it’s somewhat ingenious; but the viewer’s lack of information about the Head Hunter’s past leaves no room for audience detectives to figure out the killer’s identity besides an educated guess based on one big name in the credits who disappears for a considerable length of time. Still, the Head Hunter is probably the biggest reason to see Trauma, with a close second being the terrible elevator decapitation scene.

Trauma isn’t one of Argento’s finer works, but it’s also not one of his worst. Its storyline is at least straightforward, and some of the old Argento tricks are still here: a compellingly tense scene as a boy sneaks into the killer’s house, a creepy moment as David interacts with some mentally unwell patients at the Faraday Clinic, and his fascination with insects are all highlights. This slasher/giallo hybrid will appeal to fans of Argento’s work, but it definitely could use some off the top in the editing department.

Lots and lots of beheadings, sometimes sort of comical and other times played pretty straight. There are also a few stabbings, bludgeonings, and more. It’s not a very gruesome film, but it does have a bit of blood here and there – pretty standard stuff.

Dario’s DAUGHTER Asia is topless for a quick moment, and we also get a peek at a nude Laura Johnson. Even Hope Alexander-Willis gets a see-through shirt moment. On the male side, Christopher Rydell is shirtless a couple times and there’s a quick glimpse of his backside, although hidden in shadow.