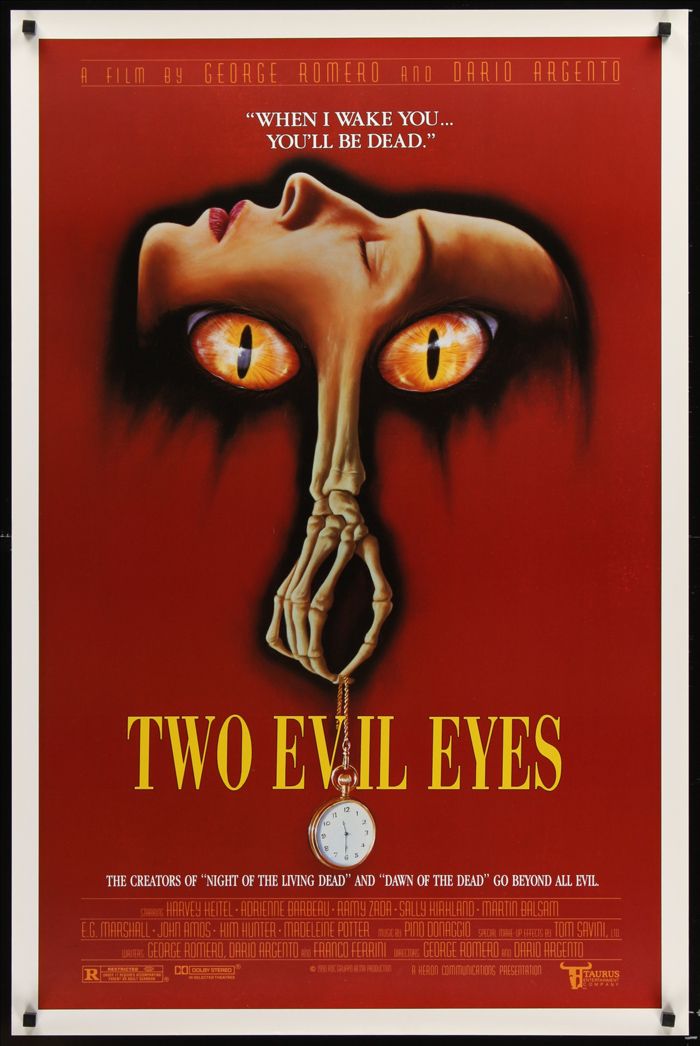 Horror Masters George Romero and Dario Argento tackle Edgar Allan Poe in two tales that take way too long to get to the good stuff. At least the gore is sweet.

It’s been a pretty good week so far in regards to checking out Dario Argento films. We had some pretty big classics (Suspiria, Tenebrae) and a few not so classics (Mother of Tears), but sadly it has to end eventually. Ryne figured he would go out with Trauma, an okay Argento, and I figured I would end it with Two Evil Eyes. Although technically not a full Argento flick, as it’s a collaboration film with none other than George Romero. Still, I think it counts. Unfortunately, the movie is a long, plodding horror film, with highlights and numerous disappointments. Man, I should have stopped when I was ahead.

Two Evil Eyes is based on the works of Edgar Allan Poe, specifically, “The Facts in the Case of Mr. Valdemar” and “The Black Cat” (how many times do we have to see this story told? I feel like I just got done checking out Arrow Video’s Black Cat box set). The first story told is directed by Geroge Romero and you know Romero, he has to throw a zombie in no matter the story. Poe’s version featured a man on his deathbed who agrees to be hypnotised but ends up dying right after and becomes stuck in a weird limbo state. The story behind the film’s version has Adrienne Barbeau waiting for her old husband to croak. In the meantime, she wants to get all of his money, so she has her lover/doctor hypnotise the geezer to sign everything over to her. Of course, like the story, he ends up dying and becomes stuck in that weird limbo I mentioned before, but George Romero takes it a bit further having the dead husband walking around like a zombie, speaking about other dead people coming back. I got excited when I heard that, but the other dead people turned out to be spandex wearing weirdos. A pretty big disappointment.

The only enjoyment I got out of this story was the gore and the appearance of Tom Atkins as the grizzled Detective (of course). There needed to be a lot of trimming with this tale, as it ran on way longer than it should have. A nip and tuck here and there would have made this story way more fun and enjoyable.

The next tale is “The Black Cat” and is directed by Dario Argento. At first, the story started off pretty cool with a nod towards “The Pit and the Pendulum” story, with a graphic crime scene. Harvey Keitel plays a photographer by the name of Roderick, who specialises in the weird and disturbing. His girlfriend Annabel ends up getting a cat, and he hates it. Roderick has a brilliant idea of putting the cat into his work and ends up killing it. Annabel isn’t too happy about the cat disappearing, and the tension between the couple rises and rises until the inevitable murder and concealment of the body. What’s that noise behind the wall, though? Sounds like a cat. Yeah, we’ve all seen this story done before.

Much like George Romero’s attempt at Poe, “The Black Cat” runs on much longer than it needs to. There is a lot of pointless scenes to pad the time, but the parts that do stick out as enjoyable are the moments of really cool gore, and that reveal scene was pretty gnarly.

Honestly, Two Evil Eyes is the type of movie that would have worked much better as two separate Tales from the Crypt or Darkside episodes. Initially, the idea behind the film was to have a bunch of directors coming together to produce a bunch of Poe related tales, but that never happened. The smart approach would have been to bring back Tales from the Darkside and debut these two shortened stories as the premiere episode.

Two Evil Eyes is a violent, gory film and the effects were supervised by none other than Tom Savini, who has a cameo in “The Black Cat.” We have some pretty gnarly murder scenes and one knife to a hand scene that was so freaking awesome looking.

Two Evil Eyes doesn’t have much sex or nudity. We have a fake naked female body, which I can positively say won’t be titillating to anyone. If it turns out to be, please seek help.