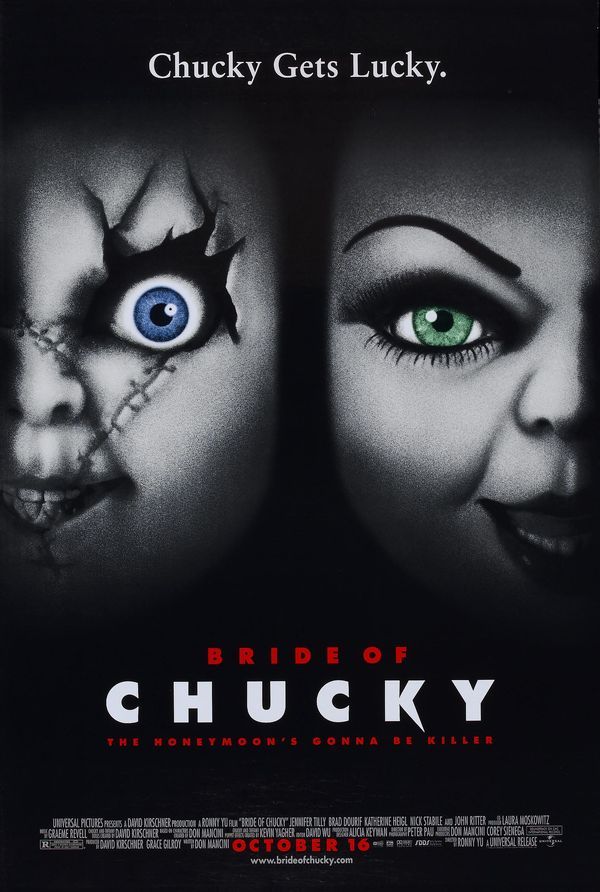 After Child’s Play 3, I kind of gave up on the series. It’s not that I didn’t enjoy the film itself; I mean, it’s pretty bad, but it’s still got some humor in its overalls. It was really just that, seven years later, I had seemingly had my fill of the little doll that killed, and I wasn’t interested in experiencing more of the same dirty jokes and banter that had come to define Chucky. But I figured, after almost two decades and three sequels, it was time to check in on the murderous Good Guy doll once again – especially with Cult of Chucky releasing soon – and I had to pick up where I left off: Bride of Chucky.

There’s something spectacularly nostalgic about returning to late-’90s and early ’00s films, and we’ve talked about it extensively over at the Blood and Black Rum Podcast; there was definitely a different way of making films back then, and the atmosphere of the time period carries into the film just as much as an ’80s movie takes on that decade’s stylistics. Bride of Chucky is absolutely a late ’90s film on all fronts: it starts off with Rob Zombie’s nu-metal “Living Dead Girl,” makes jokes about Chucky listening to heavy metal, and showcases an early role for Katherine Heigl rocking a spectacularly bad wardrobe. There’s also a Hot Topic goth obsession that dominates most of the film, from main character Tiffany’s (Jennifer Tilly) black leather to her later dominatrix tendencies. 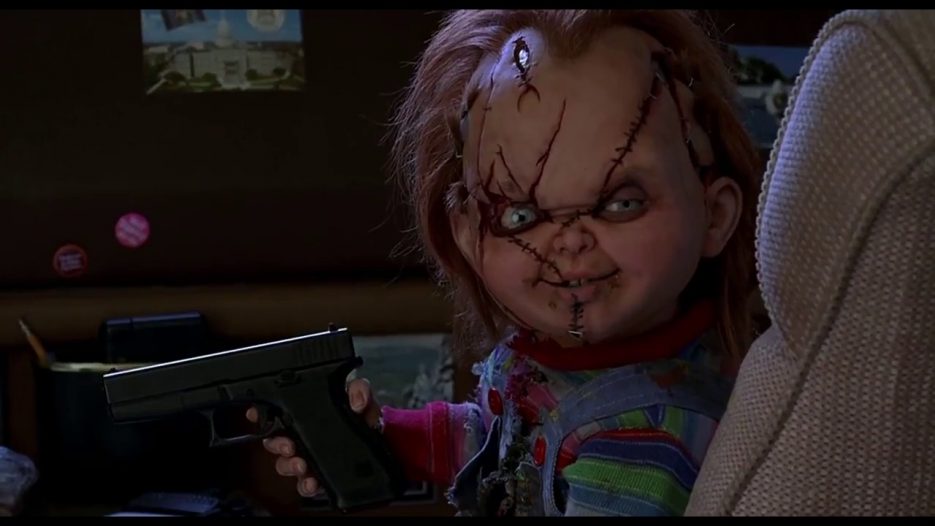 All of those facets now seem pretty dated – and overwhelmingly generic, a sign of that time period’s fascinations – but rewatching in 2017, Bride of Chucky feels fairly refreshing. That’s also in comparison to Child’s Play 3, which hit at the beginning of the ’90s era and certainly indicated that the ideas for Chucky and Andy were petering out. Bride of Chucky pulls Brad Dourif back in, allows Don Mancini to resume his helm at the writing desk, and gives director Ronny Yu a shot at recapturing the allure of the possessed kids’ toy.

And Bride of Chucky does a great job of jumping into a new storyline, this time revolving around the sexy Tiffany as she raises Chucky from the dead to wreak havoc on the world yet again. This time, though, there’s motivation to Chucky’s rampage besides wanting to get back into his regular body: Tiffany wants to get married.

Cue all of the usual misogynistic jokes (Chucky misspelling “woman” as “bitch,” refusing to wash the dishes after Tiffany cooks) but also a truly enjoyable experience as they hitch a ride with a young couple who are trying to escape from a corrupt uncle and subsequently get blamed for all of the murders Chucky and Tiffany commit. The most compelling scenarios occur after Tiffany also becomes a doll: she’s just as nasty as Chucky – sometimes moreso – but she also has a penchant for some surprisingly inventive kills.

Bride of Chucky isn’t focused on the serious aspects of its predecessor Child’s Play; instead, it wants to emphasize the ridiculousness of the plot. It even draws attention to the series with metacommentary, mocking some of the previous entries and jokingly crowning Chucky as a more iconic villain than either Jason or Michael Myers (both making a quick appearance in the evidence locker). While some of the jokes fall flat, this is far from the low-budget dreariness of something like Jack Frost or the Puppermaster sequels; Mancini puts some heart into the comedy, and it shows especially thanks to Dourif’s deliviers (and in some ways Tilly’s, who is intentionally dry here).

This was all a huge surprise to me considering I had skipped out on the series for so long, and it was a great way to begin my October Halloween festivities. Hopefully you stick with Cultsploitation this month as we work through some awesome (and not-so-awesome) vintage horror films – and that includes upcoming retrospectives on Seed of Chucky and Curse of Chucky before we dive right into the new Cult of Chucky. Happy Halloween – we hope to see more of you all this month!