CULTOWEEN 2017: Ranking the ten shorts from Tales of Halloween

By 2015, there was already one seminal Halloween anthology film that had wormed its way into horror fans’ hearts: Trick ‘r Treat. But that didn’t stop Axelle Carolyn and the rest of the October Society from creating a series of ten tales set on Halloween night with Tales of Halloween. Unlike the earlier anthology, Tales of Halloween doesn’t make as much use of recurring storylines – instead, these ten shorts are fairly standalone (although some do include characters from other stories). Ten tales is a lot for viewers to take in, and it leaves a lot of room for both hits and misses – but let’s take a look at the ten shorts to see how each of them stack up in this All Hallows Eve offering, from worst to best.

Andrew Kasch and John Skipp envision two rival Halloween decorators going head-to-head after their visions about what Halloween actually stands for clash. In some ways, the tale is a good example of how horror has changed throughout the years and how fans have either grown to love the contemporary violences or how they’ve turned away in favor of the more classic black-and-white terrors of yesteryear. But as a short, this doesn’t work as well as one might hope, mainly because it’s a slow-paced affair that comes off far too silly and contrived. It’s a good attempt, but the weakest of the bunch.

9. THE WEAK AND THE WICKED

This tale about violent Halloweens past attempts to recreate the classic Western standoffs of old, but the method doesn’t translate well to a story set on Halloween night. The short is plagued with slow pacing as the heroic Monster tries to lead three punks back to the place where they set his house and family on fire in his childhood, and it takes quite a while for things to get moving. The monster itself has little presence in the tale, and this feels like the least Halloween-set of the ten.

8. THE RANSOM OF RUSTY REX

Besides featuring a cameo from John Landis, “The Ransom of Rusty Rex” is a generic offering from Ryan Schifrin about two kidnappers who accidentally nab an evil little troll monster instead of a kid – eventually trying to drown him and leave him miles away before realizing that Rusty Rex can literally never die. It’s a fun short but it goes on for too long, with the kidnappers never really catching on to the supernatural element. It’s also pretty predictable.

I wouldn’t say that “Grim Grinning Ghost” is necessarily a bad short – it does everything pretty well, from a ghoulish Halloween party with Lin Shaye and Mick Garris in attendance to a spooky walk home alone through a Halloween-lit town – but it feels like the tale never really comes together to do anything. It’s simply a series of tense stalking moments and jump scares, and while that’s not a terrible feature in the story, some of the other shorts manage to capture a compelling story and make it scary at the same time. This one falls just short.

Another middling short is Neil Marshall’s story about a giant killer pumpkin that rampages across town after it consumes women, children, and anything else it can get its stalks around. The pumpkin effects aren’t very good, which does bring down the film – though it’s supposed to be hokey, I was hoping Marshall would go a bit more ghastly with this one. However, I do like the synth score and the homages to Halloween III: Season of the Witch with the spooky factory mass-producing these dangerous jack-o-lanterns.

In some ways, this is a good rendition of Friday the 13th, The Texas Chainsaw Massacre, and Tucker and Dale vs. Evil roped into one short film. There’s an even bigger twist with the addition of a cute and cuddly alien before he possesses the corpse of a teen and becomes something akin to a Deadite. But the CGI effects are quite bad and the comedy tends to fall flat. Still, we’re into Tales of Halloween territory where the stories are all close together in quality, so ranking at number 5 isn’t necessarily a bad thing.

The film’s opening short is “Sweet Tooth” from Dave Parker, and it’s a fun story about two teens telling a younger brother a spooky story on Halloween. The titular slasher character’s backstory doesn’t make a ton of sense, but it’s also not supposed to: this is a representation of classic scary tales told to youngsters, and the violence and elaborate grotesqueness highlight this tale.

“Ding Dong” seems silly at first, but the subtext beneath the goofy façade makes it a compelling piece about motherhood and the effects infertility can have on hopeful couples looking to get pregnant. The witch design is particularly intriguing too, with red makeup, multiple arms, and corrupted fairytale garb. Look past the jokes to see a much more serious psychological short underneath.

Darren Lynn Bousman’s is the second tale in Tales of Halloween and it sets a very different precedent from “Sweet Tooth”; it shows that not all of these stories are going to be scary, and that some can have some dark humor thrown into the mix. “The Night Billy Raised Hell” is acerbic and sharp, a story about a young kid who makes a mistake and accidentally raises the ire of the Devil, his next door neighbor. The whole thing is shot as though Billy eventually becomes the Devil’s accomplice, committing random acts of violence throughout the neighborhood on Halloween night. But then Bousman brings things back to reality with a surprise twist, one that is deliciously devilish and black. 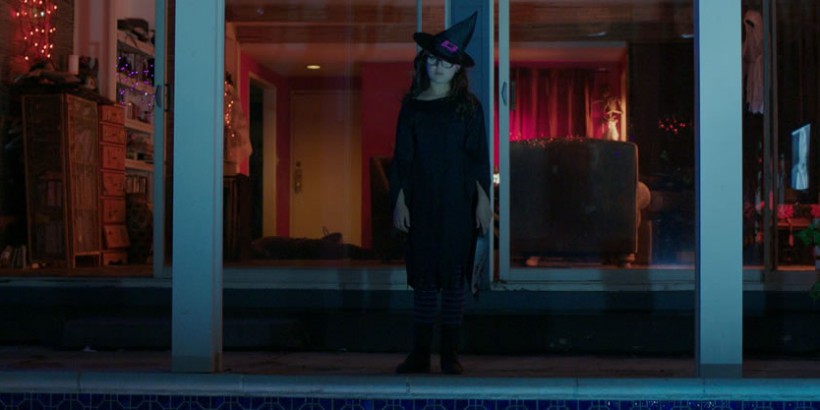 Ironically, the best of Tales of Halloween is the short that’s the most simplistically named. “Trick” starts off with some great decorations and a fun party among friends, all of them drinking and giving out candy to trick-or-treaters. However, they’re visited by some murderous kids who seem to love murdering random people in horrible ways. The film’s violence is high as one by one the four friends are killed in their home. But the end shows that this isn’t a random act of violence, and these kids aren’t even evil by any stretch of the imagination: photographs and flashbacks reverse roles, and the audience’s reaction to the characters swaps so quickly that it causes whiplash. “Trick” is truly the best tale of the night.

Everyone’s mileage will vary, though, and Tales of Halloween certainly caters to many different fans of horror. What are your favorite shorts? Let us know in the comments!