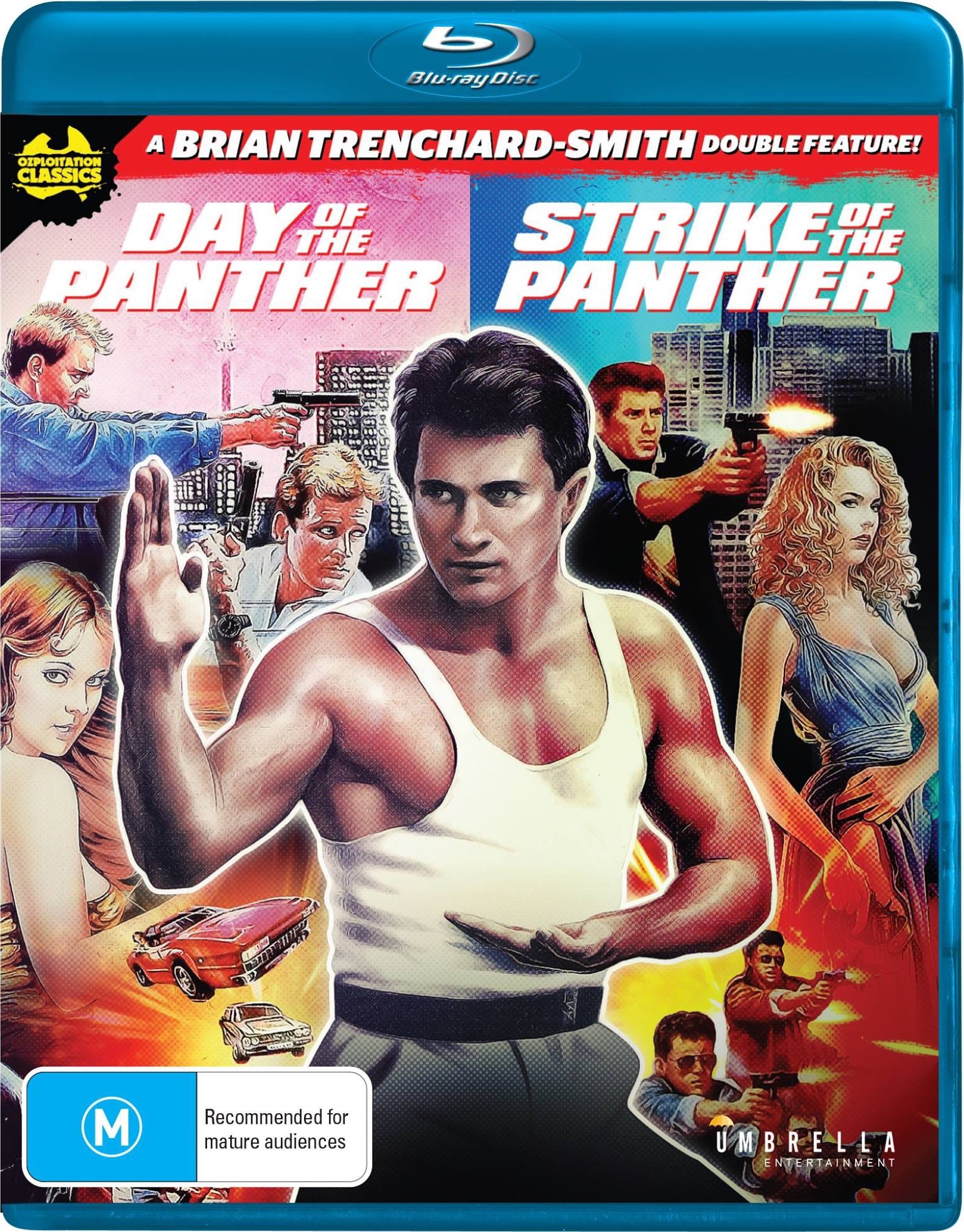 We’ve got ourselves a couple of shrimp on the barbie today! Two Ozploitation Martial Arts choppas! Day of the Panther and the direct follow-up Strike of the Panther. Before we even dive into these flicks, a fair warning is needed. If you’re thinking Van Damme, think less him and more Cynthia Rothrock.

The year is 1988 and Australian Martial Arts expert Edward John Stazak is looking to rock the world with his cat-like skills and devilishly good looks. The plan is to shoot two films back to back, featuring all the action any teenager or young adult could want. Unfortunately, the original director is not working out, and Brian Trenchard-Smith is brought in to save the day. He inherits a problematic script and miscast actors. Trenchard-Smith continues to fix the difficulties by recasting and working on the script as the shooting days progress. Does everything work out in the end? *iffy hand manoeuvre*

Day of the Panther is the first film in the-two film series, and it features John Stanton bringing his daughter and best friend into the secret Martial Arts organization of the Panther. Unfortunately, his daughter is no match for the brute skills of Jim Baxter (James Richards), a deadly drug dealer. Stazak plays the best friend with the best name, James Blade. Blade seeks revenge and hooks up with John Stanton and his sultry looking niece (Paris Jefferson) to bring down the criminal organization run by the bastard offspring of Peter Cushing and Nicolas Cage.

Day of the Panther features a tired cliche storyline, but it disguises it with a mix of entertaining fight scenes and numerous workout montages. The acting isn’t very noteworthy, and the dubbing is atrocious at times. However, given the fact the film isn’t played seriously and is meant for a certain type of crowd, the same crowd that got a kick out of those Rothrock Martial Arts flicks from the late ’80s and early ’90s, you can’t go too wrong giving this film a spin.

Strike of the Panther picks up immediately after the entirely conclusion-less ending of Day of the Panther. Actually, that’s a lie. It first spends 13-minutes recapping Day of the Panther! After that lengthy and unnecessary recap, we get into the meat of Strike of the Panther. Now that James Blade has taken down a giant drug syndicate, he is busy recruiting a bunch of moustached men and one woman (Paris Jefferson returning) to train in the art of the Panther! Frankly, this entire subplot is pointless and is used to just give James Blade a job in rescuing a heroin-addicted girl in a whorehouse. When Blade heads to the whorehouse to rescue her, he gets into all sorts of slapstick moments, and meets one guy in a chicken suit. Of course, this subplot doesn’t have anything to do with the main plot either. The main plot is about Baxter escaping out of prison and setting up an overly convoluted scheme to lure Blade into a factory to have him battle a bunch of hockey mask-wearing ninjas while a bomb slowly ticks down. Meanwhile, a hurt John Stanton is telepathically communicating with Blade from a hospital bed!?!

Umbrella Entertainment has released both films on a single Blu-ray disc, and the transfer comes from a 4K scan of the original 35mm interpositive elements. Each film is presented in their original aspect ratios. There is a bit of dirt and debris present in each movie, with the second having a noticeable increase in “cigarette burns” showing up. There is also a bit of softness during certain scenes. Nevertheless, the film’s problematic transfers aren’t enough to distract you from your viewing enjoyment. As for audio, each film serves up a DTS-HD MA 2.0 track, and besides the terrible dubbing at times, there were no immediate issues with the sound. Unfortunately, the only extras are the trailers for each movie, and they are in rough shape.

Having never heard of these two films before, it was nice to have them on a single Blu-ray from Umbrella Entertainment. Sure, a few more features and a slightly more presentable transfer would have been nice, but the sheer cheesy fun of these two flicks is enough to warrant purchasing the Blu-ray.

The films are low budget, cheesy, and full of martial arts action. The Blu-ray from Umbrella Entertainment could stand to have a few more extra features and cleaner transfers, but overall the package is worth kicking up.
Day of the Panther
Strike of the Panther
Blu-ray
Reader Rating0 Votes
3.5
Hosting screenshots is expensive. If you want to see more galleries, consider donating!