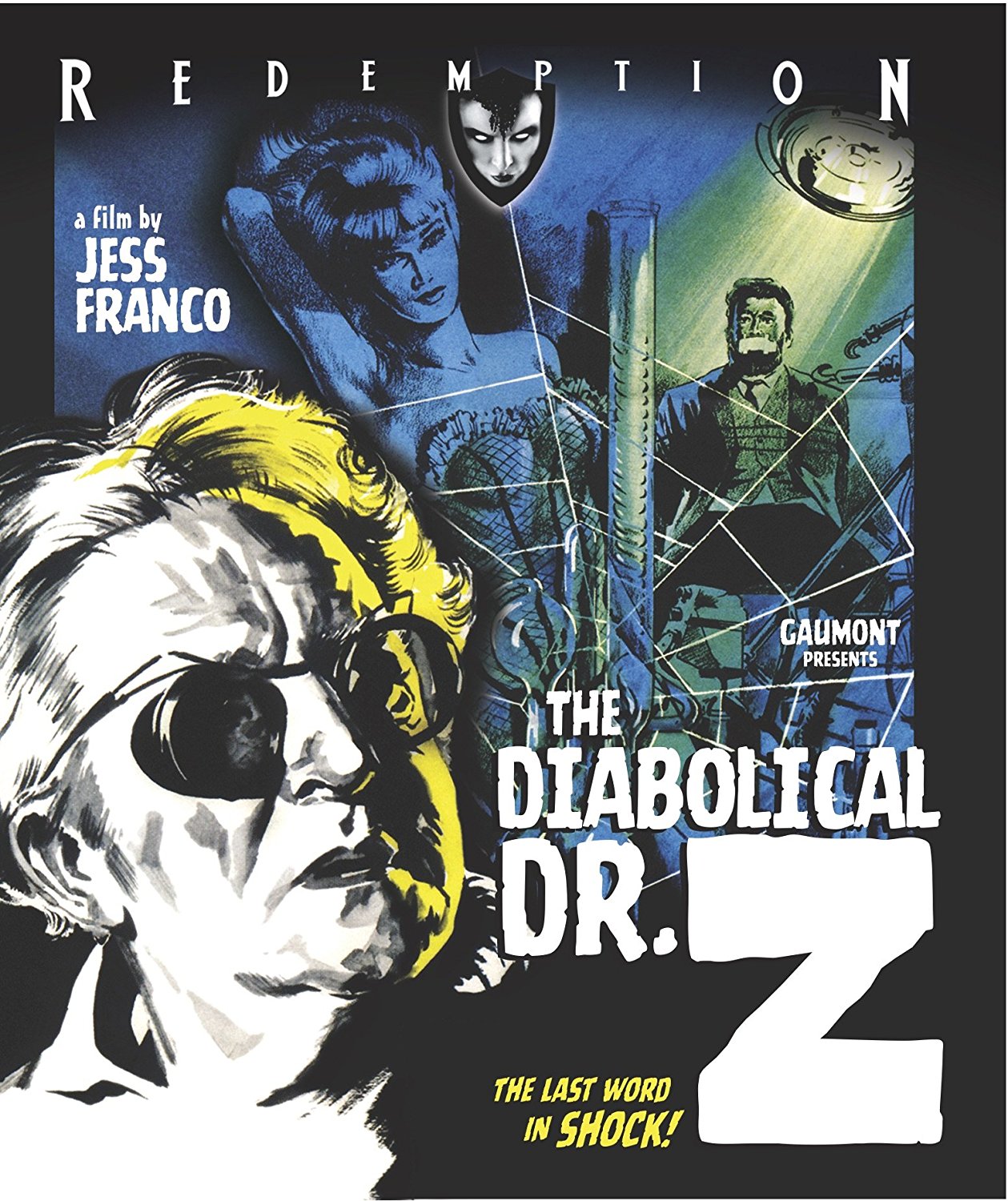 Dr. Zimmer has been experimenting on animals to establish where the neurological center of good and evil lies, and he feels like he’s perfected his research enough to start trying things on human beings. When a scientific council denounces his work and calls it blasphemous, Dr. Zimmer dies; but his daughter Irma Zimmer begins using this ungodly science to create slaves to do her bidding, mostly to kill the three scientists who caused her father’s death. It’s diabolical!

It’s not often talked about, but The Diabolical Dr. Z should win over some fans of the mad scientist formula.

Jess Franco’s The Diabolical Dr. Z wasn’t his first mad doctor film; he first trod that territory in 1962’s The Awful Dr. Orlof, in which a crazy doctor abducts beautiful women and cuts off their faces to use as skin grafts for his daughter’s deformity. A lot of those elements come out in Dr. Z as well, although in this case it seems like Franco intentionally reverses his storyline: instead of a mad male doctor, the real diabolical Dr. Z is female; she also sustains a face-scarring burn in a fire, but her real motivation is to get revenge on the people who humiliated her father. The Diabolical Dr. Z seems to take place in a Franco alternate reality, but its contribution to the mad scientist genre feels pretty important despite being an offshoot of one of his other films.

The movie follows Irma Zimmer (Mabel Karr), daughter of the intelligent but somewhat crazy Dr. Zimmer (Howard Vernon, also of Dr. Orlof), who takes up his mantle after his death; his embarrassment due to his life’s work being rejected by scientific council kills him, and Irma wants to use his science to get back at those who said his research was cruel and unusual.

But his research truly is diabolical because it enslaves people against their will; it pinpoints the element of human choice – to be good, or to be evil – and forces them into submission, doing whatever their master bids. Irma recruits a strongman named Philippe (Fernando Montes) after he escapes from prison, and then she finds the beautiful Miss Death, Nadia (Estella Blain), to seduce the men who have wronged her family.

Nadia proceeds to woo the two scientists and eventually kill them, and The Diabolical Dr. Z finds strength in its female characters. In fact, it’s surprising that the titular Dr. Z is actually a woman; most mad scientist films center around men, and, like The Awful Dr. Orlof, showcase a misogyny where men force women to do their bidding before getting sliced and diced. Franco’s film is interesting because Irma Zimmer is quite a powerful figure, and Karr does a great job exuding that strength.

Franco gets a bit bogged down in slow pacing, but The Diabolical Dr. Z is stoically plodding and often artistic in its eccentricities, with a few striking shots showcasing the moody atmosphere of the film’s setting. Blain is hypnotic, too, in her slinky see-through spiderweb dress, and sometimes the film turns into an arthouse French romance film rather than horror. That’s not a bad thing; The Diabolical Dr. Z feels surprisingly different (and refreshing) within a rigid subgenre of horror that covers the same themes over and over again.

Viewers might have a hard time with the tedious movement of the movie, but this is one of Franco’s finer moments: a digestible, succinct story about revenge that revolves around women, and one that doesn’t get as lurid as some of his other works. It’s not often talked about, but The Diabolical Dr. Z should win over some fans of the mad scientist formula.

The film’s black-and-white nature limits some of the violence, and much of it happens quickly with no real bloodshed. However, it does have its moments, including a lot of needle-pricking and some fingernail scratches thanks to Nadia’s very long nails.

As mentioned previously, Estella Braun often wears a see-through spiderweb costume because of her burlesque dancing, baring both breasts and butt quite a few times (and a very quick glimpse of full-frontal, though it’s mostly shadowed).

The Diabolical Dr. Z has been released on DVD before by Mondo Macabro, but Redemption Films’ Blu-Ray is quite a step up in picture quality. The film is presented in 1.66:1 aspect ratio, which allows a lot of footage to make it on-screen. The image is clean, crisp, with a healthy helping of grain that doesn’t distract from the picture itself; and there’s no damage to be seen, either. Comparing these screenshots to the previous DVD release reveals the huge leap forward in PQ; this is much more detailed and clear, and bravo to Redemption Films for doing such an excellent job on this disc.

The film gets both a French language linear PCM track and an English linear PCM track; both sound good, though I much preferred the French audio due to the recording quality of the English voiceover. Both are suitable, though, and if you’re watching the French there are English subtitles to accompany it. The English soundtrack, however, does not match the French translation and there’s no additional subtitle for that.

Unfortunately the disc is fairly limited with its extras, but Tim Lucas does provide a full audio commentary for the film. The release gets a nice menu as well, and a theatrical trailer is also provided. Unfortunately, Redemption did not bring over some of Mondo Macabro’s special features like still galleries or English language titles, but given the fact that nearly everyone involved in production of the film is dead, the lack of extras is understandable.