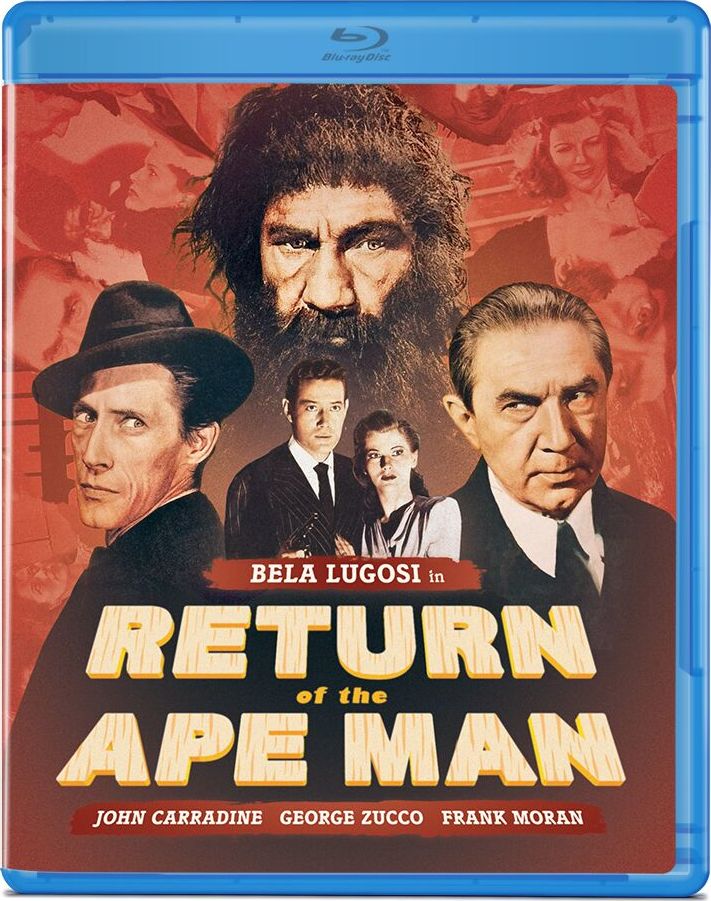 Prof. Dexter has been working on a way to revive bodies from frozen states, and so he and his friend Prof. Gilmore journey to the Arctic for a one-in-a-million chance of finding a suitable body for their experiments. And yet what do you know, they just happen to find an ape man sufficiently frozen in the permafrost! From there, Prof. Dexter revives the ape man, then proceeds to transplant Prof. Gilmore’s brain into the creature to see if that will actually work. Unfortunately, he creates a Kong-like man driven by primal and romantic impulses.


Boring is a good word to describe Return of the Ape Man too, because despite its truncated running time, it’s often a plodding, hackneyed story.

Return of the Ape Man is one of Bela Lugosi’s cheap films from the ’40s, joining a slew of other movies he starred in at the time. As Lugosi was recruited for more and more horror motion pictures, there was often a distillation of the themes within them: in short, a downward exponential curve appeared, and most of these films lacked the depth and entertainment value of Lugosi’s best works. Return of the Ape Man is a good example of a film recruiting an esteemed star only to give them minimal screen presence: both Lugosi and his co-star John Carradine are criminally underused in this short 60 minute picture, and it causes some fairly problematic issues.

The film stars Lugosi as – what else – a mad scientist, obsessed with preserving life for as long as possible and, once he’s seemingly perfected that science, transplanting a brain from one individual to another. This idea of taking human knowledge and giving it to another has always been around in some incarnation, and in the ’40s it was probably at its peak usage. Comically, Return of the Ape Man tends to merge its scientific experiments together, with Lugosi’s character Prof. Dexter constantly on a quest to further his own scientific goals. One might consider him less mad than simply bored.

Boring is a good word to describe Return of the Ape Man too, because despite its truncated running time, it’s often a plodding, hackneyed story. There’s nothing remarkable about what the film decides to show the audience, and for those viewers accustomed to Lugosi’s other career roles, this is more of the same from him with a less interesting plot. Carradine is often kept off-screen, especially in the film’s later scenes, wasting the potential for some good dialogue between the two veteran actors. And even the Ape Man himself is quite conventional, with his final moments basically aping King Kong on a smaller scale.

Truthfully, there’s not much to recommend about Return of the Ape Man besides the fact that completionists will want to see it just for Lugosi’s appearance. However, one can imagine that even in 1944 audiences would have felt the monkey-see, monkey-do characteristics of this derivative horror picture.

There’s very little on screen violence except for the piercing shrieks of women as their necks are throttled.

None – this is 1944, the most suggestive thing we get is Mary Currier’s dress.

Olive Films has not done much doctoring to the film itself, which is both good and bad; while this means no digital monkeying, it also shows all of the wear and tear of the source. And in this case, the source is quite damaged, with a lot of flickering, dirt, detritus, and burns throughout the film. There’s a heavy grain presence and most of the footage is not as smooth as one might expect from B&W transfers; I can’t say that the video quality is anything to marvel at, and this Blu-Ray release looks the film’s age.

There’s only one audio track on this disc, a mono audio track that often features muffled and damaged audio. It’s not bad enough to become distracting or incoherent, but it certainly could have used some work to limit some of the weaker portions of the track. English subtitles are included as well.

None – no trailer or gallery, nothing.