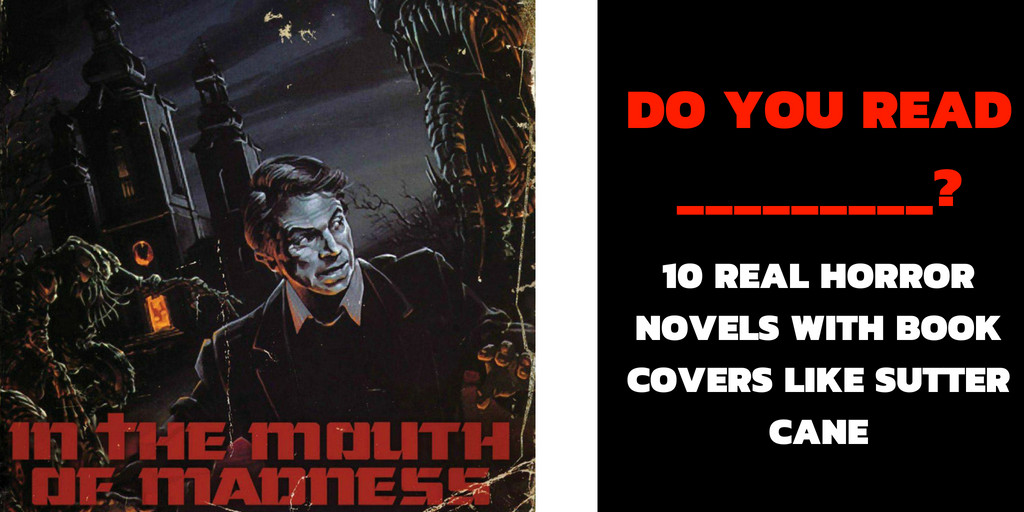 Scream Factory recently released a great Blu-ray of John Carpenter’s film In the Mouth of Madness, and watching the film makes me appreciate the real-life horror novels that inspired Sutter Cane’s book covers. Let’s take a look at a few of those fake fictions first:

Pretty cool, right? Definitely makes me want to read those. But Carpenter’s designs are really based on the popular paperback horror covers made standard in the ’80s and ’90s – featuring a spooky hand-drawn scene and chunky serif lettering plastered over it. In honor of Sutter Cane, we’re taking a look at ten real books featuring the same style of artwork; some are popular mainstream writers, some are lesser known, but all have been influential to the genre.

“For millions of years man and rats had been natural enemies. But now for the first time – suddenly, shockingly, horribly – the balance of power had shifted and the rats began to prey on the human population.”

Simple and effective – I like it!
Richard Laymon – Night Show 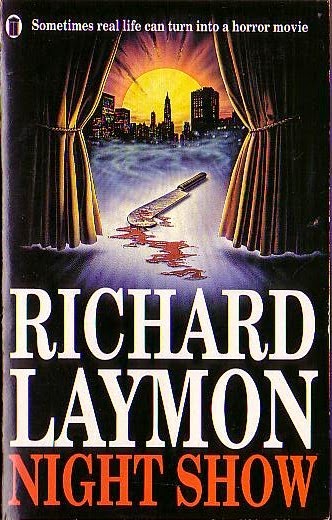 “When he was in high school Tony Johnson locked school beauty Linda Allison in a haunted house for the night. Now he has moved to Hollywood, determined to break into horror movies, and he’s forgotten all about her. But Linda is a girl with vengeance in her heart – and she certainly hasn’t forgotten him…”

Richard Laymon was probably one of the best examples of these types of horror covers, and pretty much every single one of his books followed the same format. You pretty much can’t go wrong with any of them.
Clive Barker – The Inhuman Condition 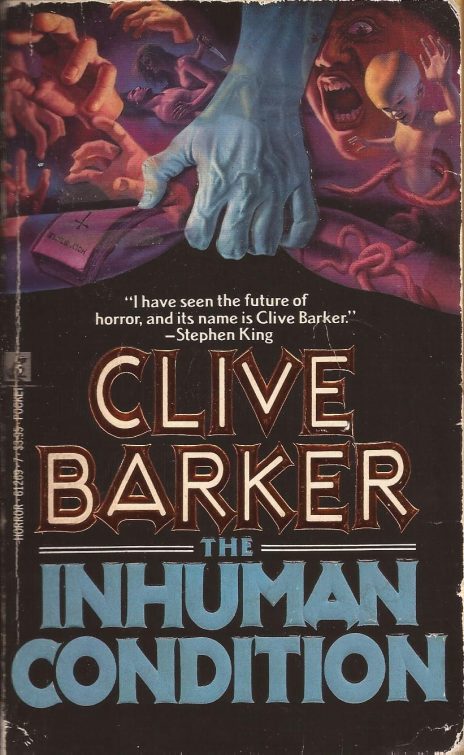 “A young man named Karney and his friends beat up a vagrant for fun. Karney steals a strange knotted piece of string he finds on the vagrant. A keen fan of puzzles, Karney undoes the knots that evening, not knowing that in doing so he is releasing a succession of demons who proceed to kill off his friends. The demons seem progressively more advanced, appearing to evolve with each knot. When he realises what he has done, Karney has to seek out the vagrant for help.”

One interesting thing about Clive Barker is that he is also an artist, so he tended to create his own artwork for books. However, they still often fell within the bounds of conventional fiction novels, as you can see from the above image. And his covers often varied widely based on release.
Bentley Little – The House

“Five complete strangers from across America are about to come together and open the door to a place of evil that they all call home. Inexplicably, four men and one woman are having heart-stopping nightmares revolving around the dark and forbidding houses where each of them were born. When recent terrifying events occur, they are each drawn to their identical childhood homes, only to confront a sinister supernatural presence which has pursued them all their lives, and is now closer than ever to capturing their souls….”

Bentley Little is another Laymon-esque author who expertly navigated the horror fiction cover genre – we could have easily picked The University, The Return, The Store, or any number of his other books for this list.
Stephen King – Firestarter

“First, a man and a woman are subjects of a top-secret government experiment designed to produce extraordinary psychic powers.
Then, they are married and have a child. A daughter. Early on the daughter shows signs of a wild and horrifying force growing within her. Desperately, her parents try to train her to keep that force in check, to “act normal.” Now the government wants its brainchild back – for its own insane ends.”

We can’t have this list without Stephen King, and Firestarter always comes to mind as a perfect example of the form. Thick gray font, ominous artwork – it really draws you in as a consumer.
Brian Keene – Ghoul 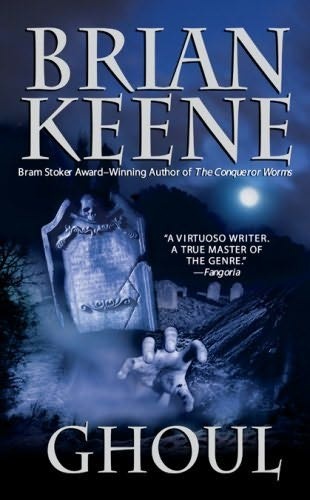 “June 1984. Timmy Graco is looking forward to summer vacation, taking it easy and hanging out with his buddies. Instead his summer will be filled with terror and a life-and-death battle against a nightmarish creature that few will believe even exists. Timmy has learned that the person who’s been unearthing fresh graves in the cemetery isn’t a person at all. It’s a thing. And it’s after Timmy and his friends.“

The font on Ghoul is very close to Sutter Cane’s novels, it’s striking. Again, Keene’s a lesser-known author but has really made a name for himself thanks to his writing and covers.
Jack Ketchum – Offspring

“Just when you thought the horror of Off Season was vanquished in their first outing, The Family, lives on… years later continuing to terrorize the coast of Maine. And their zest for life, and yours, continues on in The Family tradition. The local sheriff of Dead River, Maine, thought he’d killed them off ten years ago… a primitive, cave-dwelling tribe of predatory savages. But somehow, the clan survived. To breed. To hunt. To kill and eat. Now the peaceful residents, who came to Dead River to escape civilization, are fighting for their lives…”

You probably know Jack Ketchum from his gruesome stories like The Girl Next Door; but he also had a lot of great horror fiction utilizing the Sutter Cane style. That’s a damn effective cover, much better than the other Offspring artwork that was used.
Edward Lee – The Backwoods 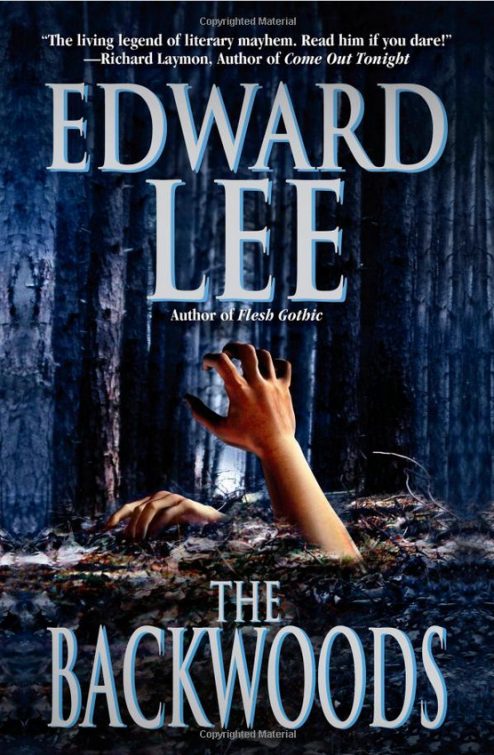 “A hideous evil stalks the backwoods of a small town, leaving fear and bodies in its wake.“

“Designed by top scientists and unleashed in a monstrous conspiracy, night chills are seizing the men and women of Black River–driving them to acts of rape and murder. The nightmare is real. And death is the only cure…“

Dean Koontz has definitely moved away from this style of writing with his current output (and maybe he should think about going back), but before he adopted the bestseller mystery genre, he was heavily entrenched in the Sutter Cane horror cover artwork.
Robin Cook – Mutation 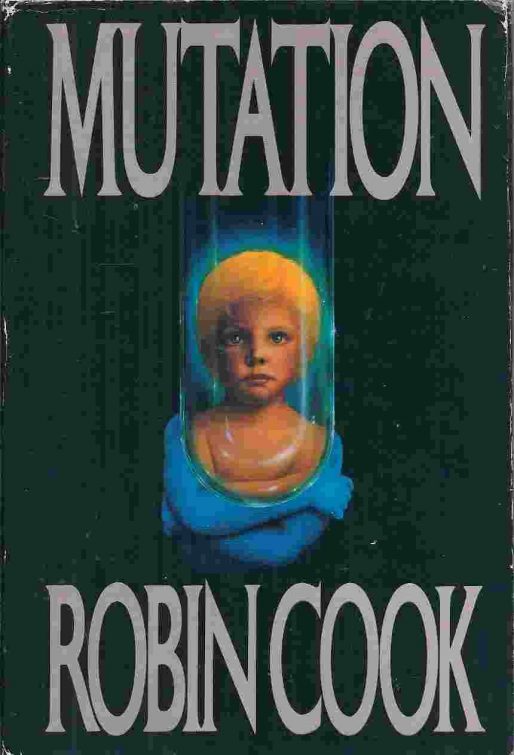 ” When ob/gyn and biomolecular researcher Dr. Victor Frank learns of his wife’s infertility, he initiates a bold—and dangerous—experiment. Unbeknownst to everyone, including her, Dr. Frank has adapted the methods of animal husbandry and molecular genetics to human reproduction. Fusing his wife’s egg and his own sperm, he sets in motion the production of a superior being, his child.”

Robin Cook primarily specializes in medical thrillers but even he is not immune to the horror cover artwork – like Mutation, which is basically a retelling of Frankenstein with a medical focus.
What other horror covers are your favorites? Tell us in the comments.
Hosting screenshots is expensive. If you want to see more galleries, consider donating!