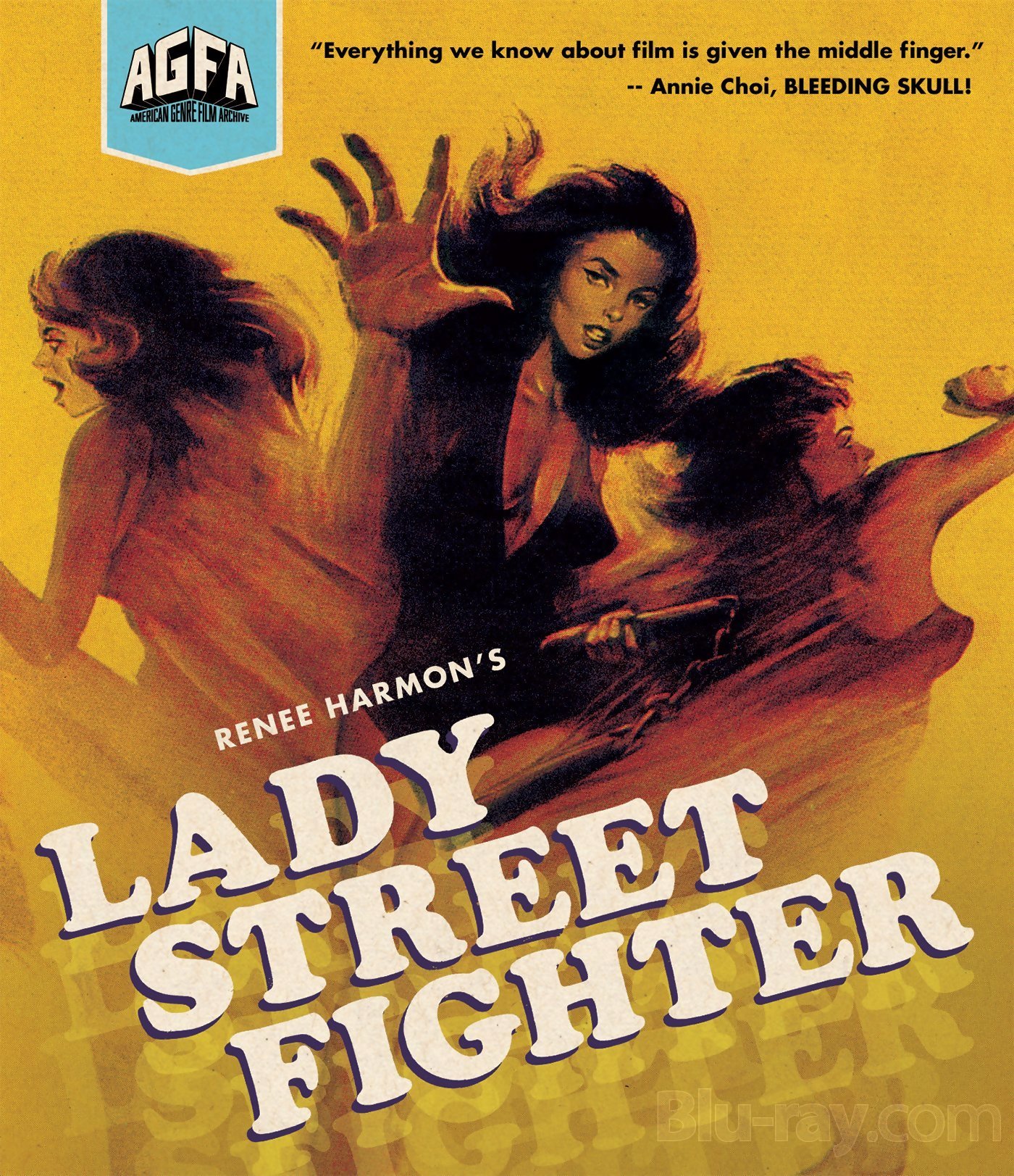 Lady Street Fighter is far from a good movie, and even fans of bad cinema might have a hard time watching such a nonsensical plot - but it is comically terrible. AGFA's Blu-ray has a good transfer and a number of special features that extreme lovers of schlock cinema will want to check out.
Film
Blu-ray
Reader Rating0 Votes
3.3

Linda Allen’s sister was murdered by mob henchmen and she’s out for revenge! It all centers around a stuffed dog and a tape that her sister never should have found, but now that Linda’s on the case, it leads her to escort services, a party where a real murder takes place, and, perhaps, love as well. But you should never trust a lady street fighter with your love or your secrets…

Lady Street Fighter is the first in a cadre of films produced and directed by Renee Harmon and James Bryan. The two independently crafted cinema trash so adeptly that it only made sense for them to team up; in Lady Street Fighter‘s case (originally known as Deadly Games before street fighting action cinema became popular in the early ’80s), Harmon also became the leading lady, a femme fatale investigating her sister’s murder that leads to an escort service, mobsters, and of course, street fighting. The film plays almost like a parody of popular action and crime films of the time, but Lady Street Fighter‘s intentions are anything but comedic.

The first real flaw apparent from the beginning of the film is Harmon’s acting – it’s a striking precursor to Tommy Wiseau, from the accent to the line delivery. Harmon delivers a hilariously underwhelming performance throughout, and even her action sequences are awkward and unbelievable. Harmon is most certainly the weak link here but she’s not the only problematic actor – the film is filled with “actors” who have seemingly been pulled off the streets to do cameo work, and many of them are surprisingly willing to go topless as well.

Lady Street Fighter also suffers from Bryan’s direction – who, it seems, may have just been taking his own direction from Harmon. The film is often nonsensical, with a storyline that jumps all over the place. The initial setup is almost nonexistent, delivered in vague dialogue between characters forcing the viewer to piece together the events that are happening on-screen and relate them to the bare bones revenge plot Harmon has concocted. Some could call Lady Street Fighter‘s surreal forward momentum artistic, but ultimately it is a mess of things happening without much reasoning or context.

One scene that really stands out is an extended party sequence wherein Harmon sucks on a celery stalk (presumably to be sexy, though it certainly doesn’t work) and whips the host, all while some guys drink and chant “Toga!” and some partygoers drink champagne from a stripper’s chest. Is it fun and random? Sure! And it might have been acceptable as a small snippet in a 73-minute film. But this sequence repeats… and repeats… and repeats for minutes, a puzzling inclusion in a film that doesn’t even get much use of the entire exchange.

Lady Street Fighter starts off unintentionally funny, but despite its relatively short running time, even fans of bad cinema will begin to tire of the film’s shtick (if that’s what it can be called). This is a “film” in only the simplest of terms, and it more resembles a fever dream of crime and revenge flicks filtered through Harmon’s unique perspective of how movies should be assembled. It’s certainly worth one viewing if only to experience the definition of schlock, but even that watch may prove a challenge for most audiences.

There are occasional areas of violence in the film – a slit throat, some gunshots – but it’s a relatively tame experience.

Lots of nudity here thanks to extras that really commit to their roles as strippers and escorts. Harmon also gets nude for a shower sequence. None of it is really appealing.

This Blu-ray from the American Genre Film Archive has been taken from a 35mm theatrical print that is the only remaining element of the film, and so undoubtedly this Blu-ray may be the best that we’ll ever see of Lady Street Fighter. As expected from such a low budget film, the actual quality varies wildly throughout, which is less the fault of AGFA’s scan than the production of the film itself. The 2k restoration manages to wring a lot of clarity out of the film’s picture, but notable issues still arise – the interior car chase sequences are heavily tinted with blue hues, and night scenes often lose some depth. However, the less-than-stellar production takes a lot of this blame. Damage is also omnipresent throughout the movie, ranging from cigarette burns, scratches, some color timing issues, and visible lines. Still, considering the problematic nature of the film’s preservation and the production itself, AGFA has done a good job with this restoration.

AGFA provides a DTS-HA Master Audio 2.0 mono track for this release which sounds relatively clear in terms of dialogue and soundtrack; during quiet scenes, there is an audible hiss. It’s not noticeable most of the time and certainly not a huge issue. English subtitles are also included – most appreciated during Harmon’s dialogue.

Also included is a new audio commentary track from James Bryan and members of the AGFA, which sheds some light on other Bryan movies as well as giving some insight into this film. There are about 8 minutes of street fighting film trailers. The package comes with reversible cover art and a liner essay from Annie Choi, who apparently holds Lady Street Fighter in much higher esteem than this reviewer. All told, the package is pretty nice considering Harmon herself has been dead for over a decade.