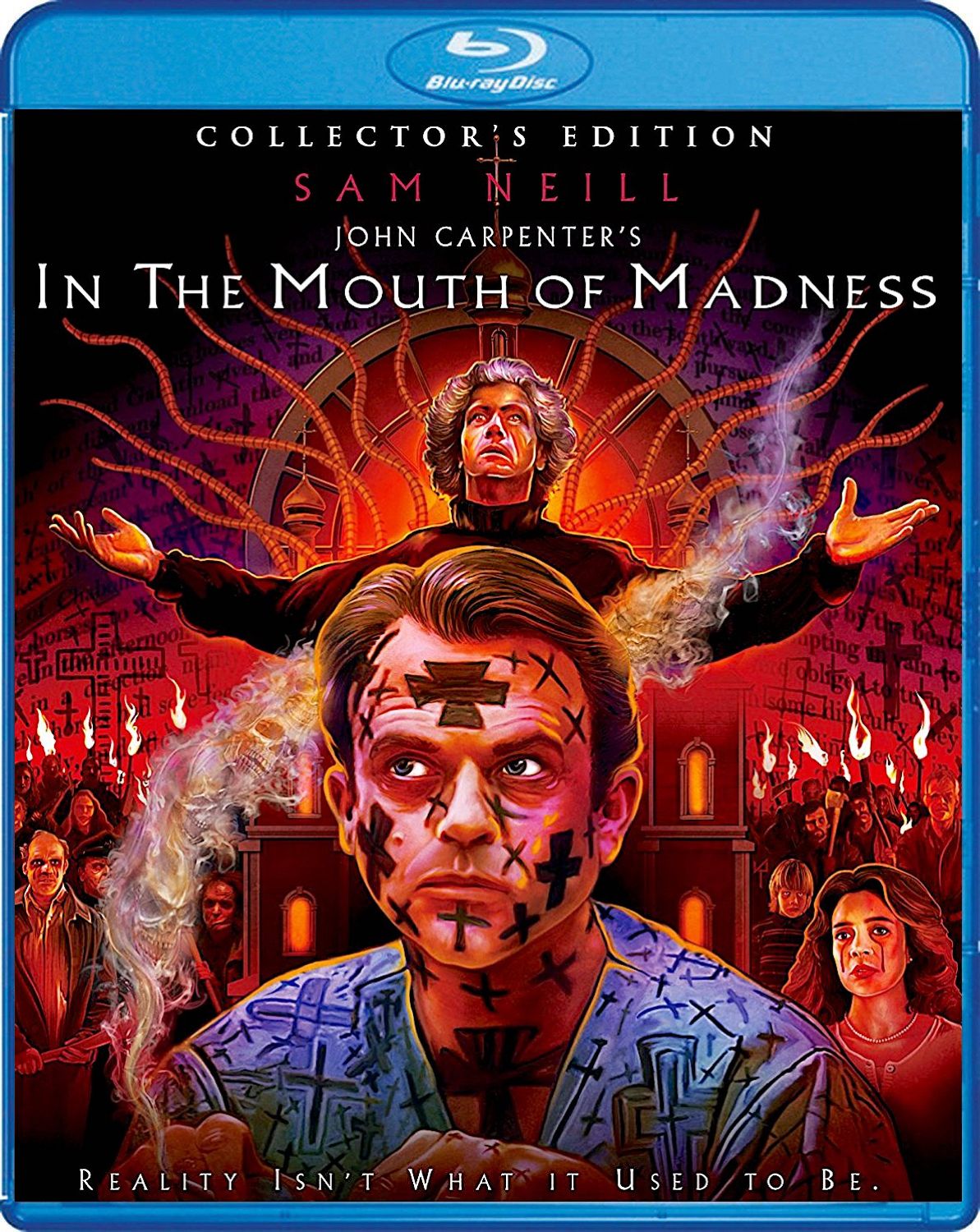 In the Mouth of Madness Blu-ray Review (Scream Factory)

In the Mouth of Madness is a mind-bending film from John Carpenter that works because of its Lovecraftian elements; Scream Factory has done an excellent job on this Collector's Edition and you need to pick it up.
Film
Blu-ray
Reader Rating0 Votes
4.5

John Trent is a successful insurance fraud investigator called to a book publishing company to find out what happened to one of its most prominent writers, Sutter Cane. His horror novel In the Mouth of Madness is due to release but the publisher can’t locate Cane and they need the finished manuscript ASAP. Trent and Linda Styles, an editor, head on a search for Sutter Cane that leads them to the fictional town of Hobb’s End. From there, Trent learns that Cane’s psychological influence on his readers is no joke – there truly is something mysterious going on in his writing, because everything he writes turns into reality. Or is it? That’s the question Trent has to figure out.

In the Mouth of Madness Film Review

John Carpenter has tackled a number of themes in his films: the very real boogeyman, the ghosts of the past, the difficulty of dealing with humanity. But his most impactful movies deal with paranoia in some sense. Besides his initial masterpiece, The Thing is often cited as his best film thanks to its constant psychological probing. Prince of Darkness tackles trusting those around you as well. In his 1994 film In the Mouth of Madness, Carpenter revisits all of those elements while also forcing the viewer to contemplate the boundaries of reality. In many ways, Prince of Darkness and In the Mouth of Madness share a lot of the same ideas, but one thing that Carpenter never really touched on before the film was Lovecraft’s influence on his filmmaking. Here, he brings the Elder Gods of Lovecraft’s mythos into the modern world, centering around forbidden knowledge and the precarious balance humans have with their own sanity.

The film follows Sam Neill’s character John Trent as he searches for the famous horror novelist Sutter Cane (Jurgen Prochnow), an antagonist inspired as much by Lovecraft as he is Stephen King. The search for the author takes Trent and his editor partner Linda Styles (Julie Carmen) to a quaint New England town stylized after Lovecraft’s own home called Hobb’s End, purportedly fictional and yet existing. Carpenter’s direction is plodding and noir-like, but he invokes a lot of the hallucinogenic qualities throughout the early moments of the film – visions of apocalyptic imagery, fleeting sightings of tentacled monsters, dreams within dreams within dreams – that add to the film’s suspense. And despite the hard rock nature of the movie’s main theme, the rest of the soundtrack is a collected offering of droning synth work, highlighting much of the same ambience from Prince of Darkness.

Everything works fairly well, from the Lovecraft allusions to the constant reminder that reality is what we make it. Carpenter toys with his audience throughout the film, never giving them an obvious and explicit answer to the question, “What’s actually happening?” As Trent finds himself in a town full of horrors, both of the tentacled and human variety, the boundaries between sane and insane slip in and out of context. At a certain point, the viewer stops questioning what’s really happening and goes along for the ride in much the same way the film’s character begins to give up on his own delusions.

In the Mouth of Madness is an intriguing work but its not Carpenter’s best in terms of production. The acting is somewhat stilted, not aided by Neill’s lack of range and Carmen’s disinterested dialogue deliveries. The special effects work, too, leaves something to be desired – too often the film’s monsters look like plastic props rather than the intentioned slimy hell-dwellers. These are flaws but they generally don’t affect the quality of the film much; as long as audiences can lose themselves in the film’s warped reality, Carpenter has done his job.

Fans of Lovecraft, popular horror fiction, and Carpenter’s apocalyptic works will find a lot to love about In the Mouth of Madness. It is probably Carpenter’s last truly good film, and that sticks with cult fans, especially since it is also endlessly quotable. In the end, the film’s experience overpowers and issues one might have with acting or production, and this nightmarish vision of reality is a horror fan’s dream.

The film is actually quite tame because a lot of its violence happens offscreen. Still, it does have some cool elements – especially the zombie-esque makeup work and the Lovecraftian horrors that KNB concocts. It’s not gory, though, which might appeal to non-horror fans.

Absolutely nothing besides Linda Styles’ pantsuit and her sexily sucking on her glasses.

In the Mouth of Madness Blu-ray Review

Scream Factory has done a service to fans with a new4k scan of the original film elements for this Collector’s Edition Blu-ray. The video quality is great, with solid grain presence and crisp clarity without suffering from any softness, damage, or debris. One element that really stands out is the color representation – In the Mouth of Madness has a lot of tones, and Scream Factory has done a great job preserving that, most notably in the blue scene when Trent is riding on the bus. This transfer really looks great and I don’t see fans taking any issues with this.

Scream Factory has provided a 5.1 DTS-HD MA track that preserves that great Carpenter theme, as well as ensuring the dialogue is crisp and clear. No real issues with the track at all except for perhaps an occasional volume drop going from a loud sound to dialogue. Other than that, no issues to report. There’s also an English subtitle available.

Scream Factory’s Collector’s Edition disc isn’t loaded with special features like some of their output, but one thing fans will want to check out is the new commentary track featuring Sandy King Carpenter and John Carpenter. Scream Factory also includes an older commentary track featuring John Carpenter and Gary B. Kibbe, but the allure here is definitely on the new track where Sandy King Carpenter can get somewhat snarky!

The disc also includes a new interview with Julie Carman (about 9 minutes) wherein she discusses the making of the film, some of the direction Carpenter gave her, and her appreciation of the film’s cult status. Another new interview features Greg Nicotero (16 minutes) talking about the special effects and makeup work, primarily the large monster set they built for Trent’s chase scene. Nicotero also includes some behind-the-scenes footage making the effects that is new to this disc. Finally, a new Horror’s Hallowed Ground feature heads to “Hobb’s End” to look at all the locations from the film; they did a great job on this one, and it was fun to see the church from the movie now surrounded by tons of condos.

Finally, a vintage making-of featurette (5 minutes), theatrical trailer, and TV spots are included to round out the package. This also gets new cover artwork, a slipcover, and reversible artwork. This is a great package, and though I would have liked to see a stand-alone Carpenter interview, you can’t go wrong with this new Collector’s Edition package from Scream Factory.