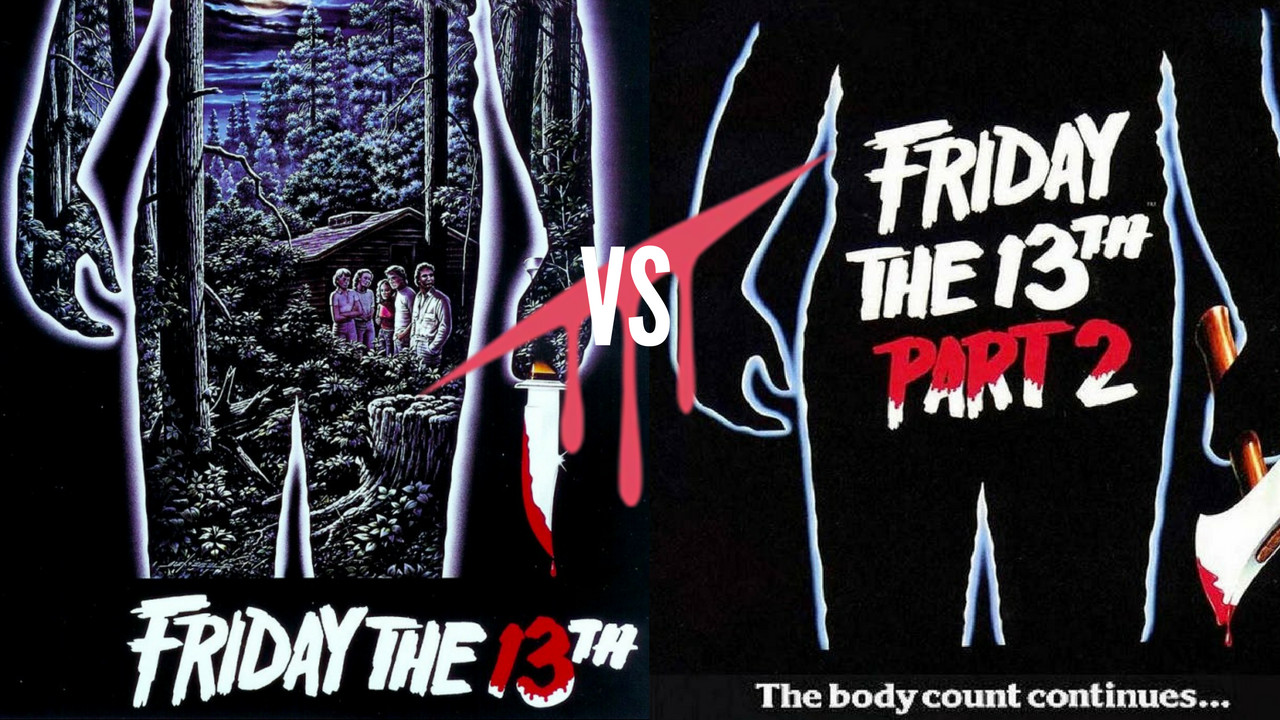 Friday the 13th is almost upon us, so what better time than now to pit the films against each other! Today, I’ve been tasked with pitting the one that started the entire humongous franchise off against the film that introduced us to Jason Voorhees! Yeah, a super easy job I have here…

How do we decide which film is better than another, when both films are pretty kickass? I mean, we wouldn’t even have a Friday the 13th franchise if it wasn’t for the original, but most people like Jason Voorhees, so don’t consider the first to be the best. Heck, most don’t even like the second film as Jason doesn’t have his iconic hockey mask yet. I’m not one of those people, as I quite enjoy the sack head look. Still, which film is better? Well, let’s break it down and see who comes out the winner.

Oddly enough, for a franchise that relies not just on violence, but nudity to sell tickets, the first film in the series is very tame. We see a bit of buttock and a tiny few glimpses of breasts. Unless you count nipples poking through shirts, there isn’t much to get excited about.

The second series decided that maybe a bit more nudity is a good thing, and sprung for some full frontal (well, more like full side) nudity. Sadly, besides those few tasty morsels, not much else is seen. Still, we have a clear winner in this category…

Comparing the first two films in regards to kills makes things a bit easier than, say, comparing the later films as they definitely amped things up when it came to kill scenes. A few highlights in the first movie involved an axe to the face, and of course, Kevin Bacon’s death scene involving an arrow. Finally, the end scene where Mrs Voorhees (spoiler!!) gets her head cut off is pretty memorable, but still not very creative.

Jason Voorhees decides to spice things up a bit and we get a few pretty creative kills. The highlights being a machete to the face of a poor man in a wheelchair, with so much force it shoots him down a flight of stairs. We also have the spear through two bodies and a bed (although, this we saw originally in the film Bay of Blood). I think if we factor in that bit of homage/stealing, the two films fare out the same. So…

The killer in Friday the 13th isn’t seen much until the very end, and when we do finally see them, it turns out to be a middle-aged woman. Neat surprise, but not very cool. Mrs Voorhees does love to set up bodies for some scares, so that’s pretty neat; however, her son also carries on that tradition in the second film.

Jason Voorhees, with his fancy sack and coveralls, makes for a cooler killer, even if he isn’t as cool as he will eventually become. Like I mentioned before, Jason loves to pay homage to Mommy by setting up bodies to scare people. Plus, he knows to take a kettle off the stove when ready. Jason, the safety-concerned killer.

The slow pan on the sole survivor drifting on the lake. The cops arriving, the soft music playing, and then BAM! A young deformed Jason Voorhees jumps out of the water to drag the poor survivor into the dark depths of Crystal Lake. Classic!

Scratching at the door, a cute dog waddles in, Paul is still around, and then BAM! A deformed Jason Voorhees jumps through the window, revealing his ugly face. Pretty neat, but doesn’t hold a candle to the memorable ending of the first film.

The film that set the template for the entire series. A group of counselors head off to Crystal Lake to fix it up, so it can be opened for the summer. However, a killer on the loose has a different plan and vows to keep the camp closed for good. Cue the rising body count. The first film surprised many when the killer was revealed to be a woman out for revenge, as she blames the counselors for her son drowning many years ago.

As pressure mounted for a sequel, with the killer from the first movie having no head, the idea to “resurrect” Jason Voorhees as the killer was neat but obvious. Also, the template for the second film follows pretty closely to the first film, hardly deviating from what worked before. Not a lot of originality points are given here, which means…

So, it seems we have a tie for the first two films in the series, and honestly, did we really think differently? Both films are very similar and both gave us something that would last a lifetime: an undying series thanks to the first film, and an undying killer thanks to the second film. Still, we need to have a winner and what better way to decide then basing it solely on my own useless opinion. Personally, if I had to decide which film to watch, I would pick Friday the 13th Part 2. Why? Because I love the menace of Jason Voorhees in this film and I love me some nudity.

Do you agree or disagree with this verdict? Comment below to tell us!