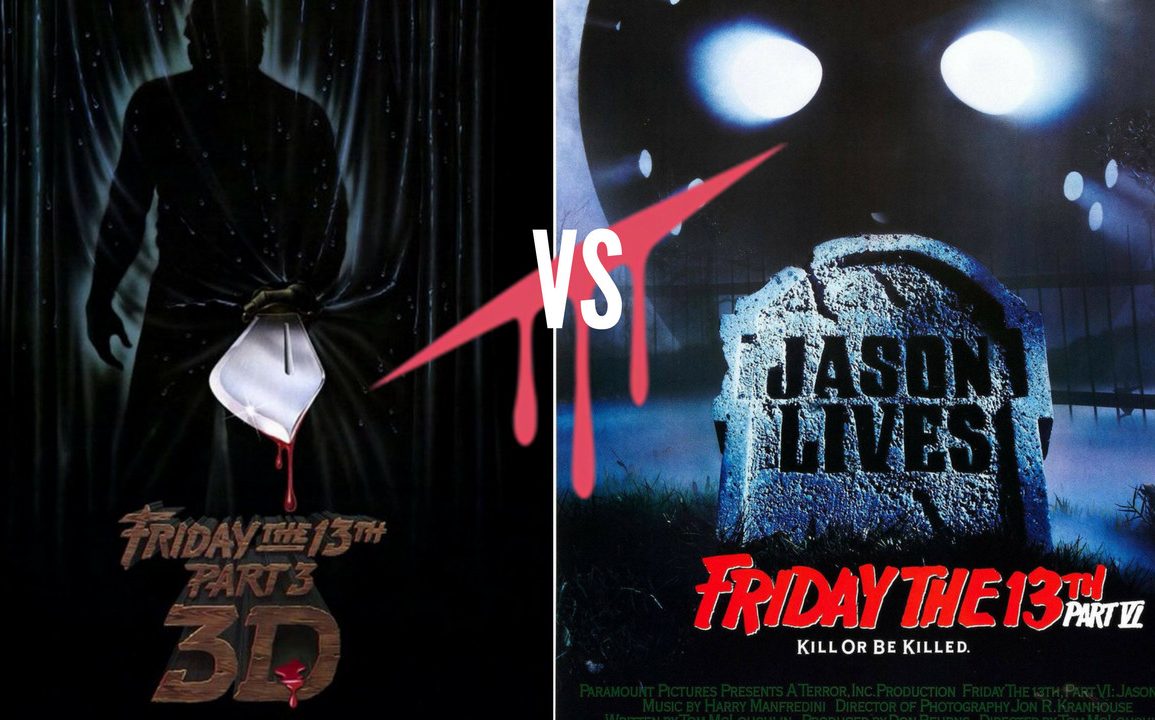 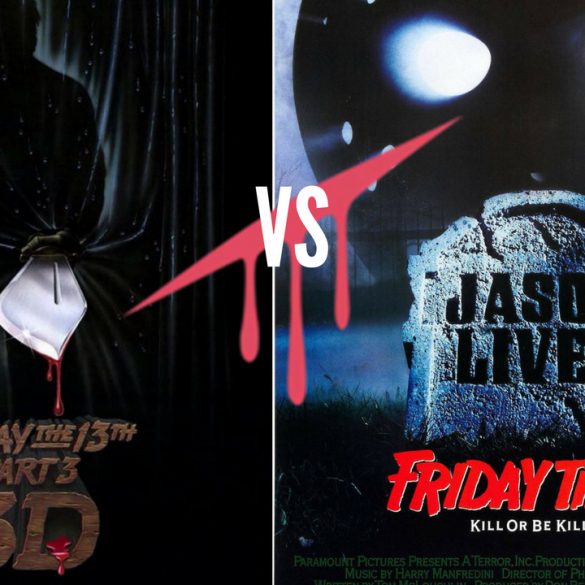 We picked Friday the 13th Part III and Friday the 13th Part VI: Jason Lives to battle it out together because they are both effectively starting over. Part III is forced to come up with an entirely new plot after the events of Part 2 that doesn’t have the good fortune of being able to copy the film before it; Part VI has its own difficult path of following a film that wasn’t actually about Jason Voorhees at all, with a different actor playing Tommy Jarvis. While continuity isn’t the series’ strong suit, both Part III and Part VI turned in different directions, and they have become some of the most beloved sequels; so let’s figure out which one’s better. We’re evil like that.

The third Friday film doesn’t feature a lot of nudity, but Tracie Savage does get to show off quite a bit. Throughout she’s featured in a blue bathing suit, and then later on she’s quickly featured in a sex scene in a hammock (props to the couple for making it work, because that seems uncomfortable as hell). After that she also gets a shower scene before her untimely demise where she bares breasts, with the camera shot often tastefully cut just above the nipple line – Steve Miner making sure Friday the 13th Part III remains artful.

Now here’s a huge, potentially life-threatening disappointment: Jason Lives has no nudity. NO NUDITY. If I could I’d deduct two points, but that’s not fair. Nope, alas we all have to suffer through a boobs-less film and take solace in Megan’s hip-hugging jeans.

Part III amps up the deaths with a number of interesting decisions. Some of my favorites include the handstand slice through the body, as well as Jason’s calm and collected speargun shot from across the shoreline. Rick’s entire head gets destroyed in an eye-popping sequence specifically meant for the 3D effects, and a familiar scene where Debbie gets a knife shoved through her neck. There’s a good mix of mundane and creative kills in this film, so fans of the series will find this a nice step forward from Part 2.

Probably some of the most impacting kills in Jason Lives include the first scene’s heart punch (poor Hawes, he knew it was all a bad idea!) and Garris’ brutal back-breaker; I mean, he literally gets turned into a pretzel. There’s also the paintball kill scene where Jason rips off a man’s arm and looks stunned at his own power (and, if he had a face, presumably beaming with pride). Other than these kills, though, Part VI features a lot of very generic machete deaths, and so I have to come to the verdict of

I’ve got to be honest, I don’t find Part III Jason very cool at all. It’s not Richard Brooker’s fault, but I do think it is the design of his character and the way that the film depicts Jason. While Jason doesn’t give off a lot of emotion here (and that’s intentional), he often seems somewhat bored, just going through the motions because his instincts tell him to do so. Also, I don’t love the bald back of Jason’s head or the dusty farmhand outfit he wears in this one.

Jason is definitely rocking some cool looks in this film, mostly because he comes back from the dead as a decaying zombie creature. The early Jason shots are awesome since he’s covered in flesh, dirt, and maggots; later on, he displays some vigor and personality, along with a distracted persistence that makes him seem like a dog being coaxed with a bone at times. Even cooler, though? Jason gives no shits about doors, he’ll just bust through the goddam wall.

Chris stupidly returns to a camp near Crystal Lake with her friends after she was nearly killed by a disfigured man in the woods previously; her friends then get slaughtered in all kinds of brutal ways while smoking weed and having sex, leading Chris to a life of insanity after she hallucinates Pamela Voorhees rising from Crystal Lake’s depths to pull her under. Yeah, Chris is going to be juuuust fine.

Tommy Jarvis accidental raises Jason from the dead when lightning strikes a metal rod Tommy foolishly shoved into Jason during a thunderstorm. Jason then proceeds to terrorize Camp Forest Green (renamed to dispel the bad publicity surrounding Camp Crystal Lake) when a new group of counselors – and this time kids too! – return for some camping. Tommy knows he has to stop Jason, but the damn sheriff Garris keeps stopping him.

My pick here is pretty arbitrary and reflects my own personal enjoyment of the films, but

Part III has the misfortune of getting sandwiched between two fairly important films in the series: the continuation of the saga with Part II, and the intended ending of the series with The Final Chapter. While Jason does get his iconic mask here and it also introduces some fan favorite characters like Shelly and Fox, there’s not a whole lot that stands out as truly important to the franchise besides the mask. The rest of the plot is pretty run-of-the-mill.

While Jason Lives also features a predictable plot, its requisite parts are much more important. Here Tommy Jarvis gets even more recognition as the guy that comes back to save the day, risking his life and liberty to warn everyone about Jason’s presence (as he should – he accidentally revived him). Also, Jason’s stronger, more vicious nature is present in Jason Lives with a supernatural element that will lead to Part VII‘s telekinesis storyline. Since these are much more prevalent in the series’ later sequels, I have to give this one to

I have a soft spot in my heart for Chris (Dana Kimmell); she’s super cute yet still a perfect virginal example of a Final Girl. Even though she does have what my wife calls the standard ’80s girl look, she stands out from the rest of the girls in the film because of her charm, and that’s all thanks to Kimmell whose other film roles (like Sweet Sixteen) also show her adorable side. She also tends to be a pretty strong character in this film, fighting back in an extended chase sequence at the end of the film.

Megan isn’t a memorable Final Girl simply because she doesn’t get a lot to do. She’s… good with the kids, I guess? It’s mostly Tommy Jarvis who is doing all of the work in this iteration, so Jason Lives technically has a Final Guy at the end of it all. Still, we’re counting Megan as the Final Girl and she barely does anything of substance, so we obviously have to give this one to

Do you agree or disagree with this verdict? Comment below to tell us!