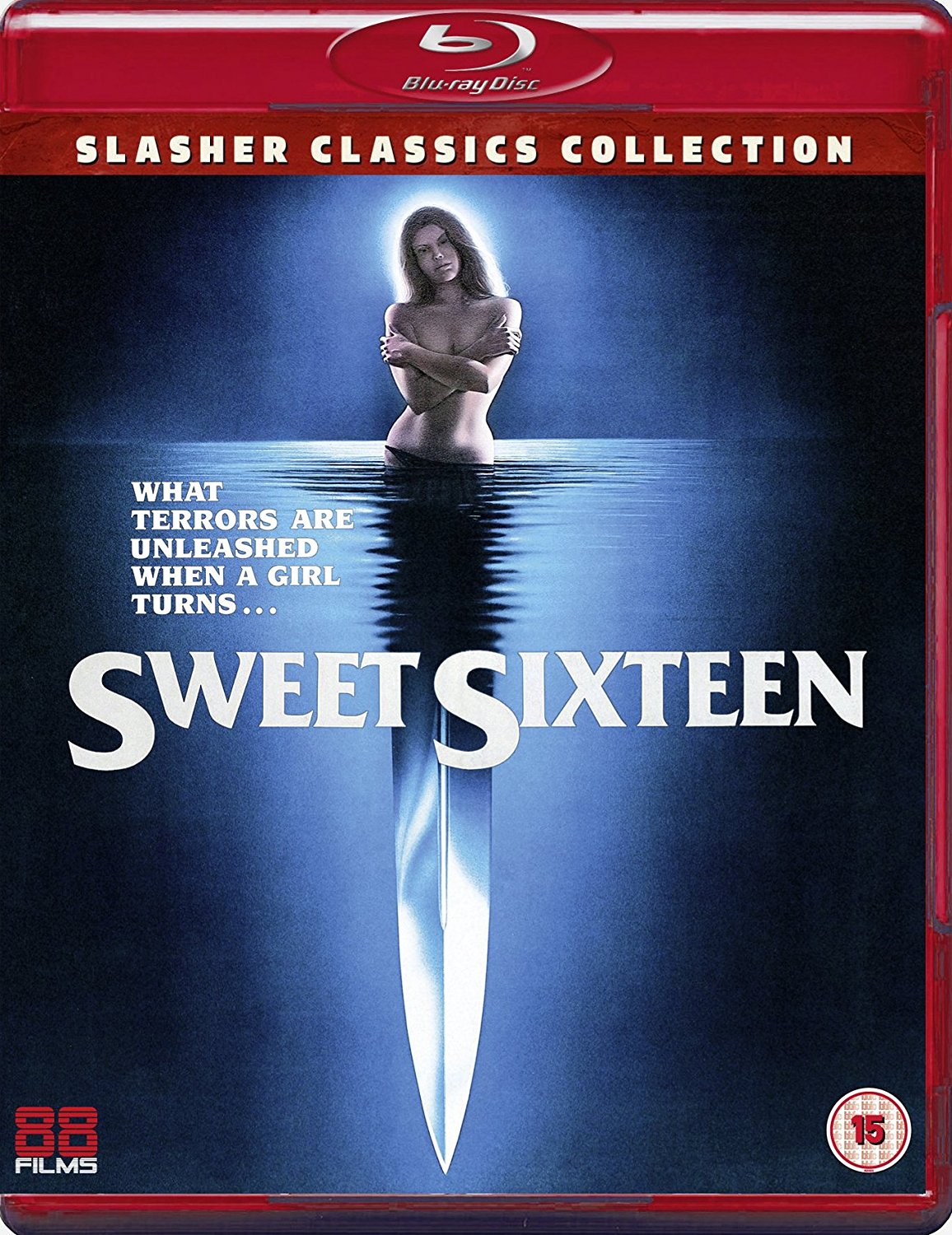 Sweet Sixteen Blu-ray Review (88 Films)
Sweet Sixteen might be a forgotten slasher, but it still has some interesting moments despite a fairly bloodless proceeding. 88 Films has provided a good HD transfer with some variable flaws and heavy grain, but it's definitely worth checking out if you have a Region B or region-free Blu player.
Film
Blu-ray
Reader Rating0 Votes
3.7

Melissa is the new girl in town, but it seems that bad luck follows her everywhere. Once she moves in, guys that she dates are the victims of a brutal killer, leading many to suspect that there’s a serial killer in town. But that’s too much of a coincidence, and Sheriff Dan Burke is on the case (propelled by his two sleuthing kids), uncovering a number of odd occurrences that leads to a psychologically-tinged reveal.

1983’s Sweet Sixteen, from director Jim Sotos, has a classic slasher setup. It involves young teenage kids, a small town, red herrings aplenty thanks to a scapegoat, centering around a specific day, with a final psychological twist to tie things together. It’s a perfect smattering of every single trope that made slasher films so popular at the time, and yet Sweet Sixteen plays out slightly differently. For one, it’s less violent than most of its brethren at the time, with a low body count. It’s also slower and much more procedural, with its focus drifting between the small-town sheriff Dan Burke (Bo Hopkins) and his daughter Marci (Dana Kimmell, fresh off of Friday the 13th Part III). These differences make it an interesting, if not integral, slasher of the time, and it almost comes to resemble a crime drama.

Sotos’ direction is somewhat fractured, mostly due to the early focus on new girl Melissa (Aleisa Shirley) before shifting to the Burke family and primarily Marci. Part of that is certainly due to star power: Hopkins gives a commanding performance and Kimmell was simply more popular at the time of the film, giving Sweet Sixteen a leg up on some of its competition because of her involvement in the third Friday. Still, the film makes good use of its sheriff protagonist, following Burke as he investigates a couple of murders in his small town with the only connection being Melissa herself.

While Sotos can sometimes get bogged down in the mundanity of the case, his depiction of small-town life and the locals’ particular racism towards Native Americans adds complexity to the film, especially when it makes Jason Longshadow (Don Shanks, pre-Michael Myers) a prime suspect. There’s the usual blend of cartoonish characters, like the town malcontents who cause mischief at every turn, but Sweet Sixteen offers a fairly strong look at prejudice and how those minorities can become the perfect scapegoat for blame.

As stated previously, the body count is low and Sweet Sixteen doesn’t have a lot of gore. Its few deaths mostly take place off-screen, and this presents a problematic pacing issue for the film; it’s a bit too slow, and it presents a tame viewing experience in comparison to other slashers of its time, which were beginning to push the bar and move into gorier territory.

This is partially why Sweet Sixteen isn’t widely remembered. It also doesn’t help that its ending is too rushed to spend much time psychoanalyzing the killer besides what’s provided as surface-level context. These moments seem like screenwriter Erwin Goldman took pieces of better films and tried to fit them together, resulting in a Frankensteinian creation that just barely works.

As a slasher film, Sweet Sixteen is fairly unmemorable, but some of its disparate elements help elevate it above the regular schlock of the ’80s. This is a film that requires a bit more patience than the cut-em-up-and-get-out slashers that, in 1983, were just beginning to make the rounds; still, Sotos provides some nudity, and just enough violence to keep hardcore horror fans watching. Sweet Sixteen is something of a lost slasher, but it’s worth a viewing to pinpoint exactly why that happened.

Sweet Sixteen is ultimately very lacking in the violence department, with quite a few off-screen kills and just enough bloodshed to categorize it as a slasher at all. This isn’t an area where the film excels.


Sweet Sixteen provides a conflicting nude scene: on the one hand, Aleisa Shirley is quite attractive and a full-frontal shower sequence is definitely welcomed; on the other, Melissa is supposed to be fifteen at the time, so this moment seems pretty weird. We can only take comfort in the fact that Shirley was actually 20 at the time of filming. (Collective sigh of relief.)

88 Films’ Blu-ray release of Sweet Sixteen is presented in 1.78:1 aspect ratio with an HD transfer. Probably the best word for the image quality is “inconsistent,” because the film often fluctuates from great-looking moments to some with fuzzy, heavy grain. During those good moments – most of the film, especially those moments in brighter lighting – the transfer features nice clarity, depth, with minimal damage spots. However, darker scenes do present damage and lots of grain that can obscure some of the picture; these are reminiscent of other aged ’80s sources, like the deleted scenes from Silent Night, Deadly Night, and I would venture to guess that most of these issues stem from a damaged source.

Interestingly, some of the special features do use footage from the film that don’t feature these grain issues, but I believe that that footage is thanks to DNR editing – despite some of the flaws, I prefer the grainy image over waxy, digitally-enhanced footage.

Sweet Sixteen was previously released by Code Red on Blu-ray in 2015, and looking at the screen caps from both films, this 88 Films release looks somewhat superior with a clearer image and some good color enhancement.  However, I have not seen the Code Red release in motion.

88 Films has given Sweet Sixteen an LPCM stereo audio track which sounds good, although there is an occasional hiss and, in one moment during dialogue between Bo Hopkins and Susan Strasberg, what sounds like some digital warble. Otherwise, this is a fairly good audio mix that, while unremarkable, provides a good way to listen to the song “Melissa” over and over again.

88 Films provides some new special features that are only available on this release – the previous Code Red Blu-ray had a couple of interviews that aren’t included here. The Hysteria Continues! podcast provides a running audio commentary – and as far as I can tell, this wasn’t an episode previously released by this group of cult comedians. Also included is a 13-minute interview with writer/critic Jim Harper (Legacy of Blood), who documents some interesting tidbits about the film and weighs in on the “Melissa” song debate (spoiler: he doesn’t like it, and I believe he uses the term “plinky”). There’s also reversible cover art which is effectively the same except removing the “Slasher Classics Collection” moniker and the rating certificate.

All told this is another fine release of Sweet Sixteen with a few extra features you can’t find anywhere else, plus a good – if sometimes inconsistent – transfer of the film. For those looking to finally see Sweet Sixteen, this is worth checking out so long as you don’t own the Code Red Blu-ray. If you do own the previous version, it’s hard to say whether this is worth double-dipping.