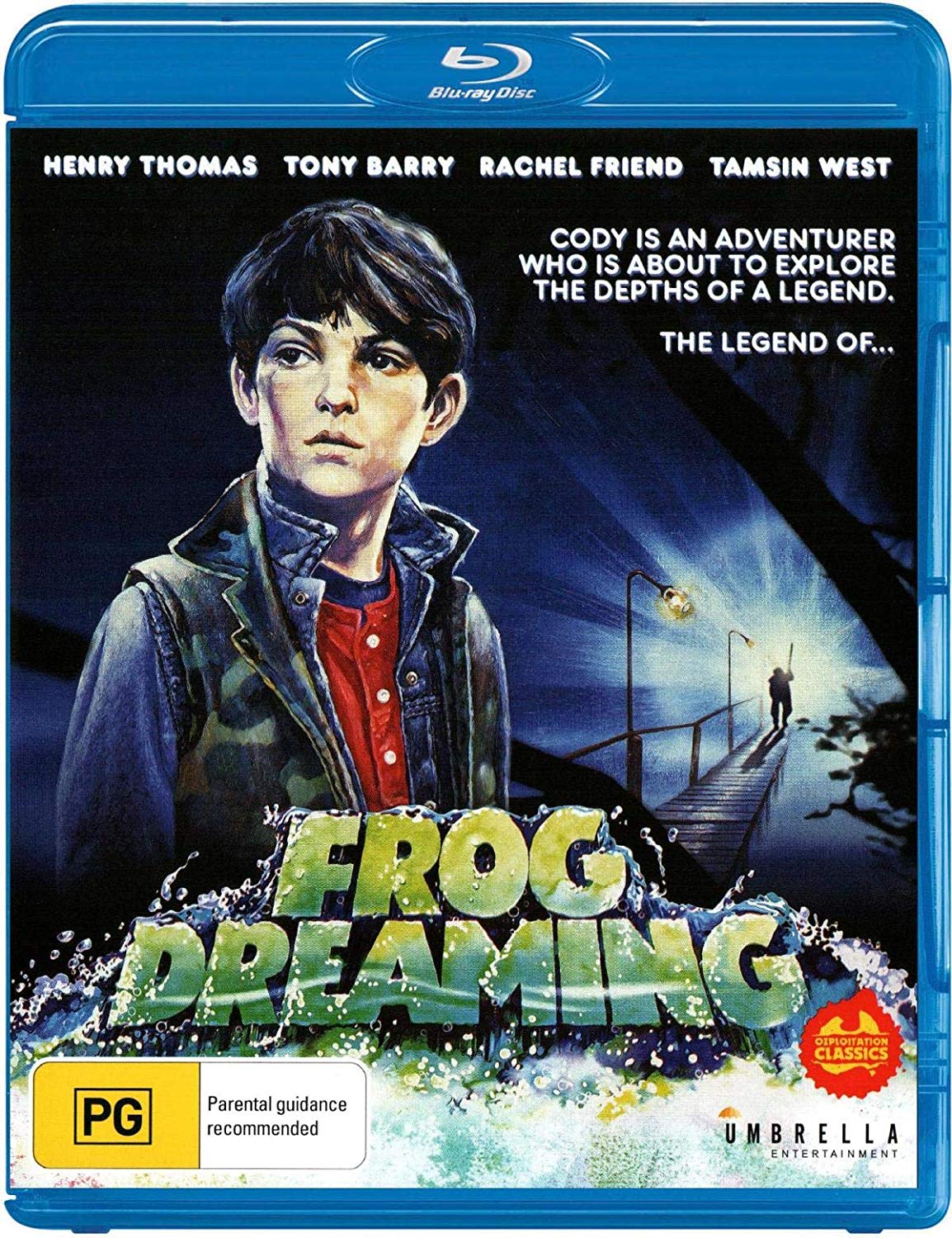 Frog Dreaming is an adventure with unexplained events that will frustrate, but it is still a damn fine time. Umbrella Entertainment has released a premium Blu-ray worth owning.
Film
Blu-ray
Reader Rating0 Votes
4.6

Frog Dreaming is one those classic 80’s flicks that have a kid or kids going on adventures, never really in danger, and always ending up having a blast and getting the girl or boy in the end. Basically, a film that any kid growing up would love to live.

In Frog Dreaming, we follow one of those kids, named Cody, played by a very young Henry Thomas, who discovers a dead body near a lake, which may house a monster known by the native folk as a Donkegin. Cody seeks out answers on his own, getting help from all sorts of local natives, most notably Charlie Pride, who tells him that to be a man, he must look the Donkegin in the eyes. Cody may or may not exactly believe that it’s a Donkegin under the water, but that doesn’t stop him from using his cunning and intelligence for diving into the dark depths of the lake and figuring out exactly what is disturbing the waters.

Frog Dreaming is directed by Brian Trenchard-Smith, who, on the special features of the Blu-ray, quotes this as being his best film. Although I don’t agree with him (I adore Night of the Demons 2), he most certainly has crafted a fun adventure, with only a few faults. The faults of Frog Dreaming come into play near the end, where events unfold, but nothing is explained. Seriously, all sorts of unexplained things happen, and we are just meant to accept it and move on, but that is not a wise way of finishing this adventure off. Even a tiny bit of information would have been good; instead, the film jumps from one unexplained event into an even stranger unexplained event. I guess we are supposed to see Frog Dreaming as a sort of mystical tale that happens for reasons we don’t need to know.

Even though the film doesn’t explain a thing, we do still get to enjoy a fun quest (the film was known as The Quest in North America), with a solid performance from Henry Thomas, the cool kid that everyone loves. Seriously, if I watched this movie as a kid, I would have walked into school the next day wearing a jean jacket and trying my darndest to be just like Cody. Instead, I was just an ordinary loser, all because I didn’t get to see this movie as a kid. Man, what my life would have been like if I had…

Umbrella Entertainment takes the honours of being the first to release Frog Dreaming on Blu-ray (and DVD for you weirdos that haven’t upgraded yet), and the results are fantastic. Although I am unable to find any information on what or where the transfer for Frog Dreaming came from, that needn’t worry you as the film looks phenomenal with no issues creeping their nasty heads up. Audio has been presented in DTS HD Master Audio 2.0, and the same that was said about the video applies here as well, solid all around.

Extra Features are plentiful, with an audio commentary with director Brian Trenchard-Smith, editor Brian Kavanagh, costume designer Aphrodite Kondos and Not Quite Hollywood Director Mark Hartley. For people who would rather watch interviews, we have extended interviews from Not Quite Hollywood. There is also a new feature titled The Depths of a Legend: Looking back on Frog Dreaming, which features director Brian Trenchard-Smith interviewing Henry Thomas. It runs 28-minutes and ends on a sweet note as Trenchard-Smith and Thomas watch a clip from the movie with big grins on their faces. We also get a new feature titled The Go Kids, which features interviews with Rachel Friend and Tamsin West, who played Wendy and Jane respectively. The feature runs roughly 17-minutes. Another feature that runs approx 5-minutes is a look at the filming locations. Rounding everything out is a theatrical trailer, image gallery, and a reverse sleeve with The Quest artwork used.

Frog Dreaming frustrates me, as I enjoyed the adventurous spirit of Cody, and all the shenanigans he enjoys. However, the unexplained ending(s) left a sour taste in my mouth. Nevertheless, the bitter taste isn’t enough to not recommend giving this movie a watch, and with Umbrella Entertainment’s Blu-ray, you’ll be owning a premium release.

Be sure to check out our gallery for more extensive screenshots from this release.