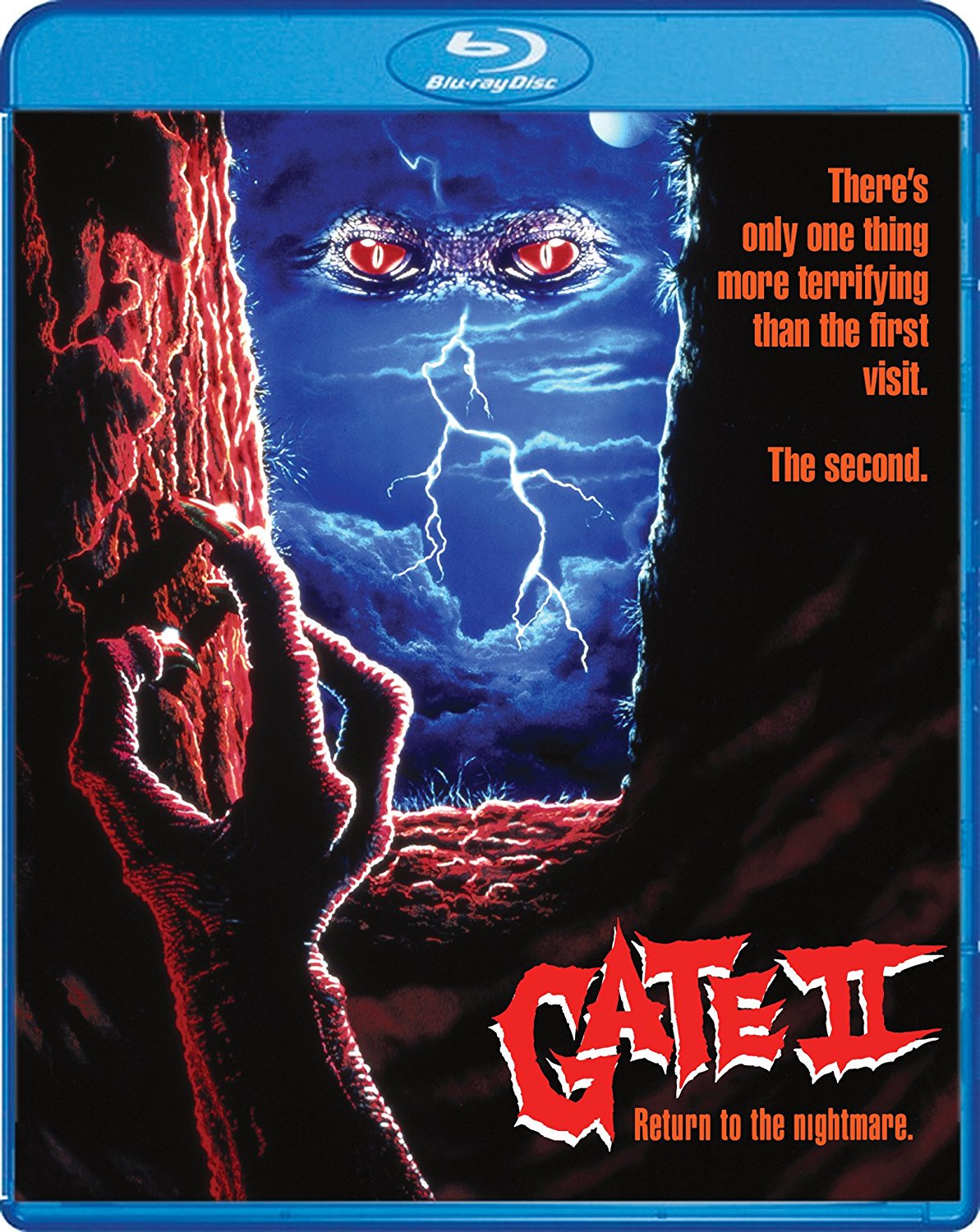 Terry, the precocious kid from The Gate, is back and dealing with his own family demons; his dad’s an alcoholic and he was recently fired from his airline pilot’s position, and he also attempted suicide due to his failures. Terry sets out to open the Gate once again, this time wishing for a better life for his father. Unfortunately, all of these wishes help three powerful demons make their way into the real world, and if Terry doesn’t stop them, they’ll conquer this universe too!

Tibor Takacs’ 1987 film The Gate was a surprising success, especially considering its low budget. Its PG-13 rating and kid-centric plot made it a friendly horror film for viewers of most age ranges, and it had the right amount of humor and scares to put it in a category relegated to films like Gremlins and Ghoulies. Gate II was an attempt, three years later, to craft a sequel to a fairly well-received genre film; Takacs, writer MIchael Nankin, and co-star Louis Tripp all came back for the event, making it a direct successor in almost every way. On paper, it seemed like Gate II could capitalize on the original’s popularity.

However, Takacs’ film takes a different approach to the storyline. Terry (Tripp) is a bit more grown up here as a depressed teen battling some family issues in the home, and he’s turned back to demonology to hopefully get something from the power of demons from the other side of the Gate (and he apparently didn’t learn his lesson from the first film). Accompanying him are love interest Liz (Pamela Segall, better known now as Pamela Adlon and definitely recognizable), street bully John (James Villemaire), and his dorky friend Moe (Simon Reynolds). Reciting an incantation, they bring a minion into the world, and Terry quickly realizes that he can make wishes on the minion to get exactly what he wants.

Gate II has a decidedly different approach to demonology than its predecessor, diving more into the actual nuances of opening the Gate rather than the first film’s accidental foray into black magic. The themes change a little bit with the wish element; there’s a strong, nearly outspoken, metaphor about wishing away life’s demons, and with those wishes come consequences. It’s a concept that helps bring some emotional weight to Terry’s predicament – not only does his wish for his father to get better backfire, it also causes him to slip into a coma after a plane crash – but it also makes the film more convoluted than the first, especially since the ways the Gate is opened don’t really match.

Gate II relies on a lot of explanation, and that slows the plot down quite a bit. Takacs’ direction doesn’t have the immediate draw of The Gate, nor does it ever really get to that level of entertainment. In fact, Gate II‘s humor lacks emphasis besides Reynolds’ contributions, giving the film an uneven tone that’s never truly defined. Likewise, the finale itself – when the demons begin to physically manifest in the living world through those who have made wishes – doesn’t make a whole lot of sense. Nankin does the best he can to pull some of these elements together, but Gate II can’t quite achieve cohesion with what’s presented on-screen. It’s kind of a mess.

Still, those who enjoyed The Gate‘s demon concepts will find more to like here, and some of the special effects work is quite good – especially John’s transformation from punky kid to pustulent, oozing demon. It’s also clear that the effects required a lot of framing consideration and mathematical prowess, as all of the work was achieved by using a real person in the minion costume.

While Gate II pales in comparison as a sequel, it’s still a fun film that even more closely resembles it brethren Gremlins and Ghoulies (at one point the characters even call the minion a gremlin). Its lack of cohesive storytelling is frustrating, and its direction is not always smooth, but horror comedy fans will enjoy most of Gate II without thinking about its flaws in the finer details.

Despite its R rating, Gate II is not overly violent. There’s a great pimple-popping scene, though, as well as some vomited blood. Besides that, the violence is pretty cartoonish.

Nothing to see here, folks.

Gate II is NOT a Scream Factory Collector’s Edition release, but it sure gets treated like one. The film gets a new 2k transfer of the interpositive, and it looks surprisingly good for its age. Colors are well-represented (especially reds, making a number of appearances), skin tones look even, and there really is no visible damage. One issue I did have was that the blacks in dark scenes seemed a bit too dark and shadowed some of the detail, but other than that this is a great transfer.

Gate II gets a 2.0 DTS-HD Master Audio track and it sounds good, with lots of ambient sounds interspersed with the usual dialogue. No drops noticed, and the dialogue is crisp and clear. English subtitles are also included.

Scream Factory has assembled two surprising features for this Blu-ray release. The first is a round-table discussion style interview with Tibor Takacs, Michael Nankin, and VFX creator Randall William Cook. All three sit down to talk and share memories of their experience working on the film, which all seem to agree was much more difficult than the first movie – especially because their budget was considerably reduced despite The Gate‘s success. This lasts about thirty minutes and features a number of great stories and reveals about how some of the visual effects worked. The second interview features make-up effects artist Craig Reardon in a sit-down chat, who discusses the projects he worked on for the film (two of the demons primarily) and, again, the issues on-set with time constraints. This is about 14 minutes long.

Along with the new extras are the usual fare: theatrical trailer and still gallery, and reversible cover art with alternate artwork from Gate II. One cool addition is a tape promo that was distributed to video retail stores asking for the stores to encourage patrons to check out Gate II. By listening to the tape, you had a chance to win $1000 (and unfortunately, no one watching this Scream Factory Blu-ray will be a winner). It’s a nice inclusion highlighting some marketing schemes from a bygone era.

This release is quite nice, and fans of the film will definitely want to own Gate II on Blu-ray.