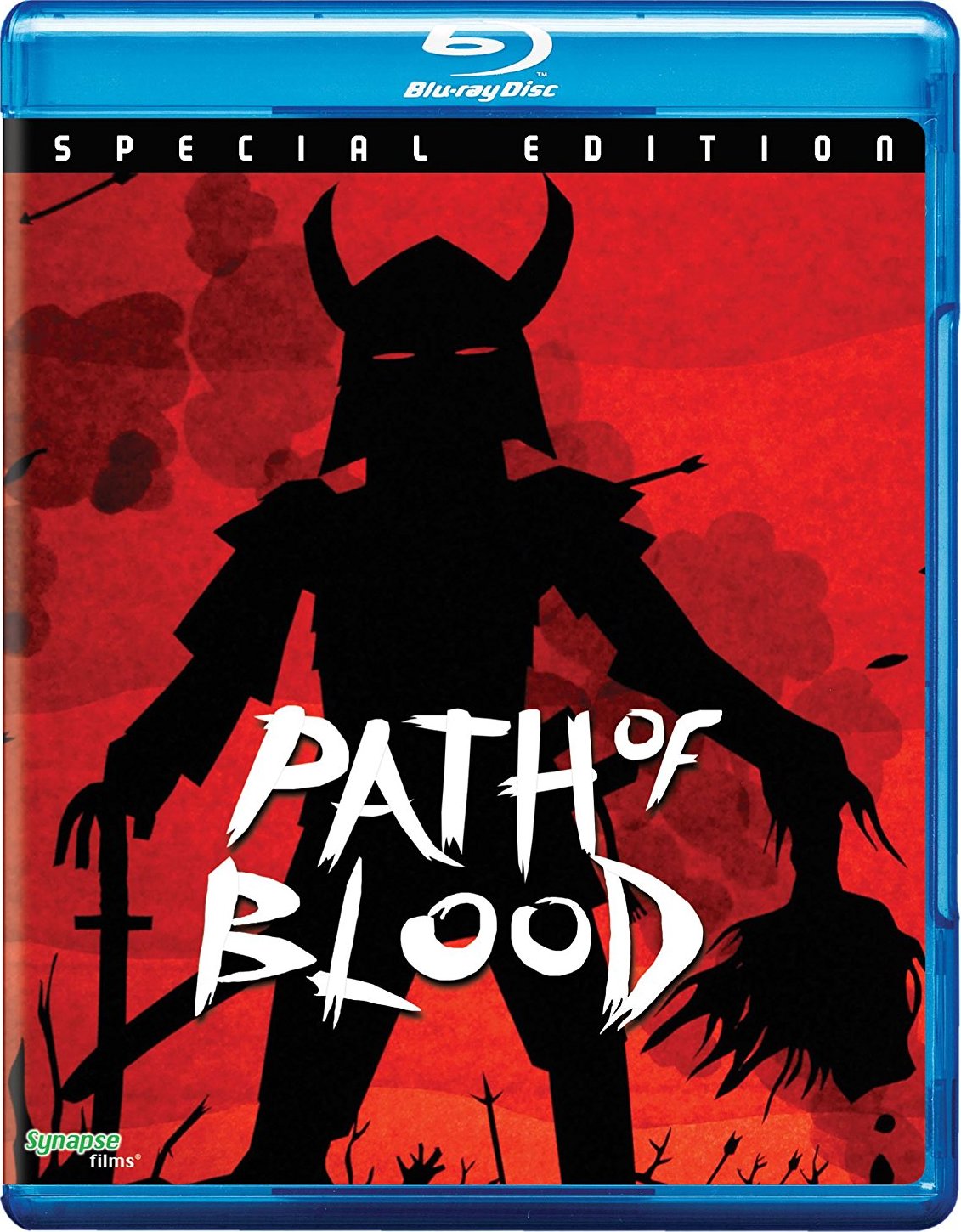 PATH OF BLOOD Review (Synapse Films Blu-ray)
Verdict
Path of Blood is a fun samurai film with a great premise: cut-paper animation, an obviously time-consuming passion. This Synapse Blu-ray has an excellent making-of featurette and enough small extras to make this worth picking up.
The Good
Cut-paper animation is beautiful
Great amount of extras on the disc
The Bad
Plot is the film's weak point
9
Excellent
Buy
Amazon

Path of Blood is a cut paper animation film from Eric Power, a full-length (hour long) samurai/ninja storyline that takes the concept of an original short and turns it into a sprawling experiment in what paper can do. The film is inspired by classic samurai pictures (Power cites Lone Wolf and Cub among others in his making-of video) and was made on a very low budget, with Power forced to take breaks to work on actual paying jobs just to support the film’s production.

The result of all of this hard work and dedication is quite impressive. Power gives viewers a compelling plot about a wandering samurai named Kazuo (Kenji Kiuchi) who teams up with a couple of other ronin on his adventure, only to find that his trek to the Path of Blood is fraught with ninja fights and what could be considered a final boss battle. Path of Blood follows a fairly generic formula for samurai films, and it never really gets more complex than what one might find in a standard ronin anime series; its weakest aspect is the plot itself, which is sufficient but lacking some crucial elements of rising action development. The reasons for this become even clearer during Power’s making-of featurette because he reveals that there was no storyboard for the film, and that is reflected since the film at times lacks direction.

But the story isn’t a huge detraction thanks to the rest of Power’s animation, with some stunning graphical achievements including different types of stylistic shots and immense attention to detail, especially considering the film’s high-foliage setting. It’s even quite gory for a film made with paper, and Power recreates the epic fight styles of classic samurai film – including the slow-motion slicing and dicing and also some more cartoonish displays of violence.

Path of Blood is commendable because of its experimentation, and Power’s devotion to cut-paper filmmaking is profoundly apparent. This is a movie where the actual production is most striking, with the plot taking a backseat to the complexity of the movie-making process; it’s also a great ode to the samurai style that many film fans love. Anyone with an affinity for those samurai classics or more contemporary anime should absolutely check out Path of Blood.

Synapse Films has given Path of Blood a Blu-ray release after its prior release in 2013. The film itself looks good, and no obvious transfer issues can be found – ultimately, it looks as expected from a cut-paper animation style. Sound is also good with a 2.0 DTS-HD Japanese audio track; no issues here and the voice actors do a nice job. English subtitles are included and they’re styled based on the character speaking the dialogue, which I really liked.

The extra features include a making-of featurette made by Eric Power that runs about 10 minutes, where he dives into exactly how Path of Blood came from a short to a feature-length film. It’s a great watch and it shows how much detail is required in a cut-paper project. The original short film is also included; it runs 4 minutes and has all of the elements of the full Path of Blood, just at a smaller scale. A cool video game-style trailer is included that was used for promotion, and it’s a really awesome way to promote the film’s concept without needing a ton of footage from the movie itself. A regular trailer is also included, plus an image gallery.

Overall, this is a nice Blu-ray release that the aforementioned fans of samurai cinema should definitely enjoy, and the extras really do add interesting bonus content to this package.