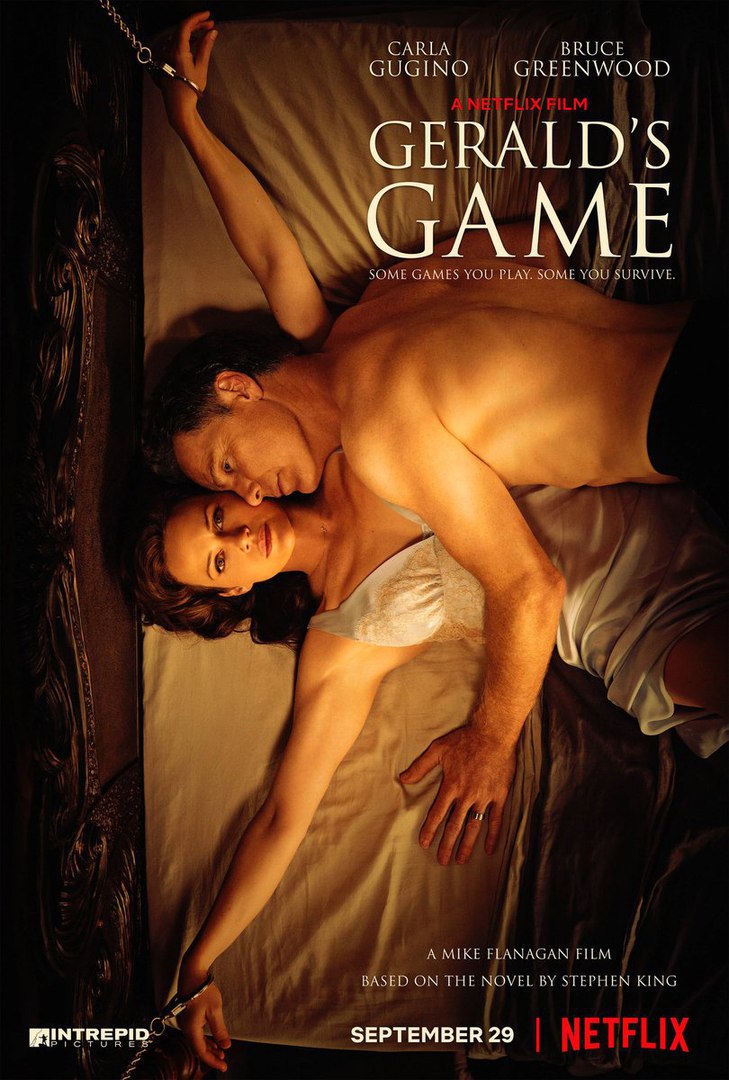 Gerald and Jessie are hoping for a sexy weekend getaway to rekindle their marriage after some tough times, so they head out to an isolated lakehouse. Gerald’s looking to spice things up even more, so he grabs some handcuffs and lashes Jessie to the bed during their sexcapades. Unfortunately, Gerald’s Viagra meds kick in and cause a heart attack, leaving Jessie still chained to the bed and forcing her to escape from her shackles (both literally and figuratively).

What do you get when you combine two people who are having really great success? Gerald’s Game indicates that a mashup like that generates yet another excellent venture. Both Mike Flanagan and Stephen King have been triumphing of late: Flanagan with a number of solid horror movies like Ouija: Origin of Evil and Hush, King with a seemingly endless number of film adaptations based off of his stories and novels. Gerald’s Game, a Netflix original directed and co-written by Flanagan and Jeff Howard, is a surprising decision for film, though; the original story’s singular locale doesn’t exactly suit a 90 minute movie, especially when most of its scenes involve only one character. Flanagan, however, manages to follow King’s novel quite closely, and he makes the most of the main character’s monologues and eventual hallucinatory dialogues between herself and her psyche.

The film begins with Gerald (Bruce Greenwood) and Jessie (Carla Gugino) setting up for a romantic sabbatical at an isolated lakehouse. There’s champagne, there’s Kobi steak, and there are Viagra pills; there’s also a rape scenario that Jessie’s not ready to partake in as Gerald pulls out the handcuffs and begins enacting his fantasy. Here, even before the real thrills of the film are revealed, Flanagan captures some of the main themes of many of King’s stories: despite everything we know about a person, we can’t know it all. Deep inside, a secret remains that could change a fairly innocent-seeming man into a monster.

That aspect of monsters comes out to play after Gerald dies, leaving Jessie chained up to bedposts and unable to get free. Experiencing something of a mental break, Jessie relives her own past experiences and childhood sexual abuse by her father, transported back to a time when she was manipulated into keeping quiet about the trauma. Flanagan draws attention to these metaphoric shackles without voicing it explicitly, and Gerald’s Game works best when its flashbacks depict Jessie’s horrifying childhood rather than speaking about it.

The film’s singular location is handled quite well, with a phantom Jessie and Gerald appearing throughout for Jessie to have an outwardly-manifested dialogue, almost like an angel and devil on her shoulders. Gerald’s Game‘s script is a bit heavy on the exposition, however – a necessary evil for sure, but one that tends to drag the film’s otherwise-suspenseful moments down. Flanagan does an excellent job of showing how torturous Jessie’s scenario really is, and Gugino’s reactions to painful situtations are often tense and grimace-inducing. But elongated moments of dialogue slow the pacing at times, one of the film’s biggest flaws – albeit a difficult one to address due to the plot.

However, Flanagan’s focus on the supernatural aspect of the film – the Moonlight Man (Carel Struycken) – is the film’s outstanding accomplishment because it is also one of the most defining parts of the theme. The Moonlight Man visits Jessie at night, holding out his bag of trinkets as though he’s Death coming to collect something. However, Jessie later learns that the Moonlight Man isn’t some paranormal manifestation but a real person, not a monster but a man. He’s a symbol of the world’s reality – the real monsters are human, and they can be beaten. In Jessie’s case, the Moonlight Man is a metaphor for all of the monsters in her life, and she’s able to overcome them with just one powerful sentence: “You’re so much smaller than I remember.”

Gerald’s Game is particularly comfortable with the King story and manages to capture the essence of that plot while converting it into a surprisingly agile film. Flanagan does his part with pacing, and though it sometimes does get bogged down in the monotony of spoken exposition, both Gugino and Greenwood help to temper that with excellent performances. Both those who have read Gerald’s Game in the past and those who have not will enjoy this nuanced, symbolic representation of a woman breaking free from her binds.

While Gerald’s Game‘s primary focus is not violence but more psychological torsion, the film does feature a number of gruesome scenes including a dog eating dead flesh and Jessie pulling a large portion of her hand skin off when wriggling free of her cuffs. That will almost certainly make audiences cringe.

Carla Gugino spends almost the entire film in a sexy blue nighty. A large portion of the film also finds Bruce Greenwood shirtless in his briefs.