Go LIVE with Zak Bagans and the Ghost Adventures crew 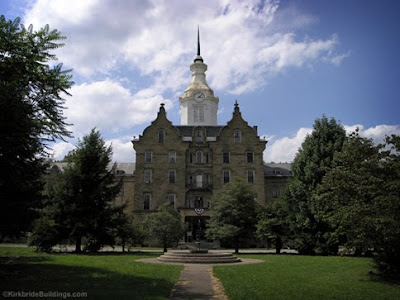 Even in daylight, that is one foreboding place.

On October 30th, Ghost Adventures will be having a live 7-hour investigation of the Trans-Allegheny Lunatic Asylum in Weston, West Virginia. The Travel Channel’s site states about the asylum:

“Built during the Civil War, the asylum is the second-largest hand-cut stone building in the world. For decades its thick walls housed the insane, the neglected and the unwanted. Violence was a common occurrence and inmates were often subjected to brutal treatment. Shut down permanently in 1994, this massive edifice has remained vacant ever since.”

Asylums are always particularly creepy because they housed so many troubled individuals, and if there’s one thing ghost hunters can agree on, it’s that troubled humans many times become troubled spirits. I’m a huge fan of ghostly encounters, but I know I would never take my chances alone in an asylum or prison ward. They look and feel very malevolent.

But Zak, Nick, and Aaron are up for the challenge, and will interview locals and explore the nether regions of the asylum. One interesting place is the tuberculosis clinic; I’ve heard accounts of hauntings from other tuberculosis areas, so it seems as though these places of pain and suffering are very common for ghosts.

The show starts at 8 PM and runs until 3 AM, so make some popcorn, get your critical eyes ready, and take a step into the Trans-Allegheny Lunatic Asylum with Ghost Adventures. There’s even a countdown on the Travel Channel’s website.