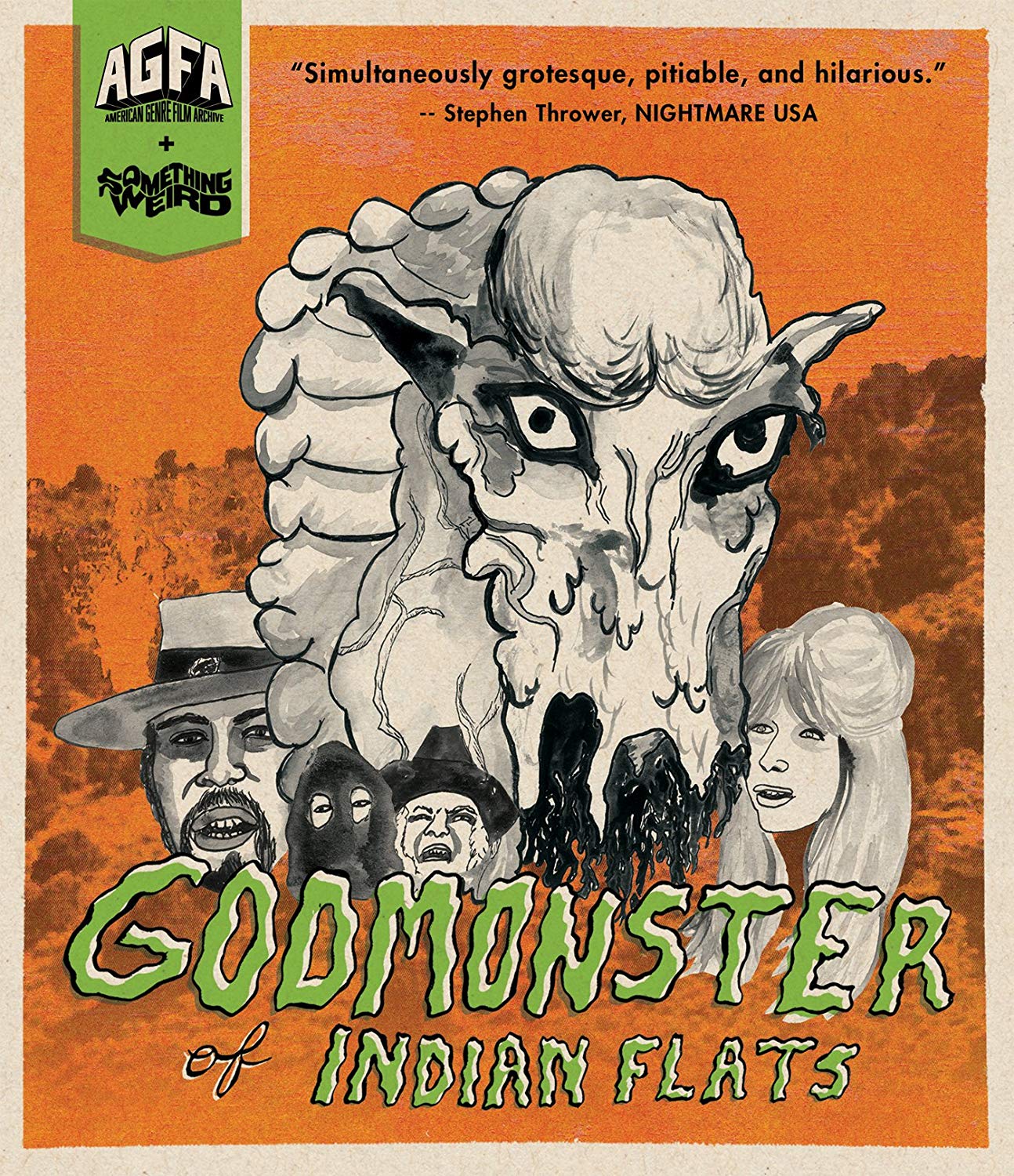 It's hard to recommend this Blu-ray to anyone other than big fans of super weird films; Godmonster of Indian Flats is certainly not good and not for everyone. However, the transfer on this release is fairly good (especially considering the source) and there are enough extra shorts and a full-length film to warrant a purchase for those die-hard fans.
Film
Blu-ray
Reader Rating2 Votes
3

A strange embryo shows up on a sheep farm and local mad scientist Prof. Clemons wants to study it. Nearby, a mayor struggles to hang onto his Wild West frontier town when a black man wants to buy it from him for $10 million. The two come together in an unlikely event where the embryo transforms into a sheep monster and starts a rampage around the city, leading to the destruction of this quaint western town. It’s all really strange.

Godmonster of Indian Flats is an odd beast of a film. It was the last of writer/director Fredric Hobbs’ film output in 1973, and it tells the story of a western-themed town, a mad scientist, and a mysterious sheep monster born from the phosphorous gases surrounding the area emanating from mine shafts. These elements don’t seem to align, and in fact they generally don’t throughout this 88 minute film; Hobbs has a lot of ideas – some of them unique, some of them so wacky that they don’t make any sense – and ultimately Godmonster of Indian Flats is a mashup of storylines that seems like the director was simply cramming plot wherever he saw fit. The result is a very strange, often terrible movie – one that sits well in the canon of bad film, though the entertainment value will need to be decided by the audience.

The film follows the scientist Professor Clemons (E. Kerrigan Prescott) and his assistant Mariposa (Karen Ingenthron) after they find a strange embryo pulsating on a sheep farm. Clemons is, apparently, an expert at detecting the otherworldly, because he barely sees the embryo before determining it’s some strange miracle, taking it back to his lab to perform tests. Very near Clemons’ lab is a town that has been converted into the Wild Wild West, where its residents have basically adopted all of the facets of a John Wayne film, from the dress to saloon brawls and shootout reenactments. In this storyline, the Mayor (Stuart Lancaster) is determined to make sure that Barnstable (Christopher Brooks), a black hired man, can’t purchase the property.

How do these two elements relate, you might ask? They don’t, at least not throughout nearly two-thirds of the film. At times Clemons might come in contact with the Mayor’s second in command Maldove (Steven Kent Browne), but for the most part Hobbs allows these two subplots to carry on opposite each other, briefly cutting back and forth between them for no apparent reason. This feels like two films slammed together into one: one a boring western with all of the worst qualities of a ’60s-era Wayne caper, the other a boring mad scientist film about a sheep monster. The thing is, Godmonster of Indian Flats is actually pretty well-written, with good scientific explanations for the mad science plot and some interesting looks at race relations in western town. But neither of the two work very well in conjunction with the other, and the film often struggles to find any forward momentum.

It all comes to a culmination at the end when the sheep monster escapes, but Godmonster sort of just ends despite finally getting to some compelling storytelling. It’s hard to really recommend the film even to the “so bad it’s good” crowd – while viewers might find some of the scenes hilarious in their ridiculousness (like a dog funeral complete with small white coffin), the majority of the film is filled with a whole lot of nothing happening. And Godmonster of Indian Flats takes itself pretty seriously, too, so there’s nothing overly comedic about the offering – and it’s got some pretty good acting, too. Really the whole thing is a headscratcher, leaving the viewer wondering about Hobbs’ intent, or perhaps whether this could have been split into two more interesting short films a la the other garbage shorts featured on this AGFA/Something Weird Blu-ray.

There’s not a lot of violence here, although the most difficult thing to stomach is the special effects work on the Godmonster.

None. A woman puts some money in her cleavage.

AGFA and Something Weird have done a new 4k scan of Godmonster of Indian Flats using a 35mm theatrical print, with a 1.35:1 aspect ratio. The quality of the last surviving print is obviously suspect, and so the film’s picture quality varies wildly throughout the running time. Most notable is the damage to the print; there’s rarely a shot without some kind of major debris, including lines through the picture, cigarette burns, and various damage marks. However, the clarity itself is quite good, with minimal grain present and nice crisp picture. Darker scenes tend to lose clarity but other than that, this is as good as it’s going to get for Godmonster of Indian Flats and fans should be happy with the results of this new 4k restoration.

Audio featured is a DTS-HD MA 2.0 mono track that sounds pretty clean except for a few occasional hissing spots. The soundtrack is bland and uninspired, so the 2.0 mono doesn’t really reveal any interesting things in the film’s sound; still, it’s relatively damage-free. There are also subtitles available.

Bonus features for this disc include three film shorts: Strange Sightings, about UFOs; School Bus Fires, about school bus fires; and White Gorilla, about a white gorilla. Also a nice addition is the full length feature The Legend of Bigfoot, which has been given a new 2k scan for this Blu-ray. The film itself is quite boring – a documentary in the style of The Legend of Boggy Creek – and the 2k scan does have quite a bit of damage similar to Godmonster of Indian Flats. Still, this is a cool extra to give more incentive to pick this up. Also included are some monster trailers. One notable thing missing here is an audio commentary; Rifftrax did a commentary on this film and it would have been a great addition to this Blu-ray.