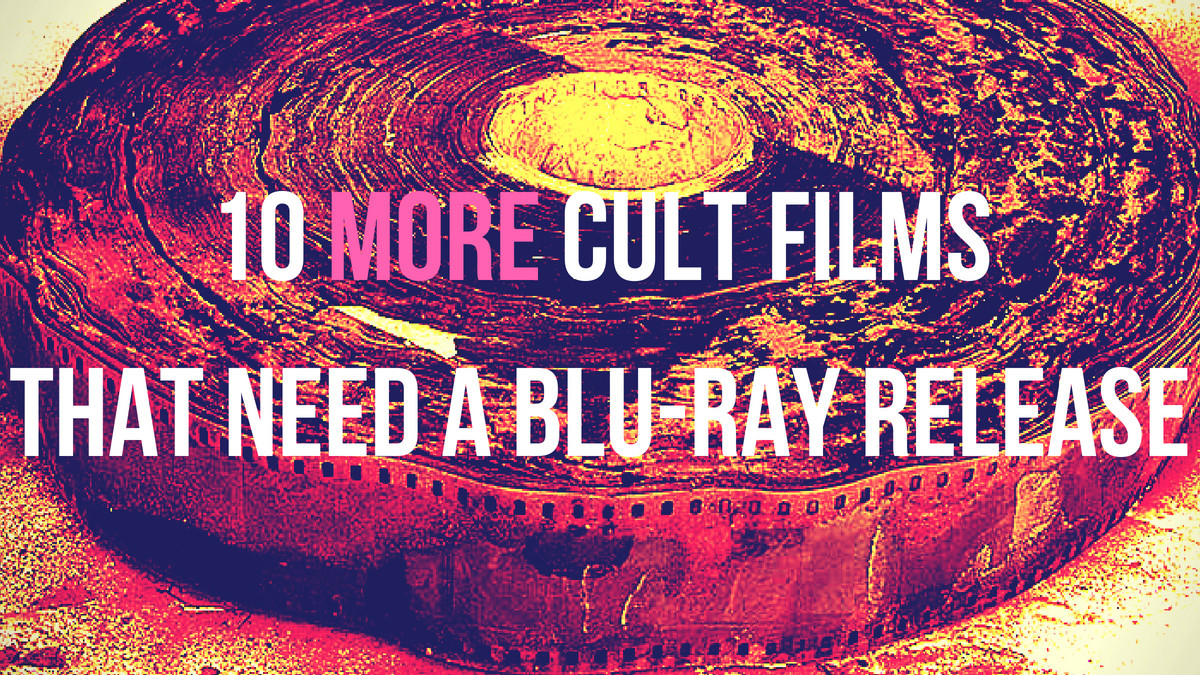 Almost a year ago, we posted a list of ten cult films that could use a Blu-ray release. Now, most of those films have actually gotten a Blu-ray thanks to the popular boutique labels, so it’s about time we pick ten more to give the labels some ideas! Michael and Ryne pick five films apiece that they think are really due a quality release, and importantly, these have never had a Blu-ray release at all – not even a crappy bare bones one. That’s the criteria, so let’s see what we can come up with.

We love blaxploitation films here at Cultsploitation, but unfortunately we don’t get to cover a whole lot of them since many of them haven’t gotten a recent Blu-ray release (with Vinegar Syndrome being a prominent exception). Last time we picked Black Shampoo, which is still sadly lingering away somewhere without a quality Blu-ray; this time, we want to see Black Samurai get some love. Based on a series of pulpy novels by prominent crime writer Marc Olden, Black Samurai has very little in common with the books themselves. Instead, it is effectively a blaxploitation film with a wuxia bent starring Jim Kelly from popular action martial arts films Enter the Dragon and Black Belt Jones. Look, Black Samurai never got any love and it doesn’t particularly deserve it either, but anything with a black samurai has to have an audience, right?

Also known as Rain of Fire or Lucifer’s Curse, this weird film (also from 1977) starring Kirk Douglas centers around a man working at a Middle Eastern nuclear complex who finds out that his son is the Antichrist, Damien style. The film is directed by Alberto De Martino, the man who brought us the gloriously boring poliziotteschi film The Man with Icy Eyes and a number of Italian sword-and-sandal flicks, and it’s clearly a ripoff of The Omen that released a year previously. If the kid is the Antichrist, why does he need nuclear weapons? We need a Blu-ray release of this film to find out. You can’t understand what the trailer is saying, but at least you can enjoy the ridiculousness of it all.

Update: As of May 2019, Scream Factory has released this film on Blu-ray, albeit as The Chosen.

The Cars That Ate Paris

Part of the criminally underrated “carsploitation” genre, The Cars That Ate Paris is actually an Australian movie despite its title suggesting a Frenchian locale. It’s actually Paris, Australia, and people in this small town are terrorized by dangerous car driving, including a car riddled with spikes that looks straight out of Mad Max. It makes sense that this film is Australian, actually; they do damn good car chases. If you enjoy stuff like Duel but think having only one car is too tame, then The Cars That Ate Paris is for you and you can join our petition to get this thing a proper Blu-ray.

Right along with the carsploitation genre is the vansploitation film series, of which there are only a few. Van Nuys Blvd is one such vehicle romp that, unlike carsploitation, focuses on how much fun one person can have with a supercool pimped-out ’70s van without, you know, the whole pedophilia thing attached to it. Nah, this film is all about a dude cruising around town, experiencing drag races and topless women (thanks to Playboy playmate Cynthia Wood, who definitely conjures up her namesake) on the tituler Van Nuys Boulevard. Dumb comedy romp? Absolutely. Worth a recheck on Blu-ray from a label like Vinegar Syndrome? You betcha.

Abigail Leslie is Back in Town

No trailer on the Internet for this one, probably because it’s too HOT. But this softcore porno/romance starring Jennifer Jordan as Miss Abigail who is back in town tackles a number of things: mainly sex, lesbianism, and the messiness of returning to a place where one might have a less-than-savory reputation. Again, this is another good release for a label like Vinegar Syndrome of Impulse Pictures – it’s right up their alley, if you get my sexual innuendo.

I’m not entirely sure why Melvin Son of Alvin, a sequel to the raunchy Alvin Purple, has not been released on Blu-ray yet. The opening credits feature more nudity than most films and a Jaws homage, but instead of a fin, it’s a boob piercing the what I assume is very frigid water. How can you not want this movie on glorious HD?!? The film is Australian, so there is hope that maybe Umbrella Entertainment will release it. Let’s let them know we want Melvin Son of Alvin on Blu-ray!

Secrets of the Phantom Caverns

Another underground cave-dwelling film that seems to be like The Descent, but years before, more sausage to save the day, and way cheesier. Okay, so maybe not all movies deserve a Blu-ray release, but to me, this seems like one film that could find some new fans with an HD release.

Before The Expendables was released upon us, we had Kill Squad! starring Jean Glaudé (minus the C, minus the Van Damme, and minus everything else we love about that short little fella.) Hey, at least the tagline is pretty sweet! 12 Hands… 12 Feet… 24 Reasons to Die! Awful, low budget action flicks is why Blu-ray exists in the first place!

Vaginal probes? Check! Female killer? Check! Loads of nudity? Double D Check! Why hasn’t Inseminoid been released on Blu-ray yet? I mean, come on, Breeders has been released, and this film looks to be in that same type of cheesy flick all us horror fans love.

Update: This film is soon to be released as part of the Bloody Terror: The Shocking Cinema of Norman J. Warren, 1976-1987 collection from Indicator on August 12, 2019.

Hanako of the Toilet

Despite the goofy-sounding name, Hanako of the Toilet (based on Japanese legend) is a creepy Japanese film about ghosts and curses that should fit right at home with the other J-horror films like Ringu and Ju-on. It’s also unfortunately missing from the world’s Blu-ray shelves besides a Japanese import, something that either 88 Films or Arrow Video could immediately rectify (it certainly fits within their wheelhouses). Hopefully we’ll see this one hit sooner rather than later – who doesn’t love a good bathroom ghost?