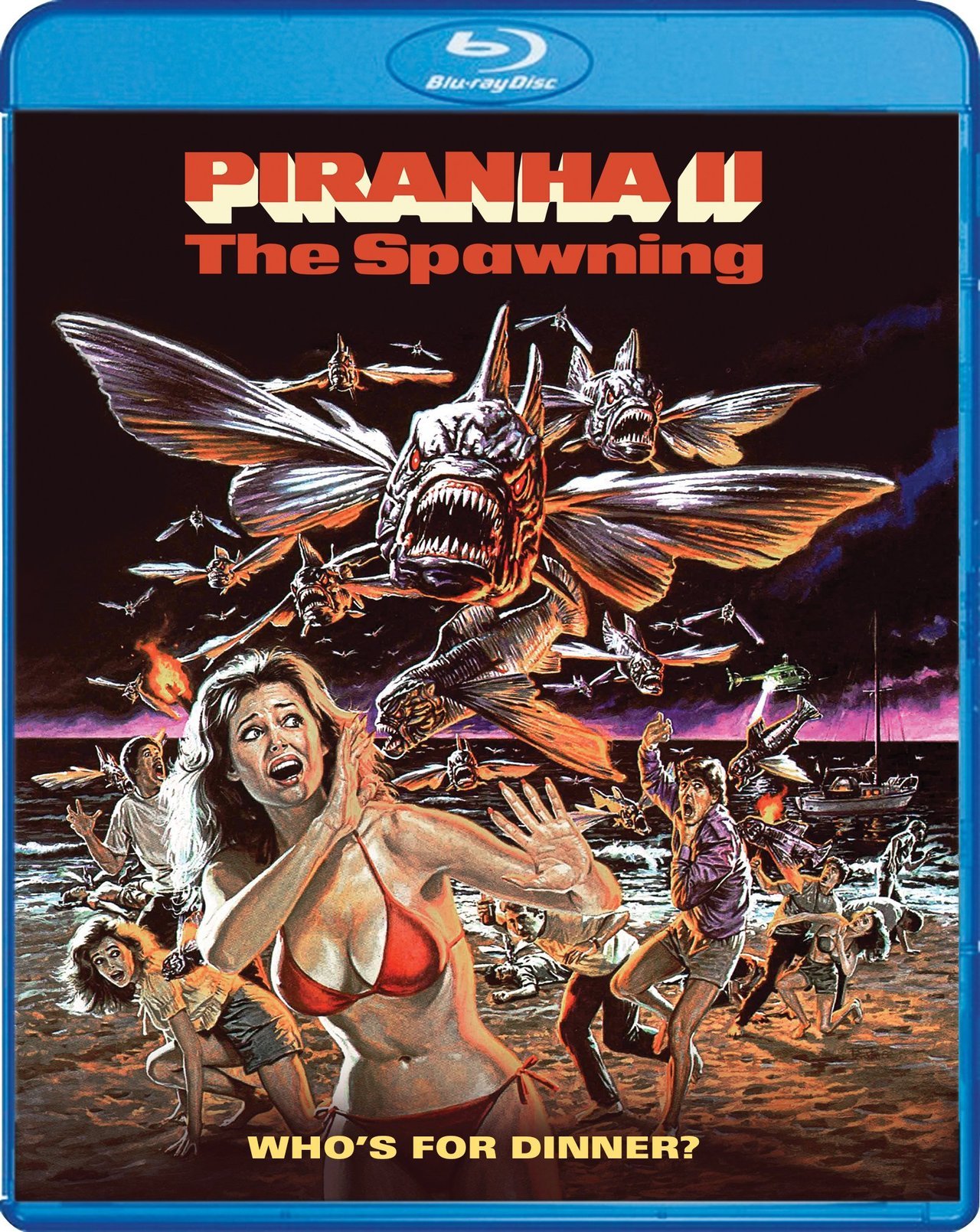 Piranha II doesn't reach the quality of the first film, but its awfulness translates to a cheese-filled fun time, especially if you have some booze in your system. Scream Factory has released a solid Blu-ray that does justice to a film that may or may not deserve it.
Film
Blu-ray
Reader Rating0 Votes
4.1

The Piranha have evolved! Now they fly and no one is safe. A scuba-diver instructor, scientist, and a local cop team up to save the day, but will the head owner of the resort listen to their pleas to get everyone out of the water? Come on, what do you think!

I’m going to admit something pretty embarrassing right now; I’ve never seen Piranha II: The Spawning until I popped in Scream Factory’s Blu-ray. I knew it was James Cameron’s first film he directed (even if he doesn’t want to admit it) and I knew there were flying piranha in the movie. The truth is I thought the first Piranha, directed by Joe Dante, was the second Piranha. Boy was I wrong.

Piranha II came out three years after the first film, and right away you can tell the movie is an Italian/American collaboration. Why is that you ask? Well, for one the lousy dubbing of several actors; also, the entire opening credits are filled with a bunch of hard to pronounce Italian-looking names. The flick was originally going to be directed by Miller Drake, but things didn’t work out and in stepped James Cameron (who later was supposedly fired as well).

The premise for Piranha II is, well, ridiculous to say the least. The military is still messing with nature and has combined a bunch of species to create the ultimate aquatic nightmare. No longer are you safe on land, as now the piranha can fly (an early mechanical effect that Mr Cameron would go to perfect in Aliens for the facehuggers). A resort happens to be close to a batch of the deadly piranha, and for some reason, the piranha waited until some sexed-up scuba divers get down and dirty in a navy shipwreck. Eventually, the murders start happening on land as well. Thankfully Lance Henriksen is the local police, who is ready to save the day. Ha, kidding, Lance flies a helicopter the entire film looking for his son who has wandered off to make whoopie with a big-breasted chick.

Piranha II is low budget cheese at its most beautiful (?). It’s got laugh-inducing special effects, awful acting, a head-shaking story, and ample amounts of breasts to fill the screen. Plus, we get some pretty gnarly gore that will please gorehounds. It’s not a great film, nowhere near as good as the first film, and the ending leaves a lot to be desired, but darn it, I did find myself laughing a lot and enjoying this terrible flick.

Loads of rubber piranha attacking the necks of people. We see the aftermath of a few attacks, with chewed up bodies and gorged necks spurting plasma.

A breast here, a breast there, everywhere a breast. Okay, so the film isn’t going to win any awards for most amount of nudity, but what we are given is very much welcome, no thanks to you James Cameron (read interesting elements).

Scream Factory has released Piranha II: The Spawning on a Blu-ray with a new 2K transfer from the original camera negative. It’s a very nice looking transfer, with no distracting amounts of dirt or debris. Although not as sharp as some other releases, the film has never looked better.

The Blu-ray presents the film with a 2.0 DTS-HD Master Audio, and besides a few times where the movie sounds like it was still underwater, I had no issues with hearing any of the dialogue and the sounds effects of the piranha comes through crystal clear.

The Blu-ray has two 14-minute interviews, one with actor Ricky Paull Goldin, who reminisces shooting the film with Lance Henriksen and shooting the topless scene in the waterfall. The other interview is with Special Effects Artist Brian Wade, who talks about working with James Cameron and tries his darndest to say nice things about the movie. Rounding everything out is a trailer.