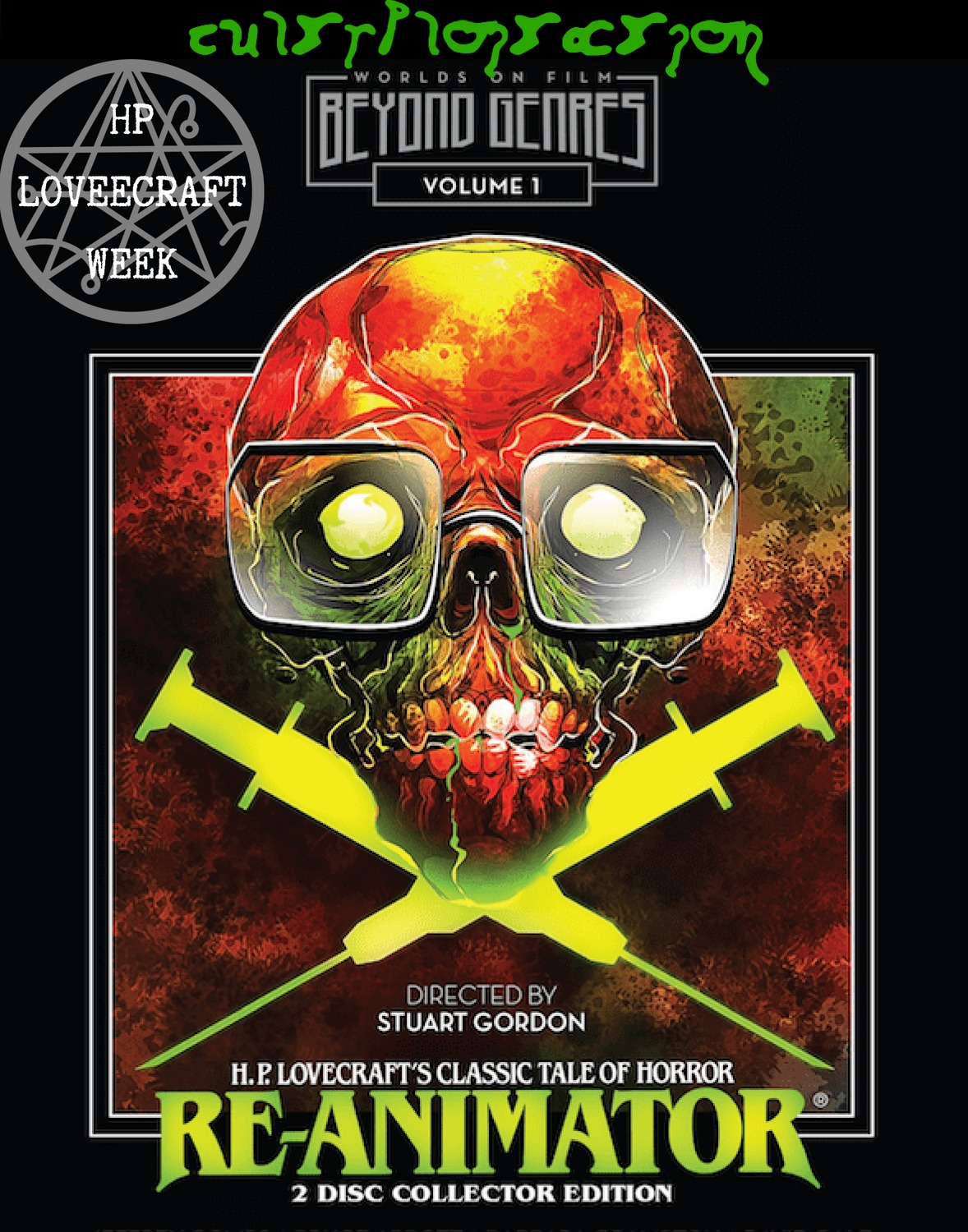 Umbrella Entertainment's Beyond Genres: Worlds on Film Blu-ray release of Re-Animator may not be able to compete with the sheer number of extras on Arrow's Blu-ray, but it's still a gorgeous release worthy of collectors' love.
Film
Blu-ray
Reader Rating0 Votes
4.5

Welcome to HP Lovecraft week, primarily brought to you by Umbrella Entertainment thanks to their multiple Lovecraft-themed releases currently on Blu-ray. For our first day, we’re taking a look at one of the most beloved Lovecraft-inspired horror films of the modern era, Re-Animator. It’s a cult classic first and foremost, one that does not gain that classification due a so-bad-it’s-good nature. Instead, Re-Animator showcases both Lovecraftian influence and the more contemporary styling of an ’80s film, all to its benefit.

The film follows along with the exploits of Herbert West (Jeffrey Combs), a highly intelligent medical student who has studied under the tutelage of a slightly eccentric doctor who has contested the usual science behind brain-death. Notably, West believes that life can continue after death as long as the brain is somewhat preserved; after being given a special elixir, the dead can be revived. Unfortunately, the elixir does come with some unanticipated consequences, chief among them a violent id-like reaction to stimuli.

Director Stuart Gordon very loosely follows the plot of Lovecraft’s “Herbert West – Reanimator,” ditching a lot of the archaisms of the short story for a more advanced look at reviving the dead. In many ways, though, Re-Animator retains elements that Lovecraft would have appreciated: themes about forbidden knowledge, man’s obsession, and the occult disturbances that messing around with life’s biggest secrets can bring. But Gordon adds a lot of black humor along the way, transforming what could be a shambling moody plot into something campier.

It’s all aided by Combs, who lands his niche character well; line deliveries make up the bulk of the comedy – “Cat dead, details later” being the funniest – but also helped along by West’s ridiculously cavalier attitude toward his studies. Bruce Abbott as Dan and Barbara Crampton as Megan also make up a great ensemble cast, most of them simply reacting to West’s eccentricities.

But the other great element in Re-Animator is its special effects work, which features surprisingly well-done practical effects that hide some of the zippers in comical fashion. The headless scenes in particular use camera angles and editing to the film’s advantage, and while Re-Animator never takes itself seriously enough to worry about bad design – like the twice dead cat – it aids the film to have such strong work behind the scenes.

While Re-Animator ditches a lot of Lovecraft’s later story premise, it’s difficult to imagine a viewer who doesn’t find anything to enjoy about the film. Gordon does a great job making it accessible while also interesting to gore fans, pushing the envelope with gags and getting the most out of Crampton’s… assets. It’s no wonder that Re-Animator has survived all this time, and its current revival on Blu-ray ensures newer viewers have an opportunity to witness a culture classic.

Umbrella Entertainment has given Re-Animator a UK/Australia Blu-ray release that does have to compete with Arrow Video’s loaded set. However, this is another strong offering from the company. Video is presented with an HD scan of both the unrated and the integral cut; the unrated version is 86 minutes long and contains all uncut footage, while the integral cut is an edited version that includes extra scenes and extended footage that was an attempt to give further characterization and backstory. Both versions look great, with some medium-heavy grain presence and excellent clarity. A few lines appear throughout but ultimately this looks just as good as Arrow’s Blu-ray release.

Audio is a 5.1 DTS-HD Master Audio track for both that sounds great with no issues – and Richard Band’s Psycho knockoff theme shines through. English subtitles are also included.

Extra features are generally ported over from other releases, including a feature-length documentary about the film called Re-Animator Resurrectus; interviews with Stuart Gordon, Brian Yuzna, Denis Paoli, and Richard Band; a brief discussion about the film with Tony Timpone; music analysis with Richard Band; TV spots and theatrical trailers; and two audio commentaries, one with Stuart Gordon and one with Brian Yuzna, Barbara Crampton, Bruce Abbott, and Robert Sampson. The first disc with the uncut film also contains the deleted scenes and extended footage included on the integral cut.

Umbrella’s extras are certainly no match for Arrow Video’s teeming release, but this special Beyond Genres: Worlds on Film release is well worth it for those not looking to spend the extra cash for extras – this contains everything you’ll need to enjoy Re-Animator. It also comes with the special slipcover and reversible artwork, certainly a draw for collectors who want to own all of the Beyond Genres releases.