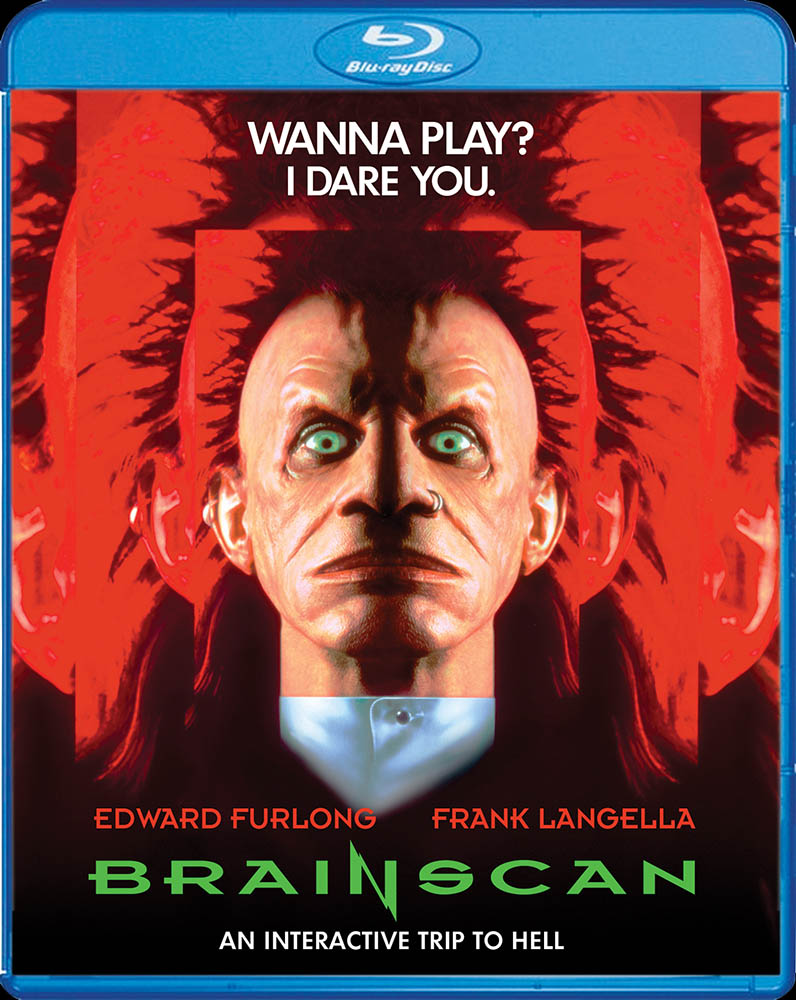 Let’s start things off first by laying down the truth right away. The mid-90s was not a great time for horror films. I’m not entirely sure why, but maybe it was the clean look, the terrible clothing choices, the awful CGI, and the even more terrible choice of music. However, not all was bad; case in point, the 1994 sci-fi horror flick Brainscan. Sure, Brainscan has pretty much everything I’ve mentioned above, except terrible music – yet there is something about this film that makes me smile every time I pop it in.

Just as computers were starting to crop up in everyone’s home (well, almost everyone as I never got a computer until the early 2000s in my first year of college) Brainscan capitalizes on that trend by producing a story about a killer new PC game that will blow your mind with its revolutionary new use of hypnosis. Edward Furlong (a few years after his previous stint in horror Pet Semetary II) plays Michael, a Fango-loving horror fiend, who, when he is not busy being a creepy creep by spying on his next door neighbour (no really, he actually records her in her bedroom, but she seems not to care. My kind of gal to be perfectly honest) runs the horror club at school. His best bud for life, Kyle, tells him about Brainscan, and Michael orders it right away and begins playing. After popping in the first disc and playing through the eyes of a killer, Michael is hooked, but the next day he sees on the TV a news report about a local murder, the same murder he “played.” Dun dun dun!

Michael tries to stop playing Brainscan, but The Trickster (an action figure needs to be made of this guy. NECA get on it!) manifests in Michael’s room and makes sure he is a good horror boy by continuing the game. As the murders pile up, and the cops (Frank Langella) are hot on his trail, everything starts to spiral out of control.

What makes Brainscan such a fun movie, and deserving of a pretty kickass Blu-ray from Scream Factory? Honestly, it boils down to the flick’s ability to provide the viewer with some genuinely mindless fun, especially if the said viewer is a horror fan. The Trickster is a hoot of a character, and the premise, although dated nowadays, is pretty ingenious. Mind you, things aren’t all great, as the ending of the film is not as well planned out as the rest of the film. Sure, I enjoy a twist here and there, but Michael’s reaction to everything is a bit over the top. Also, watching Edward Furlong hoover down greasy chicken and warm milk is something that will stick with me forever.

Scream Factory might not have slapped the Collector’s Edition logo on the Blu-ray cover, but this one definitely deserves the honour as it’s jammed packed with special features, a reliable video transfer, and audio that delivers that heavy metal rock through your speakers loud and clear.

Features provided range from a new commentary with Assistant to the Director (so not the assistant director?) Tara Georges Flynn, an interview with the screenwriter, a fun interview with The Trickster himself T. Ryder Smith, a look at the special make-up effects, the score, and some vintage behind the scenes, deleted scene, trailers and still galleries. Lots to peruse through.

Brainscan deserves a spot on your shelf next to that pile of old CD-ROM games you’ll eventually get around to playing. Just be careful when pressing play, as you never know what The Trickster will have in store for you!

Brainscan's tech may be outdated, but the premise is fun, and the Blu-ray from Scream Factory is Collector's Edition quality.
Film
Blu-ray
Reader Rating0 Votes
4.4
Hosting screenshots is expensive. If you want to see more galleries, consider donating!

Who Can Kill a Child? Blu-ray Review (Mondo Macabro)