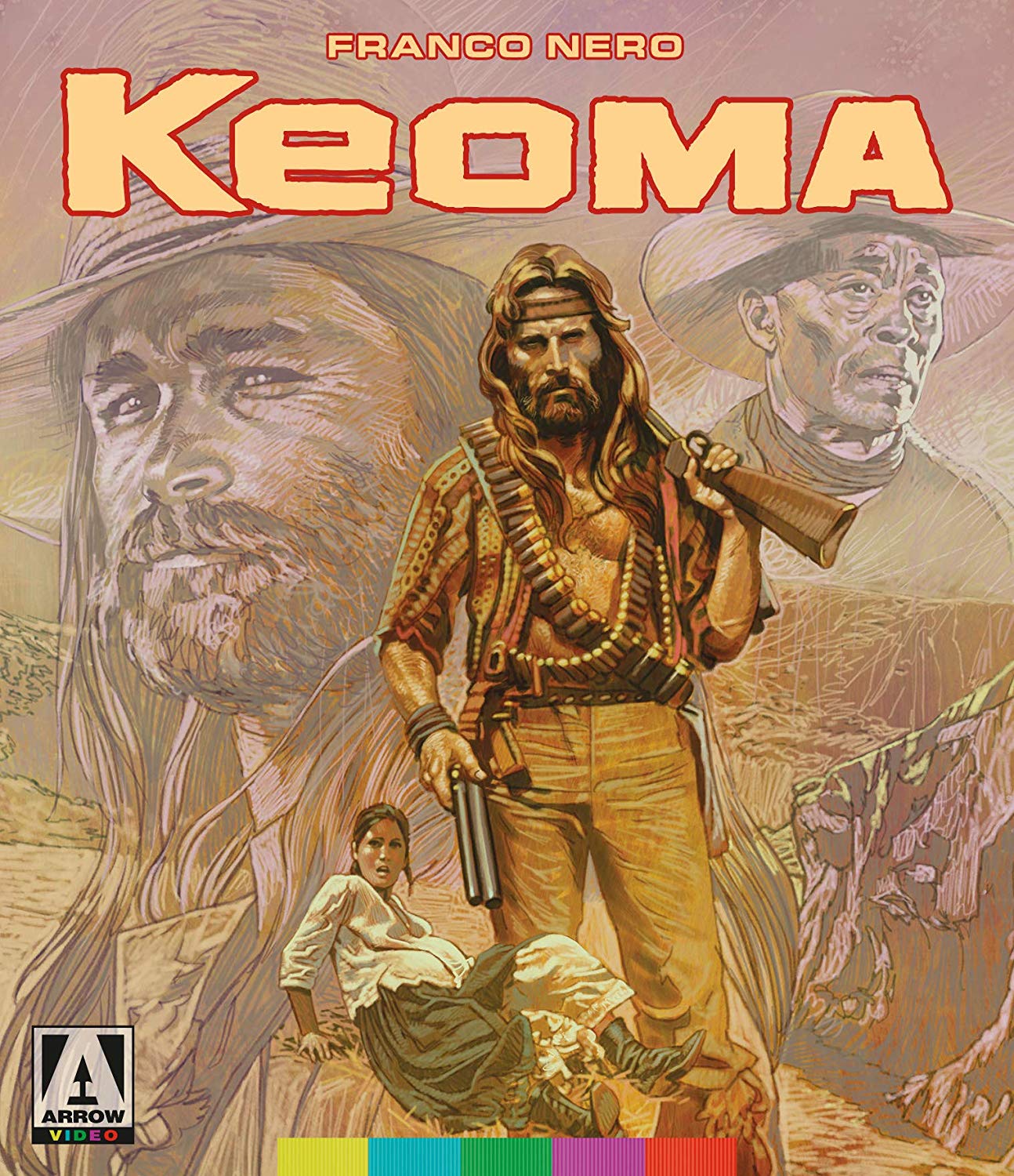 Keoma offers a disjointed story thanks to the fly by the seat of your pants directing, and plenty of unintentionally hilarious moments. Arrow Video Blu-ray offers solid video and plenty of features.
Film
Blu-ray
Reader Rating0 Votes
4
Buy
Amazon

Keoma, released in 1976, and directed by Enzo G. Castellari, stars Franco Nero, in what is yet another attempt at capturing the success of Sergio Leone’s Man With No Name Trilogy. Although it fails to be as good as the Clint Eastwood led trilogy, it still manages to offer up some impressive set pieces and shootouts. The story is the typical “cowboy wanders back home to confront outlaws and save the day,” but the film incorporates the plague, racial tension, and a lead who is prosecuted for being half-Indian. Franco Nero, of course, is nowhere near Indian, but he sure does look amazing in that long ass wig.

Keoma tends to lean towards the unusual in regards to the choices the creators went with. This is mainly because the script was disliked by both the director and star of the film, so it was rewritten as they were filming. It tends to give the movie a scattered story that struggles to keep a cohesive storyline going. Slap an incredibly out-of-place soundtrack on top, and you have a recipe for a quirky spaghetti western that was going to have a hard time impressing many people back in the day. Nowadays, because of the odd choices, the film is looked at as a cult classic. Does it deserve the status? Some may argue no, but as the 105-minute runtime winds down, I found myself enjoying the film. Said enjoyment is capped off with a stunningly, albeit unintentional, comedic ending.

Arrow Video have released Keoma on Blu-ray, featuring a 2K transfer from the 35mm camera negative. Arrow Video has this to say about the transfer:

Keoma is presented in its original aspect ratio of 2.35:1 with Italian and English mono audio. The original 2-perf 35mm camera negative was scanned in 2K resolution at EuroLab. The film was graded on Digital Vision’s Nucoda Film Master and restored at R3Store Studios. Thousands of instances of dirt, debris, scratches, picture instability and other instances of film wear were repaired or removed through a combination of digital restoration tools and techniques. The mono Italian and English language tracks were remastered from the original sound negatives at Deluxe Media, Los Angeles. The audio synch will appear slightly loose against the picture, due to the fact that the dialogue was recorded entirely in post-production, as per the production standards of the period.

All original materials used in this restoration were accessed from Surf Film.

Overall the transfer looks crisp and clean with minimal grain presence, very little damage, and an overall attention to clarity that shows its strengths during close-up shots. Arrow Video has done an excellent job with the 2k transfer and this looks far better than the previous Blu-ray release from Mill Creek (pictured below thanks to caps-a-holic.)

Audio is provided in both English and Italian LPCM mono tracks. Both tracks feature dubbed performances so you can expect a bit of out of sync issues, which Arrow Video notes in the details about the transfer.

Extra Features offer plenty of new interviews with the cast and crew. We also are offered a look at Keoma and its place in the spaghetti western genre. For a further look into the features, please check out our extensive Blu-ray Gallery.

Keoma offers a disjointed story thanks to the fly-by-the-seat-of-your-pants directing, and plenty of unintentionally hilarious moments. It also features a soundtrack that needs to be heard. This all accumulates in a western that cult film fans should be happy to check out. Arrow Video offers a lovely Blu-ray, with plenty of features for fans to dive into. Recommended.